Voices and instruments combine to make a joyful noise 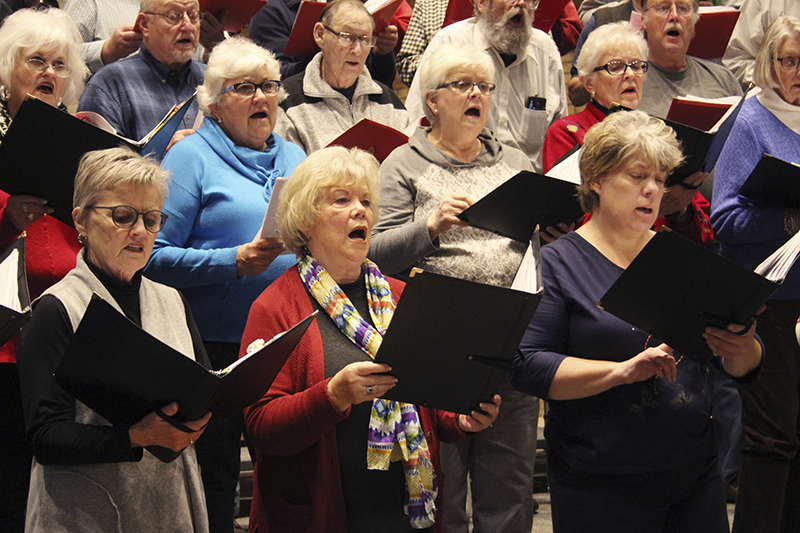 Members of Faith Tones and Harmony Junction come together for a group rehearsal Tuesday ahead of the weekend concerts. Sarah Kocher/Albert Lea Tribune 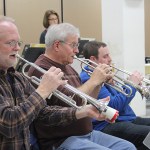 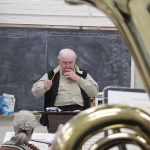 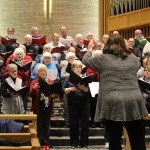 Lora Virgil starts the choir up on her favorite piece for the concert. Sarah Kocher/Albert Lea Tribune 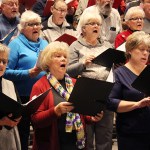 Members of Faith Tones and Harmony Junction come together for a group rehearsal Tuesday ahead of the weekend concerts. Sarah Kocher/Albert Lea Tribune

Some of the Christmas that is in the air will be coming out of the lungs of approximately 80 musicians tomorrow afternoon and evening.

Sunday’s Christmas concerts feature a trifecta made up of all-male Harmony Junction and all-female Faith Tones choirs and the Albert Lea Community Band.

“I just think that with Christmas being so commercialized and so busy for people that it’s just really my sincere hope that people will just come and sit and breathe and, you know, just relax and enjoy the music and let it speak to them,” Harmony Junction and Faith Tones director Lora Virgil said. “You know, and I understand that there are people out there that aren’t too joyful at Christmas time … but I just hope that they’ll come and let the music touch them. That’s my biggest hope.”

Virgil said the two choirs are shooting for more performances together.

“The Christmas concerts went so well and it was such an amazing sound to have all those voices together that that’s kind of why we’ve tried to carry on the new tradition,” Virgil said.

“I think that’s the biggest thing, is you know the attendance has grown since we’ve combined the show,” Virgil said.

The community band has a few less.

“We only have two rehearsals, so we’ve got to keep things familiar with the band members,” Weisgram said.

“It’s going to be amazing, with over 50 voices,” Virgil said.

Weisgram said the audience can expect a mix of secular and nonsecular music.

“I think they like it because it’s a rather light concert,” he said. “To go to a church and hear pop music, I don’t think people expect that.”

The choirs will be singing new music this year, and for the second time since the groups have combined, there will be an opportunity for a sing-along.

Weisgram said the band will be playing some new songs as well as a few repeated tunes. Some of the repeats are because the band lost some of their Christmas music throughout the year. The band is applying for 501(c)(3) status, which Weisgram hopes will allow for more money to replace music and diversify the repertoire from year to year.

But there are some firsts this year. The band will be playing prelude music for the first time, and it is also the first year the second performance will be offered at Grace Lutheran Church instead of St. Theodore.

“I think they feel like the Salvation Army is a good place to give the money because Salvation Army, you know, reaches out to so many people,” Virgil said.

“What we’re doing is valuable,” Weisgram said. “It affects the community and it’s a real help. … I think the band is proud of that.”

But according to Virgil, the groups are getting something out of it, too.

“The biggest joy for me is just to see the smiles on my singers because they are so excited and they’re so proud that they are doing this, you know,” Virgil said. “Because most of them are just your average singers that just, you know, they don’t have trained voices or anything, but they just like to sing. And they just get so excited when we come all together and we learn our music and we are finally ready, and they just are proud. … I just love that. I love to see the joyful expressions on their face.”

How much: Free-will donation for the Salvation Army