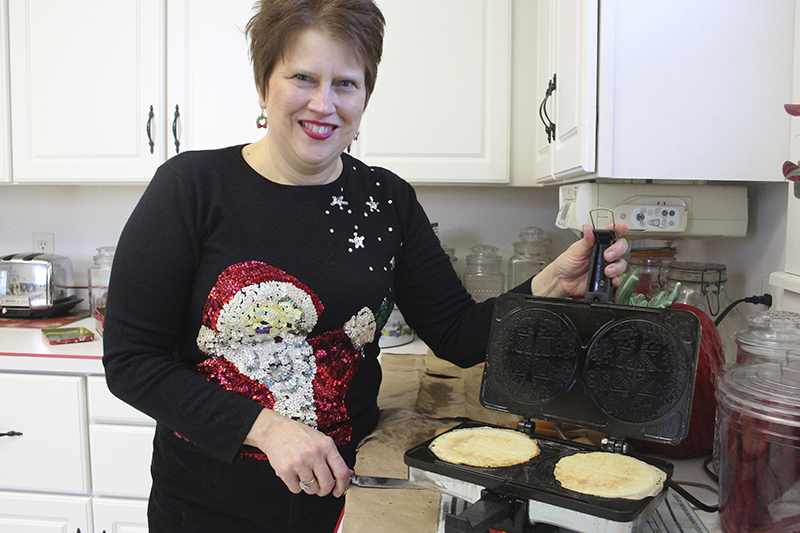 On krumkake day, the baker’s house is filled with the invisible presence of warm vanilla. That vanilla has been working together with eggs, sugar, butter, half-and-half and flour to make, over the course of the Christmas season, almost 650 krumkakes in Mary Jo Volkman’s kitchen.

Krumkake means crooked, curved or bent cake. It is the name of the Norwegian Christmas cookie Volkman remembers learning from her father, Johnny Anderson, who was 100-percent Norwegian.

“He’d sit on a little stool and I’d help him make it,” she said. They started with a single krumkake iron on a gas stove, but Volkman uses a double iron now. It’s reminiscent of a waffle iron with a Scandinavian pattern grooved into the iron’s surfaces.

Although she remembers making it since childhood, Volkman didn’t begin selling her homemade krumkake until 2013, four years ago.

“Four years ago, it wasn’t a very good year,” she said. She had two long-time pets die, her father died at 90 years old, and she lost one of her jobs. Volkman said come November, she didn’t know what to do. 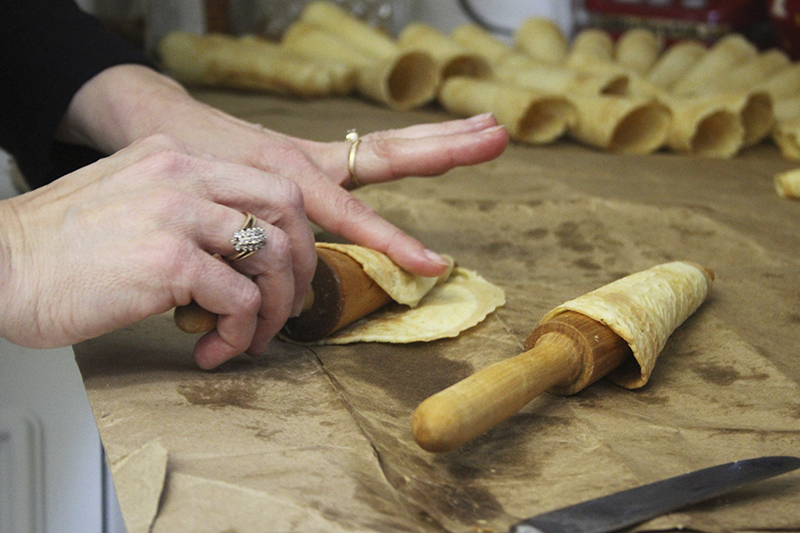 Mary Jo Volkman rolls the krumkake around the wooden pins with the seam down so the treat can hold its shape while cooling. –
Sarah Kocher/Albert Lea Tribune

“I don’t know how it just popped into my head to start selling krumkake to help me make my house payment for January,” she said.

Volkman said the response that first year was substantial. People were hungry for it, her husband Neil Volkman said.

“I just started getting orders and that first year it was like, ‘Neil, I’m gonna be busy! Oh my gosh, you’ve got to help me!’”

This year, she has sold 53 dozen krumkakes, largely in orders for two or three dozen.

Erin Bennett and her family are in the three dozen category.

“We have now taken on her family tradition in our household by eating her krumkake,” Bennett said. (Her family is mostly Irish.)

Bennett puts it out at family gatherings with in-laws, parents, children and relatives, but she’s careful about how she does it.

“They all really enjoy it,” she said. “I literally put it out in like, three batches, because I don’t want it all to go right away.” 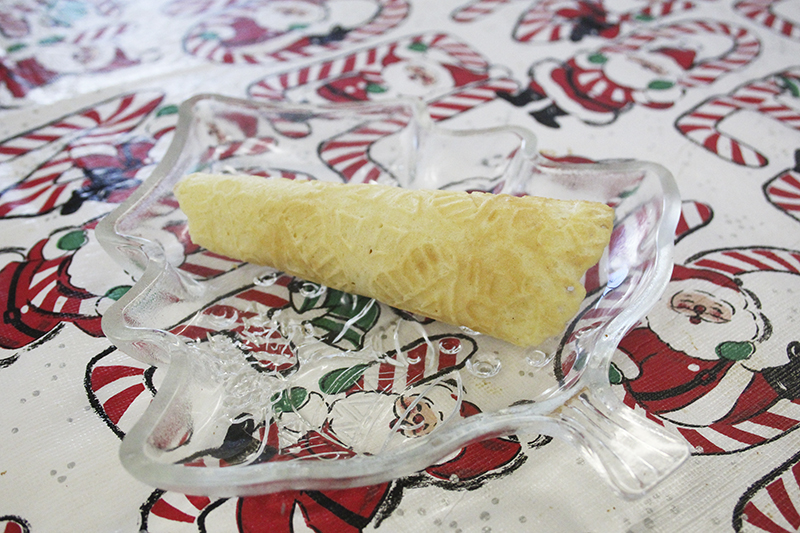 The iron stamps the krumkake with a Scandanavian design. –
Sarah Kocher/Albert Lea Tribune

Bennett said she’s glad she is able to get the krumkake from Volkman, because none of her family has experience with Norwegian baking.

“It’s kind of an extra special treat because none of us would even know where to start,” Bennett said.

However, Volkman said many of her customers do make that Norwegian connection with her krumkake.

Volkman’s father Anderson owned a bakery in Northwood, where he met his wife before they moved to Albert Lea. Volkman guesses the recipe came from her aunt, who is 103 years old this year. In addition to extra income, then, that first year the krumkake process was also soothing. Her father had shown her, step by step, how to make it the Christmas before he died, when he made it for relatives.

“It was good therapy for me to remember how he was telling me how to make it,” Volkman said.

The krumkake is wafer-thin and breaks apart into unpredictable chunks after the first bite. The vanilla comes through, as does the butter.

Volkman still makes her krumkake one batch at a time. Each batch will make about four dozen krumkake (depending on how large her eggs are) and takes about 45 minutes. For her 53 dozen, she will wrap up the season with just under 10 hours of krumkake-baking under her belt.

After work, she comes home to mix the batter, let it stiffen and cool it on her front porch overnight. The next day, she’ll spend half an hour with her krumkake iron baking off a batch.

Volkman remembers her father baking other traditional Norwegian Christmas cookies, things like rosettes and spritz and fattigmand. Krumkake is what stuck around. It helps her relive memories of her dad.

“It’s just been a part of my heritage as long as I can remember,” Volkman said.

Now, her daughter is asking Volkman to teach her how to make krumkake.

“I want to keep the tradition of the Norwegian krumkake, of Norwegian food, alive,” Volkman said.