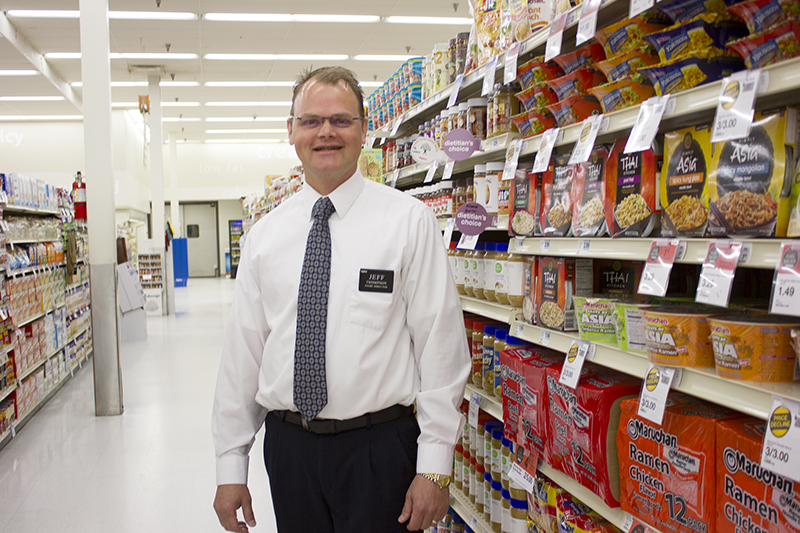 On a Tuesday morning, new Albert Lea Hy-Vee Store Director Jeff Thompson greeted customers in the building, a sign of the approach he plans to take in the position.

“Growing up, I liked to cook as a kid,” he said. “I always helped my mom in the kitchen and stuff, so I thought I wanted to be, used to be a deli back then, but I wanted to manage that department.”

A friend helped Thompson find his first job at Hy-Vee, and he washed dishes his first day on the job. A part-time employee, he was hired on a full-time basis in Iowa City, Iowa, where he worked in the kitchen for a couple Hy-Vee stores.

Thompson then moved to New Ulm, where he was kitchen manager for about one year.

“That wasn’t really right for me and I wanted to do more and thought the store director position looked pretty good, and so I decided to take that path,” he said.

Thompson also worked in Burlington, Iowa, and Sioux Falls, South Dakota, before moving to Canton, Illinois, later shifting back to Sioux Falls. He then took a store director position in Bethany, Missouri, where he served for a little more than three years.

Thompson worked in the downtown Mankato store for nearly four years before moving to the Albert Lea Hy-Vee.

“I’m excited,” Thompson said. “It’s very similar to the Mankato store. It’s still the Hy-Vee family. We talk about the ‘helpful smile in every aisle,’ and the great thing about Hy-Vee is no matter what store you get to, it’s like-minded people — people that like to take care of others.”

Thompson said he enjoys the small-town atmosphere Albert Lea affords and credits customers with helping him have a good experience so far.

“It’s been good,” he said. “People are great. A lot of customers have already introduced themselves.”

Though Thompson’s job is setting expectations and standards for the company, he plans to be on the store floor taking care of customers, which he said is his favorite part of the job.

Thompson hopes to build relationships and make customers feel like they have ownership of the store.

“That’s what it’s all about, is this is the customer’s Hy-Vee,” he said.

Thompson referenced cooking shows that motivate people to cook recipes based on the programs. He informed Hy-Vee employees they need to know how to help with such requests and have permission to look on their phones to find the right answer.

“We become their expert, and it’s hard to find that in other places,” Thompson said.

“I’m just excited to be here, and my plan is to be involved in the community and be a part of Albert Lea,” he said.

Hy-Vee employee Lisa Reichl said she enjoys that Thompson interacts with customers and is willing to perform basic tasks.

“He’s very personal,” she said. “He’ll come to you instead of the chain of command. He’s very hands-on. He will bag groceries.”