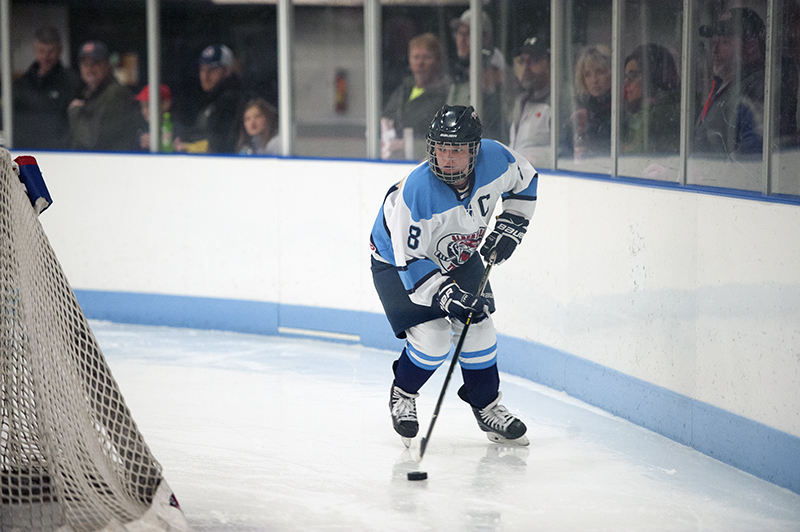 Albert Lea senior Maddy Carstens secures the puck behind the net in Saturday's win over Waseca. Carstens finished with one goal and one assist. - Tyler Julson/Albert Lea Tribune

The Albert Lea girls’ hockey team hosted Waseca Saturday night hoping to get back on the winning track after losing its last two games.

The Tigers used a two-goal third period to separate from the Blue Jays and win the game, 4-3.

It looked like the Tigers might be in a bit of trouble to start the game, as they gave up a goal just three minutes into the opening period. However, they stormed back and would take the lead for themselves before the first period was over. The first goal was almost five minutes into the period from Mia Fjelsta, assisted by Esther Yoon and Josie Venem. The go-ahead goal was scored by Rylee Bjorklund and assisted by Lucy Sherman with just over nine minutes remaining in the period.

The Blue Jays would even the game at two in the second quarter and send the game to the final period at a 2-2 tie.

The Tigers were able to take the lead once again less than five minutes into the final period with a goal from Alli Dulitz. She was assisted by Maddy Carstens and Katie Steven. They would widen their lead just a few minutes later with a goal from Carstens with an assist from Steven.

Albert Lea would take a comfortable two-goal lead into the final minute of the game when Waseca would score a goal with 28 seconds remaining. The goal would prove to be too little too late for the Blue Jays, as the Tigers would hang on to win.

The Tigers climb to 5-11 on the season and will play again Tuesday when they host the Luverne Cardinals.