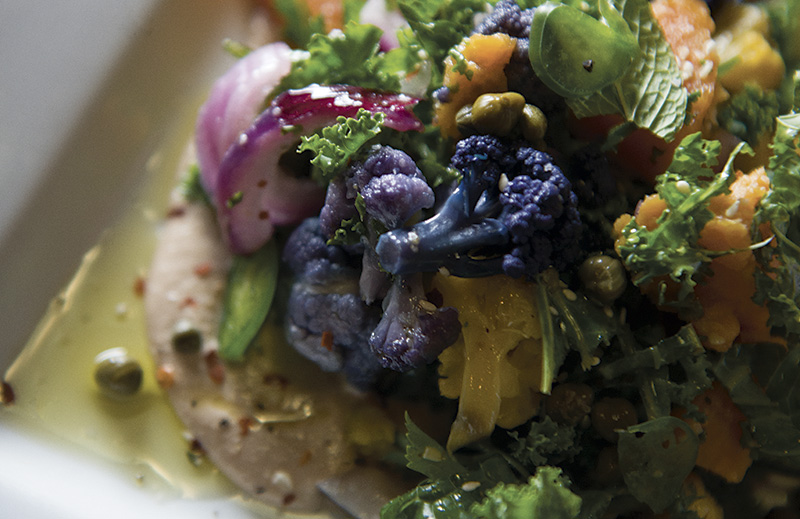 A colorful dish found at the Roberts' restaurant is a cashew tonnato with roasted vegetables. - Colleen Harrison/Albert Lea Tribune 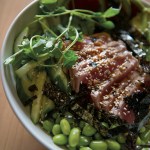 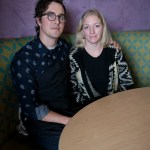 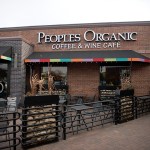 The Edina Peoples Organic location is in the Galleria at 3545 Galleria. – Colleen Harrison/Albert Lea Tribune 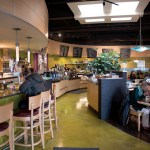 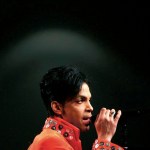 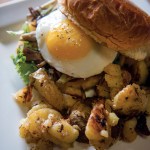 One of the featured sandwiches in Roberts’ restaurant is made with wild mushrooms, ricotta, a fried egg, brioche bun, sweet mix and a balsamic reduction and is served with house potatoes. – Colleen Harrison/Albert Lea Tribune 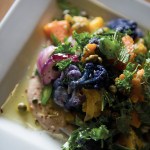 A colorful dish found at the Roberts’ restaurant is a cashew tonnato with roasted vegetables.

There were a few kitchens between Albert Lea and Paisley Park. Some of the most influential for Minneapolis chef and Albert Lea native Ray Roberts were those involved in dinner parties while Roberts was living in the Bay Area of California. They would take turns cooking.

“Living in Oakland and San Francisco, everything out there is hyper-seasonal,” Ray Roberts said. There was a variety of foodstuffs to play with, and this is where his interest in food blossomed.

But there were hints of it before then. There were the horticulture studies at the University of Minnesota, where Ray Roberts, now 36, was excited to learn where food comes from (but wasn’t serious yet about being a restaurateur). There was the restaurant work in Chicago, and the time working on an organic farm in central Wisconsin. It’s a survival skill he has turned into an interest, then a passion, then a job, then a whole life.

“I’ve always really been into cooking, just because it’s — you get the satisfaction of good food when you finish,” Ray Roberts said.

Now, in the kitchens he rotates between in the Minneapolis area, he enjoys playing with vegetarian cuisine, working with different grains like farro and barley, and Thai cooking. These kitchens belong to Peoples Organic restaurants, which in turn belong to Ray Roberts and his wife, Juell Roberts. They were both working at restaurants when the opportunity arose to start the flagship location in Edina.

Cooking for a legend

There is a small exception that spans 3 1/2 years. These are the years when Ray Roberts would work in his restaurants during the day and then drive to Paisley Park to cook for Prince.

There was a spontaneity to these meals that Ray Roberts enjoyed. He had to be ready to cook fast. One night, it would be a meal for one, and the next, a meal for 50.

“I really liked the creativity part because every day, I’d get to make whatever I wanted to, basically, without having to worry about a budget,” Ray Roberts said. “It was like, whatever you wanted to do, just go for it. Buy it, do it. As long as you know, it fit into his, what he liked to eat, then it was all good.”

When it started, Ray Roberts cooked his way through three auditions: first for some of Prince’s friends, then for his bandmates and finally for Prince himself. He had two hours.

“You had to get through like two layers of his friends and bandmates,” Ray Roberts said. There was also a formal interview with the tour manager.

“I think for Prince, it was also not just being able to be a good cook, but just being somebody he wouldn’t mind being around,” Ray Roberts said. “Someone he trusts, respects what he does and works hard.”

Ray Roberts said Prince was constantly cracking jokes. He would be around, practicing or watching basketball. He apologized when he was late for dinner. The Roberts also did some traveling with Prince and cooked for him on the road.

“It took me a while for me to get comfortable being around him, because he’s Prince,” Ray Roberts said.

It took a little bit to nail down Prince’s taste preferences, too. But Ray Roberts had help.

“(Juell) actually has the same appetite that Prince had,” Ray Roberts said. “One day I just came to the realization, ‘Holy crap. He eats just like Juell does.’”

So he started thinking to himself, ‘What would she like?’

“And then it got easier,” Ray Roberts said.

Easier, until it ended.

Since then, it has not been so easy to adjust. Juell Roberts said the aftermath of Prince’s death was such a whirlwind, there wasn’t time to grieve.

“It was really hard,” Ray Roberts said. “It took a long time to come down from that kind of Prince high. … I have my family, and so it was just time, I guess, to refocus on our restaurant and what’s next for us.”

A spirit of collaboration

Ray Roberts is back to working days. He said he is able to spend 60 percent of his time cooking. He’s also coming up with new recipes and training staff. Juell Roberts manages the front of the restaurant, so while they work a lot together, they also have different roles.

But their roles are not the only things that are different: they also come down differently on taste preferences. Just looking at the Peoples Organic menu, there’s a distinction.

“You can tell the different influences,” Juell Roberts said. The lentil burger? That’s Juell Roberts — she’s largely vegetarian. Ray Roberts likes more meat. She likes spicy food. He dials it back when he’s cooking for himself.

But the ideas come from everywhere. When Ray Roberts goes out to eat. When he reads. When he travels. When he learns things from other chefs. When he scrolls through social media (although he says it’s scary to say).

For the Peoples Organic franchise, the “next” means Ray and Juell Roberts are thinking about what it would look like to open another restaurant.

At home, it’s a third little one on the way. Ray Roberts said his two children enjoy cooking with him. They’re 3 and 5 years old.

“They like cooking it more than they like eating it,” Ray Roberts said. “If it could all be chicken nuggets and macaroni and cheese, they’d be happy.”

At the restaurant, he assimilates the things he loves to experiment with: there are seared ahi bowls, wild mushrooms and ricotta on soft brioche buns and cashew tonnato with roasted vegetables.

According to Juell Roberts, the results of his efforts are a product of Ray Roberts’ ethos.

“When it comes to Ray, I think he’s just worked incredibly hard, and he’s open,” Juell Roberts said. That’s not always the case she sees with kitchen managers. It’s what she thinks made him so well-suited to work for Prince: They shared a spirit of collaboration.

That, and they shared what Ray Roberts has shared with everyone who has walked through the door of a Peoples Organic: a meal.

“For me, it’s changed where it’s not just a job,” Ray Roberts said. “It’s my life at this point.”