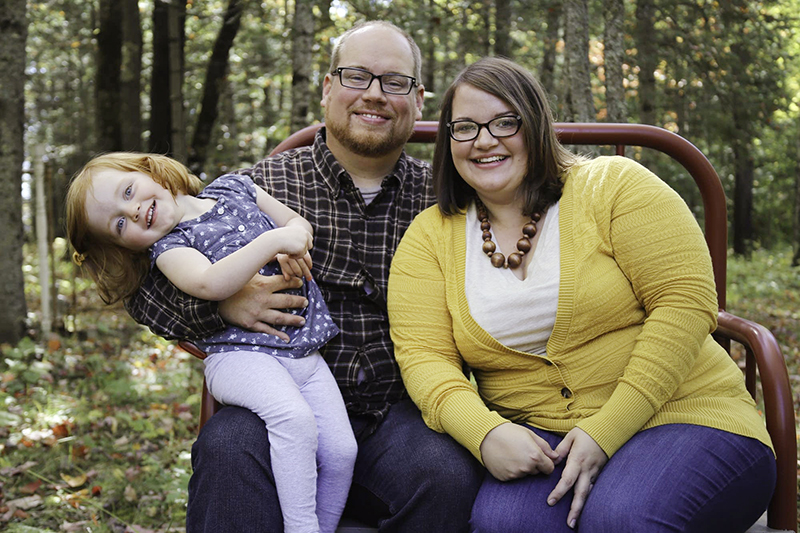 Matt and Julie Svatos said they hope their settlement with Fairview Health Services will ensure that people who are deaf — including their daughter, Stella — get access to interpreters when they go to the hospital. - Photo courtesy of Abigail Holkko with A Little Photography via MPR News

On May 4, 2013, Julie and Matt Svatos had their first child, Stella, at the Fairview Range Medical Center in Hibbing.

The delivery went fine, but the next morning, a doctor gave them some bad news: Stella might have a brain abnormality, and she needed several tests, including a CT scan.

Julie could hear the doctor, but Matt is deaf, and the sign language interpreter who was there for the birth had left.

So, the exhausted new mother tried figuring out how to hold her baby and sign to her husband at the same time, while trying to comprehend what the doctor was telling her. “It was hard,” Julie recalled, “and I felt that I couldn’t communicate to my husband everything that was going on.”

Over the next couple of days, the Svatos said, they continued to ask doctors and nurses for an interpreter, but never got one.

“They would just kind of ignore me as if I wasn’t there,” Matt Svatos said. “And they would only talk to Julie, as if she was the only one in the room. I just felt like they were treating me like a piece of furniture just standing there in the corner.”

When the Svatos got home, they filed a complaint with the Minnesota Department of Human Rights. Eventually the couple, and the state, sued Fairview Health Services.

The Svatos’ case is one of dozens of complaints filed against Minnesota hospitals in recent years — many in rural areas — where patients who are deaf, or their companions, say they aren’t getting the interpreter services that are required by law and are essential for them to make informed health care decisions.

Fairview has faced similar accusations before, too. In 2004, the health care network signed a consent decree with the U.S. Department of Justice and the Minnesota Department of Human Rights to provide sign language interpreters to deaf patients and their companions in all its hospitals.

The health care system faced two other more recent lawsuits in the past two years for allegedly failing to provide interpreters for deaf family members. Fairview settled one and prevailed in the other, although that decision has been appealed.

The company declined an interview for this story, citing health privacy rules. In a written statement, a spokesperson said it’s “our priority to provide interpreter services to facilitate effective communication between patients, their families and companions and the health care team.

“We want to assure you that Fairview does comply with the law, and we take our obligations under the law to provide effective means of communication very seriously.”

For patients like the Svatos family, the trauma from the experience lingers.

“It still makes me emotional after four and a half years,” said Julie Svatos. “This was our first and only child. I feel like that experience of becoming a parent, you know it’s the best day of your life, and then they took that away from us.”

Rick Macpherson, an attorney with the Minnesota Disability Law Center, said he has settled 15 cases against hospitals since Fairview signed that consent decree in 2004.

“It gets pushed way down the list of budget items,” Macpherson said. “This isn’t a very expensive item to fix. But I think many entities just push it out of their minds.”

Some hospitals, he said, don’t do a good job training their staff how to work with people who are deaf.

“It’s not just a favor for the deaf person, but it’s necessary for the institution to make sure they’re getting information correctly as well,” he said.

Hospitals in the Twin Cities, he said, have made strides in the past decade. Most of the complaints now are happening in greater Minnesota, where many hospitals are providing interpreters via video.

But Jessalyn Akerman-Frank, recent president of the Minnesota Association of Deaf Citizens, said that’s often not an adequate substitute for an in-person interpreter.

There are often glitches in the video, she said. And if the patient is lying down, they may not be able to see the screen.

Akerman-Frank said deaf people should be able to decide for themselves how they want to communicate.

Hospitals “don’t get to decide for us,” she said, “because we know our own effective communication, what the method is, and we would know best.”

But it’s often a challenge for hospitals to find a qualified interpreter.

“The main thing is we don’t have enough interpreters in our area to be able to fulfill all the requests that come in,” said Natalie Stanley, the sign language program manager at Essentia Health East in Duluth.

She said Essentia has a video system that works well for most situations in its rural clinics in Minnesota and northern Wisconsin.

If a patient wants an in-person interpreter, she said, they connect with video first, and then put out a call to interpreters in the area, to see if someone can cover in-person.

Last week, Fairview agreed to implement a similar protocol in a settlement of their case with the Svatos and the state. Fairview also agreed to improve training for staff, and report regularly to the state on the interpreting services it provides.

The Svatos also received a confidential settlement. But Julie Svatos said the most important aspect of the settlement is that Fairview has changed its policies, which she says should help provide equal access to care for people who are deaf — including her own daughter, Stella, who was found to be deaf shortly after her birth.

“I hope that she doesn’t have to still fight this when she’s an adult. I hope we can make some changes now.”