Funeral services for Burnette Edna Sanderson, 101, of Albert Lea, formerly of Glenville, will be at 11 a.m. Saturday at First Lutheran Church of Glenville. The Rev. Nancy Hansen will officiate. Interment will be in First Lutheran Cemetery in Glenville. Friends may visit with family one hour before services at the church. 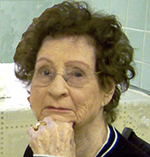 Burnette Edna Sanderson was born Dec. 16, 1916, to Bendick and Hilda (Erickson) Holstad in Montpelier, North Dakota. She was baptized in Ypsilanti, North Dakota. She moved with her family and grew up in the Northwood area, attending country school. The Holstad sisters were well known for their talented singing at many events throughout the area.

Burnette married Leon Sanderson on Nov. 8, 1935. They lived on a couple different farms until purchasing their farm east of Glenville. Burnette was a housewife and helped with the farming; she also worked at Land O’Lakes for a short time. In later years, the couple enjoyed yearly trips to Arizona and California, visiting Leon’s family. After selling their farm, Burnette and Leon moved to a home in Glenville. Burnette always enjoyed her family reunions, where she and her siblings would visit and sing. Burnette dearly loved her daughters and grandchildren and was very devoted to them. Burnette enjoyed dressing up, going out for supper, having coffee downtown, playing cards at Glenville Senior Citizens Center and taking her grandchildren to McDonald’s.

Burnette was a member of First Lutheran Church in Glenville and, until her health prevented it, she was a very active member of ladies aid and circle.