Candidates for governor make their case 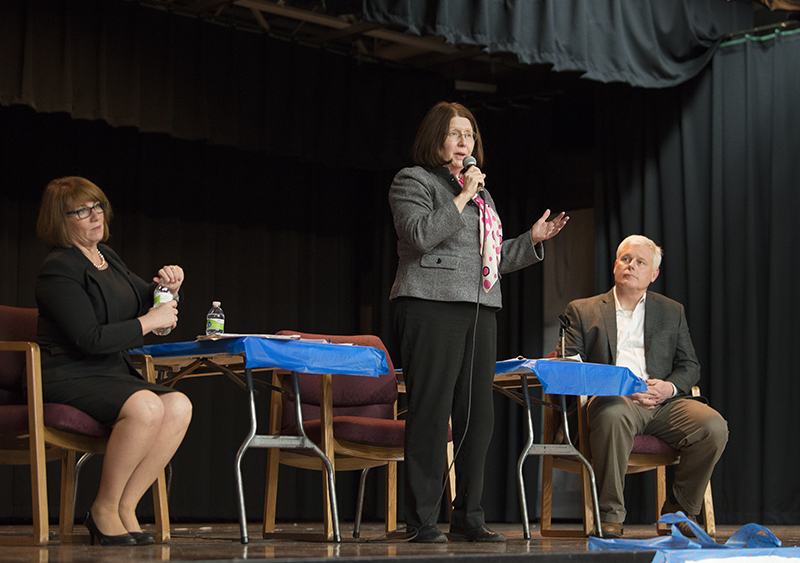 William Morris of Owatonna People’s Press, Jerome Christenson of Winona Daily News and Kelly Wassenberg of the Tribune posed questions for the candidates. The debate was moderated by Tribune Managing Editor Sarah Stultz.

On taxes, the candidates agreed that the recently passed large tax overhaul disproportionately benefits the wealthy and derided the tax bill’s provision that capped taxpayer deductions for state and local taxes to $10,000.

Thissen suggested Minnesota adopt a similar approach to California, where, according to National Public Radio, state Senate leader Kevin de Leon proposed taxpayers give to a new state-run charitable fund in exchange for a refund on state income taxes.

Thissen said he supports the state being stable fiscally and balancing the budget without disproportionately affecting the poor.

Candidates touched on a variety of other topics, including immigration, transportation, standardized testing, protecting children, global warming and other subjects during the approximately 90-minute debate. They were given opening and closing statements.

Liebling, who represents the Rochester area in the House, said though Mayo’s largest footprint is in her district, “I don’t represent Mayo Clinic. I represent the people.”

She took issue with nonprofit organizations that she said act like Fortune 500 companies and pledged to “hold their feet to the fire,” if elected governor. Liebling advocated for a single-payer health care system.

Thissen, former state speaker of the House, called it “a serious issue in Albert Lea,” adding though Mayo Clinic does extraordinary work, he believes the hospital system is not as focused on delivering basic health care, instead focusing on making revenue.

He suggested addressing the Destination Medical Center project and said Owatonna, Winona and Albert Lea are seeing their economies suffer because of the funding they have to contribute for the project that benefits Rochester.

Murphy expressed support for the single-payer plan and said she spoke to someone in Cannon Falls who said health care costs him $27,000 per year, and called health care “a right.” 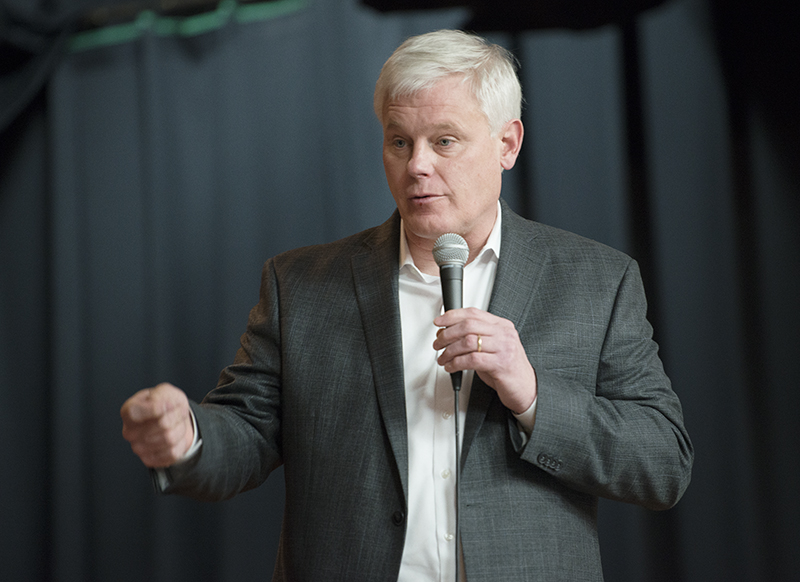 The three candidates discussed their support for Dreamers, a group of nearly 700,000 undocumented immigrants who were brought to the country illegally as children, and they disagreed with President Donald Trump’s decision to rescind the program.

Dreamers, granted legal protection by the administration of former President Barack Obama by the Deferred Action for Childhood Arrivals, is now in limbo as a government shutdown started over the weekend.

“It is our job to protect Minnesotans,” Murphy said. “That is how we will continue to grow the state.”

“They feel as American as any of us,” Liebling said.

Thissen said immigrant classmates of his children were in tears after the 2016 presidential election because of concerns regarding immigration, adding regardless of what happens in Washington, D.C., Minnesota residents need to make Dreamers feel welcome.

The three candidates said there is a need for transit systems to operate in rural areas.

Liebling said she supports raising the gas tax to help fund the plan, with dedicated funding and some local dollars needed.

Liebling advocated for increased transparency so taxpayers can see where their taxes are spent.

Thissen said discussions on transportation need to focus on the people it affects, not on infrastructure, advocating working with volunteers and supporting that with public dollars to ensure the needs of residents are met.

Murphy, a former state representative, said politics divide people from agreeing on a solution, calling the need to address a lack of transportation in rural areas “a real urgency.”

“When people are left isolated in communities, it affects their well-being,” she said. 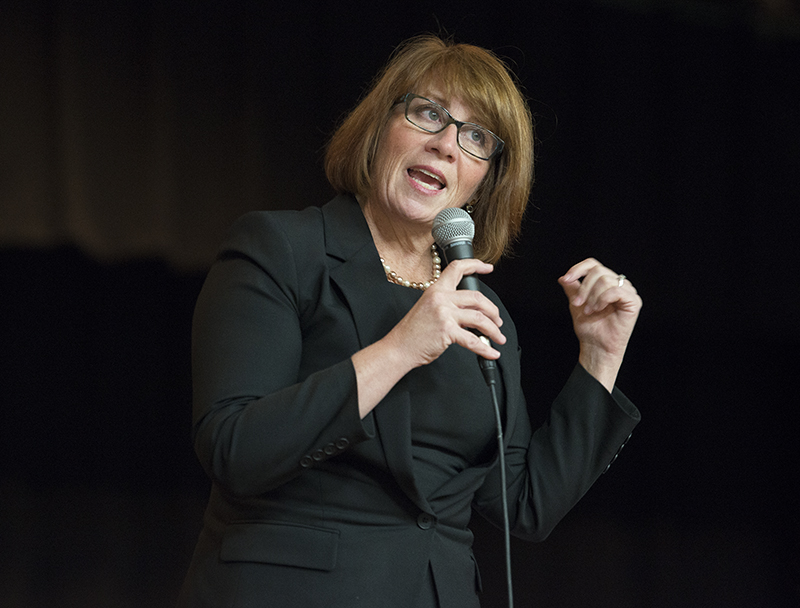 In response to a question about farmers feeling their voices were not heard when the state implemented buffer strip requirements, Thissen said state government needs to understand rural Minnesota has a diversity of perspectives and hear their opinions.

Thissen expressed support for the state empowering local communities to make proper decisions instead of “dictating” from St. Paul.

Liebling said ensuring clean water is available is more important than letting farmers continue to operate in the same way.

“At the end of the day, that water’s gotta be drinkable for people,” she said.

Murphy said farmers felt Dayton blamed them for runoff from agriculture fields polluting Minnesota’s waterways and expressed concern that small farmers were being “snuffed out” by corporate interests.

Allegations of sexual misconduct have dogged entertainers, politicians and other celebrities over the past year. The three candidates were asked how they would empower sexual assault victims.

Murphy said she has worked to prevent sexual misconduct much of her career, adding such incidents on state campuses have not declined and need to be addressed.

Murphy cited the reported backlash from within the party former DFL candidate for House representative Lindsey Port faced after revealing she faced sexual harassment in state politics, adding the party needs to understand it must lead on the issue or future generations will face the same problem.

Liebling called reported sexual misconduct “one of the key issues of our time,” and said it is a good thing survivors are coming forward to share their experiences.

She said not all sexual misconduct allegations are true. Woman should not be shamed for testifying about sexual misconduct, Liebling said, but she cautioned against convicting the accused too quickly or treating sexual assault and inappropriate behavior the same way.

Thissen said survivors need to be listened to and spoke of support for affirmative consent, meaning that someone must say yes — not just say no — before sexual conduct is undertaken.

Men must realize they need to act appropriately, Thissen said. 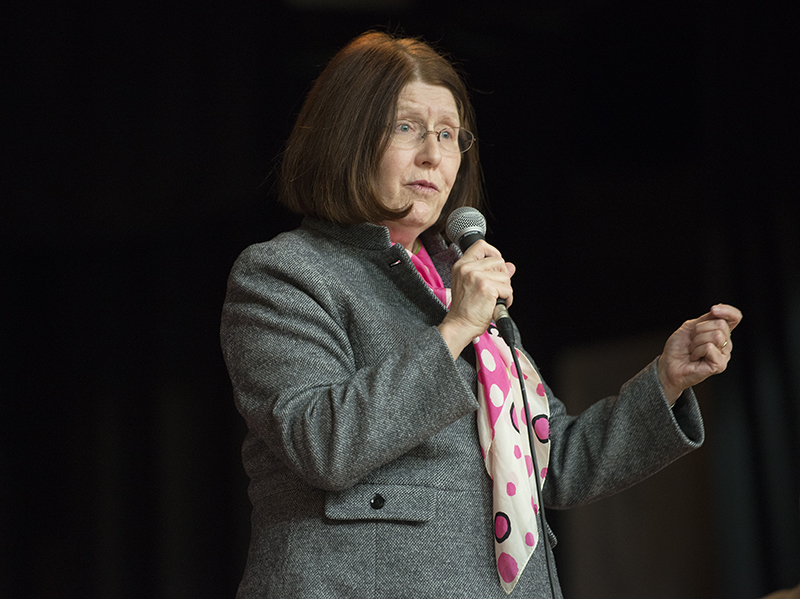 To address college debt, Liebling advocated the state waive tuition costs for two years at its colleges to trim student debt, correlating the rise in student debt to decreases in education funding.

“This is a public good,” she said. “It builds our state.”

Thissen said the state should adopt a system where students pay a certain amount of their income toward college debt for 10 years, with the public picking up the rest of the cost.

Murphy said “it is a sin from my perspective that the federal government is making money off of loans.”

“All three are good candidates, and I would vote for any of them,” she said. “We’ll see what happens after caucus.”

Bregel, co-campaign manager for DFL District 16B House candidate Mindy Kimmel, said the most important issue to her is achieving single-payer health care.

“It’s a right, and I feel like everyone needs to have affordable health care,” she said.

“I found it very hard to pick who to support,” she said.

Hanson said she hopes a strong, progressive candidate will be the next governor.