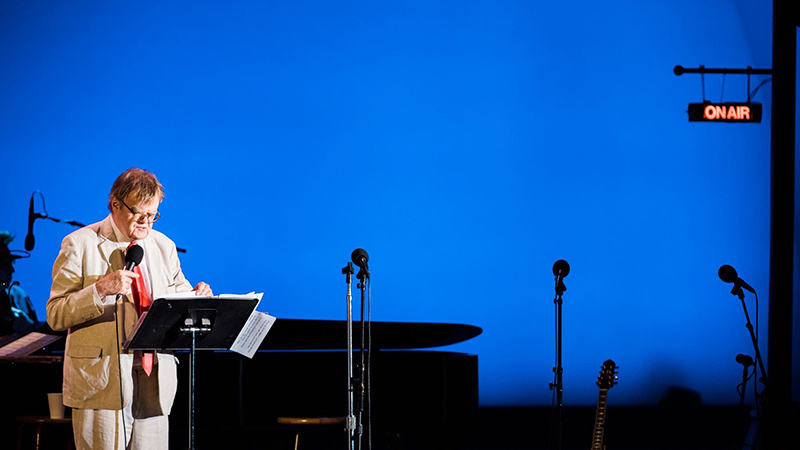 Garrison Keillor delivers the news from Lake Wobegon one last time during his final show as host of “A Prairie Home Companion” at the Hollywood Bowl in Los Angeles July 1, 2016. - Nate Ryan/MPR

In the fall of 2009, Garrison Keillor’s production company mailed a packet of documents to a woman who worked on “A Prairie Home Companion” and with whom he’d been romantically involved.

Inside the envelope was a work contract for that season, a confidentiality agreement and a check for $16,000.

The packet of papers came with a neatly handwritten note, on a pretty card featuring a picture of a bucolic small town.

Kate Gustafson Sanderson, the managing director of Keillor’s company, wrote in the note that the check was “in additional appreciation” of the woman’s contributions to the show:

“It is also given with the understanding that information of a personal and confidential nature regarding the show, Garrison Keillor or others associated with the show, will not be disclosed to any third party without the prior consent of Prairie Home Productions, LLC.”

The message was explicit: The offer of money was contingent upon the woman, who worked for and reported directly to Keillor, agreeing never to talk.

In the decade since, she kept all of the documents in a folder, including the check, which was neatly folded and stored in an envelope.

“I was never tempted to cash that check,” said the woman, who is telling her story on the condition that MPR News not reveal her name, because she fears repercussions. “It felt like a trap, and I’m glad I didn’t.”

In the days following an MPR News investigation into Keillor’s workplace conduct, the creator and host of A Prairie Home Companion has fired back against characterizations of the check and the nondisclosure agreement.

Keillor’s attorney and brother-in-law, Eric Nilsson, told the Pioneer Press on Thursday that the cash offered to the woman was not contingent on her signing the nondisclosure contract. Nilsson said Prairie Home Productions was trying to pay her for terminating her contract, according to the newspaper. Her 2008 contract stipulated that if she was given less than 60 days’ notice, she was entitled to 60 days’ pay, Nilsson said.

But the handwritten note that came with the check disputes that account.

Nilsson also told the Pioneer Press that before the 2008 contract expired, Prairie Home Productions offered the woman another year-long contract at a lower salary. He said as part of the new contract, she was asked to sign a confidentiality agreement, which was required of all new hires.

But the woman was not a new hire. She had been working for Prairie Home for several years. And MPR News has learned that others who worked on that show around the same time were not asked to sign nondisclosure agreements.

Nilsson said the company had not violated the 2008 contract’s 60-day notice period, but still cut her the check for $16,000 “in the spirit of that provision,” according to the Pioneer Press.

The woman called that notion “absurd.”

She said she never received a termination notice in 2009 and doesn’t recall even receiving a contract for the 2008 season, although she was paid for working that year.

She is not the woman whose reported allegations led Minnesota Public Radio to sever ties with Keillor. Nor has she been interviewed by the outside investigators the company hired after the allegations surfaced.

Jon McTaggart, the CEO and president of MPR and its parent company, American Public Media Group, said Tuesday that he decided to sever ties after the company received allegations of “dozens” of sexually inappropriate incidents involving Keillor and a woman who worked for him on Prairie Home.

He said the allegations included requests for sexual contact and descriptions of unwanted touching.

Keillor has said the flirting with that woman was not one-way.

“Whatever flirtation occurred between the complainant and me was mutual, believe me,” he told KARE-TV reporter and host Jana Shortal. He added that “she enjoyed flirtation, as many people do.”

But McTaggart said even if the relationship were consensual, there was no room for it in the workplace, given the power dynamic.

“Our job in the investigation wasn’t to determine whether this activity was consensual or non-consensual, whether it was legal or illegal, whether it was moral or immoral,” he said. “That’s not what an employer does. An employer has to decide whether any of this activity occurred, and if it occurred, was it appropriate in the workplace between someone who has a position of power and a subordinate?”

McTaggart also said on Tuesday that Keillor and two other individuals involved in making the complaints against him had all made monetary demands of MPR. In an email Friday, Linda Keillor Berg sought to clarify that “Garrison asked for money from MPR that was owed him, as part of his contract with the station, and we expect this misinformation to be corrected in your reporting.”

“Outside of that contractual context,” Berg wrote, “Garrison has not yet made any ‘monetary demand’ — even though as a result of publicity regarding MPR’s decision to sever all ties with Garrison, he has lost significant appearance commitments and other compensable opportunities for his work.”

In a statement Friday afternoon, an MPR spokesperson said McTaggart stands by the statement he gave MPR News.