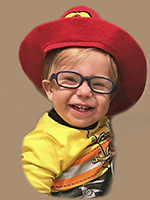 Easton was a sunshine in so many people’s lives. He always had a smile on his face. He loved to play with kids and felt like a big boy trying to keep up with the group. He loved Legos, blocks, balls and cars. Easton loved his mommy’s love and his daddy’s silly games. His sister always played chase, hide-and-go-seek, and played dueling pianos with him, danced and squeezed him up. His big brother always gave him big hugs, giggled and played cars, watched movies together and would share an Xbox controller so Easton felt like he was a part of the game.

Easton’s big brother and sister were his favorite loves. Even though Easton will be missed beyond measure, he is with God in heaven, where his beautiful spirit earned angel wings.