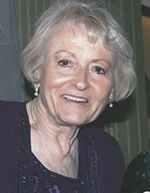 Elaine was born March 14, 1939, to Sherman and Florence (Peterson) Johnson at their home in Albert Lea. She was baptized and confirmed in Trinity Lutheran Church. Elaine attended Albert Lea schools and graduated from high school in 1957. During high school, she played in the orchestra and worked as a carhop at the local A&W drive-in. In her younger days, Elaine was a very athletic and skilled on ice and roller skates. After high school, she worked in Albert Lea for Kroger Egg Co., then Universal Milking Machine Co. until her marriage.

Elaine loved coffee parties, dancing and socializing with her friends. Most of all, she liked to travel to distant places and especially loved the western states. She took several trips with girl friends to California, the Seattle World’s Fair and Hawaii.

In June 1963, Elaine met Tom Jahns of Albert Lea while he was home on leave from the Navy. On Oct. 28, 1966, Elaine married Tom at Trinity Lutheran Church in Albert Lea. During the 51 years of their marriage, they lived in Mankato; New Boston, Texas; Pueblo, Colorado, where daughter, Carole, was born; Glasgow Air Force Base in Montana; and Battle Creek, where son, Mike, was born.

Elaine enjoyed traveling, exploring back roads and experiencing new people, places and things. Elaine loved being a wife, mother and friend to all; cooking and sewing; and hunting garage sale bargains. Holidays were special to Elaine and she loved to celebrate by decorating and cooking for guests.

In 1990, Elaine was diagnosed with Parkinson’s disease. In July 2003, she entered an assisted living facility and moved in December 2009 to Calhoun County Medical Care Facility.

A memorial service will be at 1 p.m., Saturday at Richard A. Henry Funeral Home in Battle Creek with the family receiving friends one hour prior to the service. Cremation has taken place. At a later date, a memorial service will take place in Albert Lea. In lieu of flowers, memorials may be given to Parkinson’s Research, P.O. Box 5014, Hagerstown, MD 21741; or online at www.michaeljfox.org. Condolences may be left for the family at www.henryfuneralhome.org.