An Albert Lea man who reportedly unsuccessfully attempted to steal a utility terrain vehicle from an Albert Lea business was charged with a felony Friday in Freeborn County District Court. 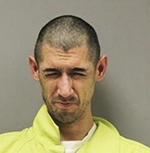 Anthony Alan Madrigal, 38, is charged with felony attempted theft or unauthorized use of a motor vehicle and fleeing a peace officer by a means other than a motor vehicle.

Court documents state Madrigal was charged after an Albert Lea Police Department sergeant drove by the Albert Lea business at about 4:05 a.m. and noticed two people moving from the west gate of the business toward Consul Street. The sergeant reportedly noticed the UTV had been rammed through a gate and became stuck.

The sergeant ran after the males, yelling at them to stop and announcing himself as police. Madrigal was allegedly arrested after he attempted to run into another business that was locked. Madrigal was described in court documents as continuing to resist arrest “and was verbally aggressive with officers.”

The utility terrain vehicle was valued at $18,000.

Judge Ross Leuning released Madrigal on his own recognizance, contingent on him not leaving Minnesota without written court approval, keeping the court/lawyer informed of his address, remaining law abiding, making all future court appearances and signing a waiver of extradition.

Madrigal’s next court appearance is scheduled for Feb. 1.

Attempted theft or unauthorized use of a motor vehicle carries a maximum sentence of more than 1 1/2 years in prison and a $5,000 fine.