Fighting out of Albert Lea 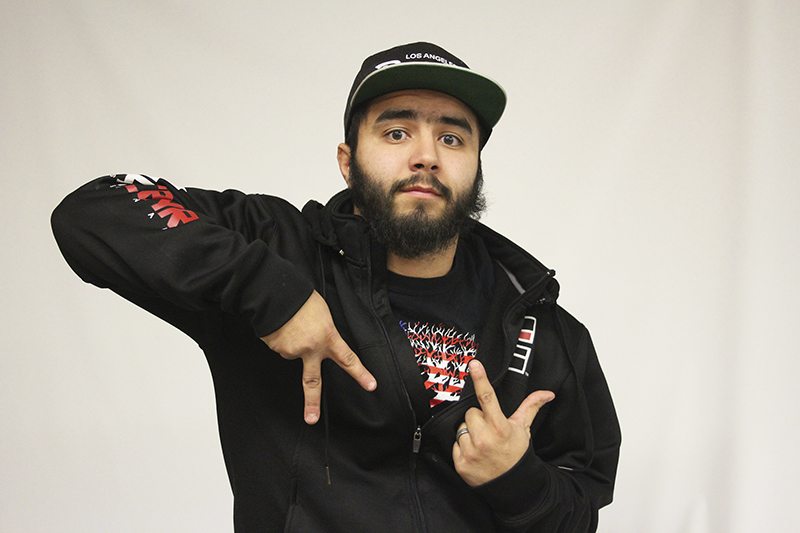 Anthony Yost said whenever he takes photos after weigh-ins for a fight, he “throws up the A-L” to showcase hometown pride. - Sarah Kocher/Albert Lea Tribune

Local cage fighter gears up for professional bout in Hawaii

A local mixed martial arts and cage fighter is hoping his February match in Hawaii will be lucky number four.

After eight years and 23 fights as an amateur, Anthony Yost got his first three professional fights last year. This is his first fight out of the Midwest.

“Eight years as an amateur is kind of a long time,” Yost said.

Yost, now 24, started training when he was 15 and fighting at age 16. He said he was drawn to it because of the discipline. An amateur championship title later, Yost works at Home Solutions during the day and splits his evening time between training and seeing his two children.

“He works really hard,” Yost’s fiancee, Alyssa Wilcox, said. “He goes to work and everyone’s like, ‘You’re so exhausted.’ You know, everyone’s exhausted. We go to work. But nobody else sees he goes to work, he comes home, he gets maybe an hour or two with his kids and then he’s out training for another two hours.”

Yost said the 135-pound Iowa amateur championship title was the turnaround point for him.

“I won the title, and that’s when my life changed,” he said.

This is when he really began to aim toward fighting professionally, Yost said.

“To see him grow from an amateur to a professional is really exciting as a family,” Wilcox said.

But no matter how many fights are under his belt, Yost said the feeling he gets entering the cage is always the same.

“It’s exciting, nervous, I’m scared, all in one,” Yost said. “You know, it’s just a different bundle of emotions.”

He said the atmosphere is “crazy” — that it is filled with boos and cheers and screams. But no matter what, he said he gets a high five and a good job at the end.

“The environment is the best,” Yost said. “It’s the nicest group of people I’ve ever met in my life. The most respectful — where it can be hectic one moment, where you guys are bleeding on each other, and then the next is you guys are sitting there, shaking hands, having a beer with each other. It’s a very, very good group of people is what I like most about it. That, and I get to travel the world starting in February.”

Now, his traveling is largely restricted to the weekends, when he’s headed to either Fort Dodge or Des Moines to train at larger gyms. He’s not alone.

“We’re a pretty active family,” Wilcox said. “We travel with him to his fights and his training, so the kids are around it. It’s kind of a family affair, I guess you could say.”

Wilcox said she also will join Yost at the gym. She has been training in MMA as well. It’s something that brings them together, she said, and it has made Yost more accountable.

That’s because there is a lot of paperwork. Yost has physicals and blood work and neurological exams, each with deadlines he has to meet to stay eligible for fights. Each state has different rules and regulations, too, so he has to make sure he’s up to date on requirements wherever he fights.

“He was kind of a troubled kid, I think, and going through it, I think it made him grow up a little bit,” she said.

Now, Yost is looking for momentum. He was hoping to book five professional fights in 2017 and wrangled three. Yost’s Feb. 17 competitor in Honolulu has already fought 17 professional fights and some big names, Yost said. If he performs well against this fighter, Yost said it could help him along toward his goal: fighting for a professional title.

He’s also hoping to make the transition from hobbyist to full-time fighter: to move to Pensacola, Florida, to a bigger gym with more men his weight class at a higher skill level.

“This fight could really help me do that,” he said.

But no matter where he winds up, Yost said he always plans to walk out to the words, “Fighting out of Albert Lea.”

“This town, they made me,” Yost said. “Through the ups and downs, the schools, everything I’ve done, this town made me who I am. So I’d love to continually support where I’m from.”

In his weigh-in pictures, Yost said he “throws up the A-L” to represent his hometown.

Yost said he is also looking for sponsors in Albert Lea to bring a higher profile to community businesses.

“This is where he grew up and was born and raised, and he doesn’t want to leave that behind,” Wilcox said.

Interesting fact: Yost loves teaching children martial arts and one day wants to be an instructor at his own facility