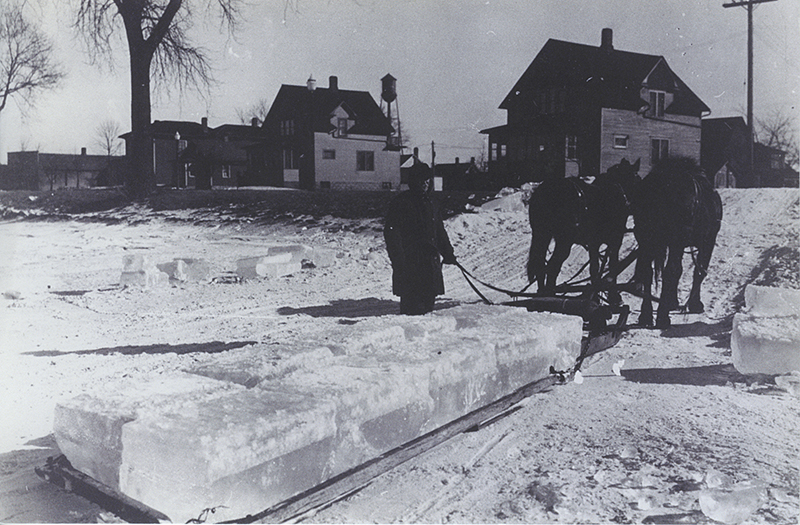 Early ice deliveries, from 1926 to 1929, were made by horse-drawn wagons. - PHOTOS Courtesy of the Freeborn County Historical Society

If someone said they were going to harvest a crop and it wouldn’t be ripe until January, you would have to wonder what that crop was — especially in Minnesota.

The crop was ice from local lakes and rivers. Before modern mechanical refrigeration (freezers and refrigerators), which were introduced in the early 1930s, harvesting ice was necessary to preserve foods and liquids. Throughout history, there were many other methods of preserving foods: drying, curing, salting, smoking, pickling and jelling.  But not all methods were available to everyone or just weren’t usable to the common household or small businesses.

During the 19th and 20th centuries, ice blocks were harvested in the winter to serve purposes in preserving foods and liquids for the growing meat packing industries, brewing companies, bars, restaurants and the common family household for their wooden ice box.

Harvesting ice blocks from lakes and rivers was extremely hard work. Lake ice needed to be at least 10to 12 inches thick for safety purposes. The ice field had to be laid out on the lake using stakes, heavy cords and poles to establish a cutting strategy. Many tools were also used for the lake ice harvest, including saws, gaffs, picks, tongs, walking plows, grappling hooks and pick pools (to name a few).

First, a channel had to be cut in the lake so the ice blocks could be floated to the lake shore, then be pushed onto a conveyor system and finally transported to a large ice storage building. Most blocks weighed 300 to 400 pounds.

Some blocks were also hauled by horse-drawn sleds to various smaller ice storage houses. The year-round storage houses were typically a double-walled structure to minimize melting. Straw and sawdust were spread between the ice block layers to prevent them from sticking together and from melting quickly.

Old-timers said it was typical for a worker to accidentally fall into the lake during the ice harvest. Once rescued, warmed up and dressed in new dry clothes, the worker was back to work within hours.

During the summer, one of the most popular people in town was probably the ice delivery man. Ice was delivered directly to homes and businesses from the ice storage houses by horse-drawn wagons and later by trucks, and was a vital part of local life. Often local children would holler to other children on the block that the ice man was coming down the street, hoping to get a small sample of ice.

Daily ice delivery would usually start about 4 a.m. with 8 to 10 tons of ice. The homes and businesses would display an ice card in the front window indicating if they needed a 25-, 50-, 75- or 100-pound ice block. The ice man would then cut from the large ice blocks in the wagon or truck — with precision —  one of the four choices. He would carry the ice block on his shoulder with an ice tong, hauling the block to the house or business and then depositing it on the top level of the ice box, hoping not drip too much water on the floor in the process.

Albert Lea has a rich history of ice harvesting, which was once called a winter rite. Fountain Lake was a big part of the area’s ice harvesting and was one of its first winter activities. Large amounts of manpower, horsepower, hard work, long hours and ingenuity were needed to harvest the large ice blocks from the lake and then transfer them to the storage houses.

One of Albert Lea’s businesses most identified to the local ice harvests and delivery of the ice blocks was the Albert Lea Ice and Fuel Co., which was owned by Ralph Nelson Sr. and Eddie Olson. The company had ice storage houses at the north end of Broadway Avenue near the location of the old bandshell and on the north shore of Fountain Lake just west of Lakewood Avenue.

Other ice storage houses were located next to Wilson and Co. and on the end of College Street, which served the Rock Island Rail Road. These two locations were strictly for loading ice blocks into railroad “reefer — refrigeration” cars used to transport meat and produce from Albert Lea.

Eddie Olson’s sons, Stuart, Russell and Loring, worked for their dad delivering and selling lake ice blocks for Albert Lea Ice and Fuel Co. At one time, the company had 10 trucks on a six-day delivery schedule for Albert Lea residents. Deliveries were also made out of town to the small area towns and the local county fair.

Early ice deliveries from 1926 to 1929 were made by horse-drawn wagons.  Starting in about 1930, ice deliveries were converted to Ford model “A” trucks.  As the company name states, Albert Lea Ice and Fuel also delivered coal for the winter season or for cooler weather.

Before modern mechanism methods were used for lake ice harvesting, it took up to six weeks to fill the ice storage houses with about 100,000 tons of ice. Eventually, power saws and other transport methods were introduced, reducing the harvest to five days with 50 to 55 men working from dawn to dusk.

The 1950 ice harvest was one of the very last harvests: the end of an era. As with many other ice delivery companies, the Albert Lea Ice and Fuel Co. began to phase out of the ice delivery business in the early 1950s as electric refrigerators, freezers and ice-making equipment were phased into homes and businesses.

It was said that in the early 1950s, the appliance salesman would follow the ice delivery truck directly to the house and then sell them an electric refrigerator.

The word “ice” was dropped from the Albert Lea Ice and Fuel Co. in 1952. The company eventually phased out the coal deliveries and furnace portion of the business, too, as natural gas was phased in for household and business heating. The company then converted the business location into a service station operation on South Broadway, which operated until 1962.