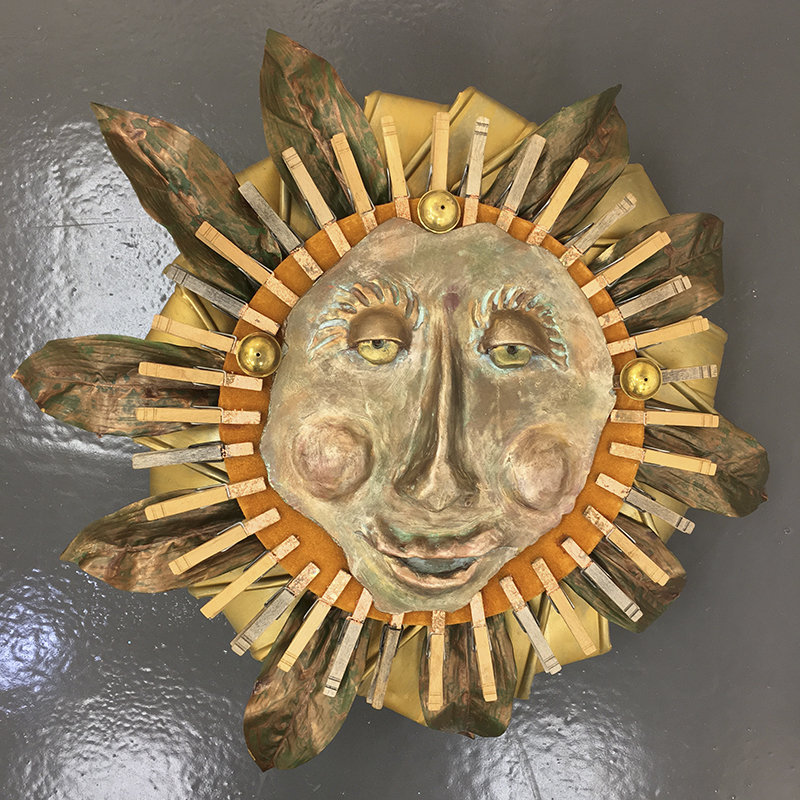 The show includes abstract and literal interpretations of the “Energy” concept and includes “Wind Sun” by Kathy Voorhes. -Provided

The Freeborn County Arts Initiative president is hoping to move conversations about energy to a new forum with the newest exhibition in their space, which opened Jan. 11.

“Energy” features works from approximately a dozen regional artists created in partnership with Invenergy and the Freeborn Wind Farm. It is the second time these organizations have grouped together for an exhibition. Last year’s was a pop-up show centered around wind that extended from one to two weeks after Marin said the event was so successful. This year, the partnership is planned for two months as a full installation.

Through photography, paintings, digital collages and sculpture, Marin said the artists worked to express energy as a concept.

“With the concept being energy, you can get very, very literal interpretations, or more abstract,” he said. Most of the art he sees as more literal.

Artist Marla Klein submitted a piece that features a farmer’s field with a streak of lightning coming down into it in the early morning hours, right before dawn.

“The sky is really dramatic, with a punctuation of energy coming through it,” Klein said. She sees this as both literal and abstract.

Artist Shanda Meyer collected leaves from each of the five trees in her yard as she considered photosynthesis, which morphed into a piece she calls “My Canopy,” which she made with the “Energy” show in mind.

“I need sun, especially during these winter times, to get through the day,” she said.

“The sunrise every morning gives us energy,” Meyer said.

“It’s kind of an interesting question to pose,” Litchfield said. “…What does your energy look like?”

Marin said this is a question southern Minnesotans don’t often have to answer literally because they are often not confronted with the physical sources of energy.

Although it is a partnership with Freeborn Wind Farm, both Marin and Litchfield said the energy theme is not exclusively wind-related.

“I’m really hoping that some of the artists … create artwork that depicts other sources of energy, and I think it’ll be an interesting source of discussion to compare what other people’s (ideas) of energy looks like,” Litchfield said.

He said in doing so, the artwork can “continue the conversation we’re having on an ongoing basis not in this context” — a conversation about the aesthetics of energy.

Marin said the purpose of the Freeborn County Arts Initiative is to be “forward-thinking,” and “Energy” fits in with that vision.

“We do believe strongly that looking at renewable energy solutions is a good way to invest in our community health and wellness,” Marin said.

Marin said he considers energy use a big part of how community actions can affect the larger picture, including personal and emotional energy.

The show’s only agenda, Marin said, is fostering dialogue within the community. According to Marin, this show is an opportunity to do that.

“The show is much larger than our partnership,” Marin said.

The Freeborn County Arts Initiative will host an artist’s reception from 6 to 9 p.m. Feb. 22.