A celebration of life service for Gregory G. Nordstrom, 68, of Huxley, Iowa, formerly of Fairmont and Trimont, will be at 11 a.m. Friday at Immanuel Lutheran Church in Fairmont. The Revs. Wade A. Daul and Adam Carnehl will officiate. Burial will be in Fort Snelling National Cemetery in Minneapolis. 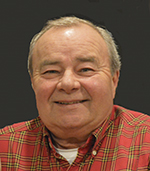 Greg was called to his eternal rest Monday, Jan. 29, 2018, at Mercy Hospital in Des Moines, Iowa. Visitation will be from 5 to 7 p.m. Thursday at Kramer Family Funeral Home in Trimont and one hour prior to the services at the church Friday. Messages of sympathy can be sent online to the family at www.kramerfuneralhome.com.

Gregory Gene Nordstrom was born April 22, 1949, to Eugene and Carolyn (Spiegeler) Nordstrom in Fairmont. He attended school in Trimont and later graduated with the class of 1967. After attending college he enlisted in the United States Navy on Oct. 1, 1968, serving as an aircraft mechanic aboard the USS Constellation until his honorable discharge June 1, 1970. He then moved to Milwaukee, attended IT school and remained working in that area.

On Oct. 16, 1976, he was united in marriage to Linda Nagel at St. Paul’s Lutheran Church in Fairmont. After their marriage they lived in Wisconsin until moving to Albert Lea, where Greg was employed for Scotsman Ice Systems and then for Streater until moving to Fairmont in 2004. Greg then worked in truck part sales until his retirement in 2014. In 2015 they moved to Huxley to be near their first grandchild. Greg’s greatest joy was spending time with his family. He loved baseball and football and was a devoted fan of the Minnesota Twins and Vikings. He also enjoyed doing yardwork, traveling up north and mastering new recipes.

Greg was preceded in death by his father, Gene Nordstrom; sister, Rita Sue Zilka; father-in-law, Milan Nagel; and other relatives.