‘He just had an approach to problems that was fascinating’ 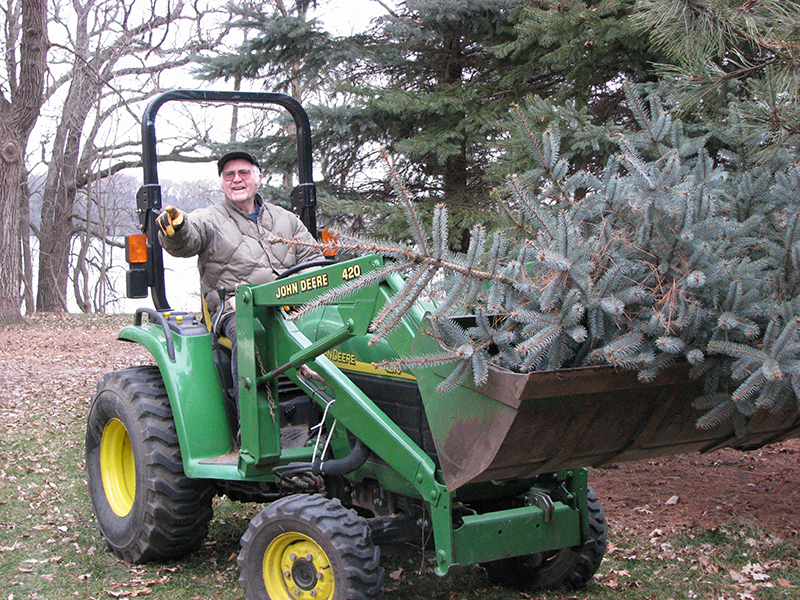 Ken Nelson was an advocate for area lakes and invented a number of different devices. -Provided

Years ago, if you looked out onto a frozen Albert Lea Lake, you may have caught a glimpse of a man and his daughter tightly holding onto a red and white sailboat sail with ice skates on their feet, zooming across the surface.

“He was a loving, kind, generous, intelligent man that did more for Albert Lea than I even know,” Jean Eaton said.

Eaton knew Nelson through the Lakes Foundation. Nelson’s former long-time neighbor, Marlys Webber, said he was a particularly strong advocate for Albert Lea Lake — the same lake where he went ice golfing, a pastime he described in the binder of typed memoirs living at the Freeborn County Historical Library. Nelson and a few friends would chip “holes” into the ice on Albert Lea Lake, near which he had a home with his wife, Vera, for over 60 years. The same man who, when he saw the large predatory bird descending on part of the course, did not resist the urge to call up his friend to say he got an eagle on the fifth hole.

“He had a great sense of humor and his eyes would twinkle, and he was very, very intelligent,” Eaton said.

Some of that intelligence showed in his work with Scotsman, through which Nelson held the patent for the pillow ice machine he created. Nelson worked there for 32 years.

In his memoirs, Nelson said his “most distinguished and exciting role” was fighting patent infringements in federal court. He would assess elements of a competitor’s machine and highlight them for the patent council. He also traveled the country to check on 11 field test machines before their roll-out. One of his machines wound up in the Burger King in Albert Lea. Nelson would check in on it several times a week on his way to work.

His patents would be sold to Scotsman Ice Machines for one dollar, Webber said. Someone from Scotsman approached her about how they could commemorate his work better. Webber built Nelson a plaque with a silver dollar on it.

Nelson also lent a hand to Steve Tuveson, who spent six months working with Nelson on a device he wanted to invent for mounting deer antlers. While they were getting started, Nelson helped the Tuvesons with prototype parts. Now, they’ve sold close to 20,000, Steve Tuveson estimated.

“We’re all taught to not to try to reinvent the wheel, but to accept the wheel,” Tuveson said. “He didn’t necessarily always do that.”

Instead, he would come out of his organized, well-labeled basement workshop with something that would amaze Ronda Tuveson.

“When Steve would come home with stuff, it was like, ‘Kenny made that?’” she said. “‘In his basement?’”

Also out of Nelson’s basement? The nut vice Terry Stumme has held onto. Stumme and Nelson connected when Stumme and his wife were contemplating planting a tree reforestation project on their property.

“Ken served as a mentor for us,” Stumme said.

Stumme and his wife toured Nelson’s own property, on which he had a thriving crop of both deciduous and coniferous trees.

“The man spent most of his time outside in his trees,” Webber said.

Nelson then supervised the Stummes’ two-day planting process in 2000, 19 years after Nelson had planted his own mini forest.

“He was a man who knew a great deal about a large number of topics,” Stumme said. “And one of the things he shared with me, was his favorite thing during his working career was to have somebody tell him he couldn’t do something, and then he would proceed to do it. He would find a way to do it. He was great at seeking out a solution.”

“He just had an approach to problems that was fascinating,” Stumme said.

In addition to the black walnuts, Nelson grew Christmas trees. He also donated trees to the community of Glenville after the 2001 tornado.

“He would never ever take a penny for one of his trees,” Webber said. “You were welcome to have one, but you could not buy one.”

There was an almost-exception to this rule: one year, Nelson let families pick Christmas trees out with the condition that they donate to lake cleanup efforts.

“He provided the Christmas trees for many family Christmases that year, and every penny went to the lakes cleanup,” Webber said.

Every penny, and a few more of Nelson’s brain cells. Webber said when the community knew there needed to be a new dam down on South Shore Drive, Nelson built a prototype in his workshop.

“It was just unbelievable, that a man could go into his own basement and build something like that,” Webber said. “He built it to fit in the back of his PT cruiser so that he could take it and show it.”

He showed it to the Army Corps of Engineers at the headquarters in Rock Island upon invitation. They wanted to keep it, to show others.

Eaton said Nelson was progressive in his view of the community’s lakes.

“He was so visionary with what the lakes could be and how it could be used that I hope for years to come his vision won’t be forgotten,” she said.

There’s another vision: one of a man and his daughter on Albert Lea Lake, holding on to a red and white sail.

In the introduction to his memoir, Nelson put it this way: “I seemed always privileged to live not only a very event-filled, but often lucky, on occasion scary, and quite frequently an exciting and rewarding life.”