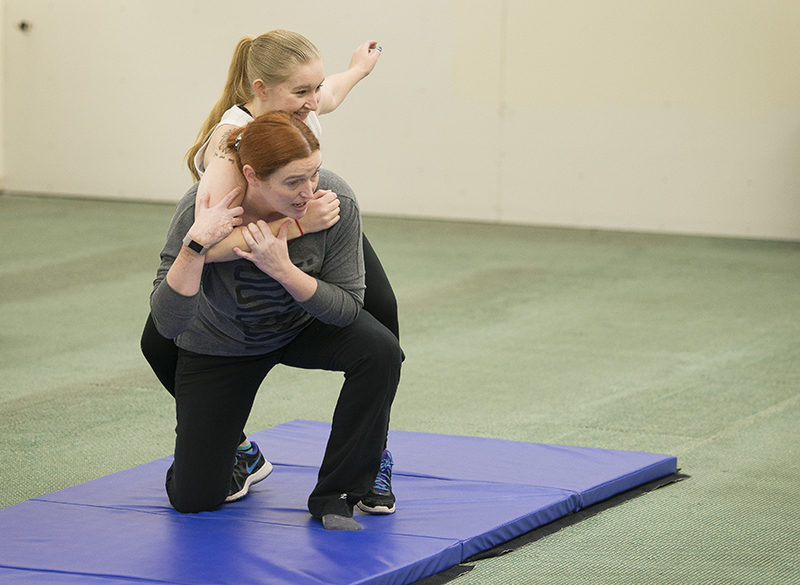 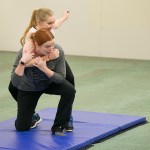 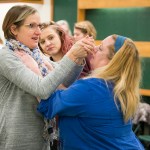 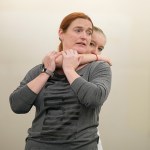 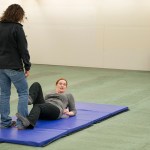 Saturday’s self-defense instructor demonstrates one way to get out of an attack after being forced to the ground while an attacker is still standing. Colleen Harrison/Albert Lea Tribune

According to a University of Minnesota study released in August, this is the typical distance Minnesota buyers travel away from home for commercial sex.

Located at the junction between Interstate 35 and Interstate 90, Albert Lea is easy access, Strength and Dignity Inc. founder Jennifer Lloyd-Benson said. According to a 2014 indicators study with the Department of Justice, analysis of 2004 traffic volume along major interstates

and on and off ramps identified that the volume of daily  traffic exceeded the population of Albert Lea.

“We have learned over the course of these past few years … that prevention is key,” Flatness said.

On Dec. 26, Mayor Vern Rasmussen Jr. proclaimed January Human Trafficking Awareness Month in Albert Lea. This is a nationally recognized month, and Lloyd-Benson and her husband, Russ Benson, have been showing documentaries related to human trafficking for four years.

This year, Strength and Dignity is showing the documentary “I am Jane Doe” on Thursday. The event was originally scheduled for Jan. 11, National Human Trafficking Awareness Day, but was rescheduled due to weather. The movie will be followed by a panel discussion with Flatness, Freeborn County Commissioner Chris Shoff, Country Inn & Suites general manager Heather Lee, regional coordinator for southeast Minnesota Safe Harbor Laura Sutherland and Lloyd-Benson herself.

Benson said he thinks the movie showings have helped increase awareness in the area.

“It impacts people when they see this,” Benson said. After previous events, Benson said attendees asked many questions.

This month, Strength and Dignity also hosts two self-defense classes for women. The first was Saturday in Northbridge Mall. The second is Wednesday at Riverland Community College in Austin.

“We are teamed up with so many different organizations and people,” Benson said. “We’re not in this alone.”

Several churches in the area are tuned in to the work at Strength and Dignity and some help supply care packages for victims of human trafficking that Lloyd-Benson delivers when she receives a call from the jail or the court.

While this is Human Trafficking Awareness Month, Lloyd-Benson said it is year-round work. Flatness said they are working with local hotels and restaurants to educate employees on warning signs of potential trafficking, and that the police department does receive tips from these sources.

But despite this help, Lloyd-Benson said awareness within the community is still a battle.

Nonetheless, Lloyd-Benson said once people learn the red flags, their eyes are opened. Hers were.

“When I first learned about this, I didn’t want to keep silent,” Lloyd-Benson said. “And when it does happen, I don’t want to sit there and think, ‘I should have done something.’”