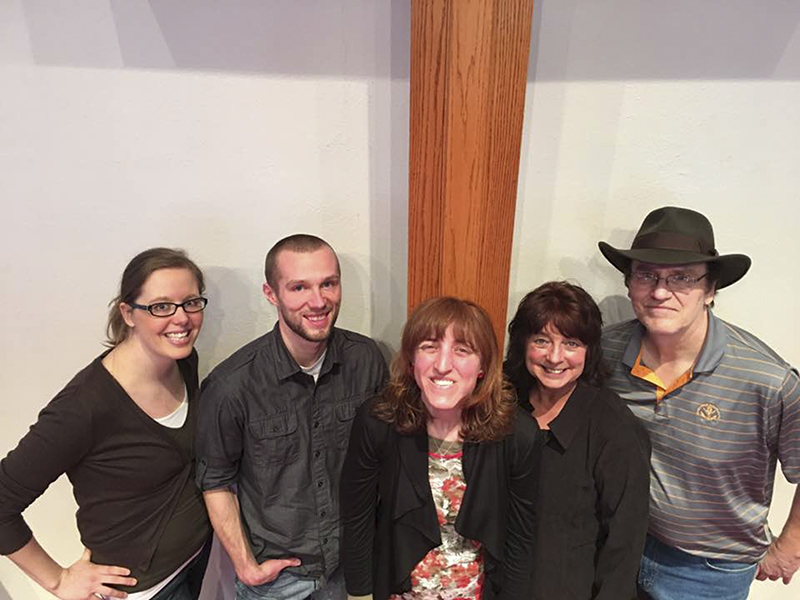 The Angie Kelly Band, including Angie Kelly, center, and her parents Jean and Ron, right, will play contemporary Christian music for the fundraiser. - Provided

Band members and a storyteller have a common goal for their upcoming shared event: entertainment that encourages.

“Just looking at life, we can all agree it’s hard, and yet we can all agree we want to enjoy it,” humorist Tina Haroldson said. “We want to live it to the fullest and we want to influence and impact the people around us in a positive rather than a negative way. And that’s what I do. And we laugh a little along the way.”

Tina Haroldson and the Angie Kelly Band are both performing tonight at the Interchange as part of “An Evening of Christian Music and Comedy,” put on by the Albert Lea Area Christian Events. Group founder Sue Foss said the focus of the event is to fundraise to bring The Tabernacle Experience to Albert Lea.

The Tabernacle Experience is a life-sized, interactive exhibit intending to bring an idea of Christianity’s concept of Israel’s history by creating a Tabernacle of the Wilderness.

“It’s just a good, clean, wholesome evening for couples to come and just enjoy themselves with laughter and music,” Foss said of the fundraiser.

Usually, the group leads worship, but Angie Kelly does write her own music. On the night of the performance, Angie Kelly said the group will be performing contemporary Christian music and one original song, with the hopes the audience will engage with the music in a more worship style than a traditional performance format.

“I would want them to leave with a better and deeper connection with God and Jesus, and also just because of the comedian, just leave them more uplifted,” Angie Kelly said of the band.

Foss said she was introduced to Haroldson when she and a friend went to see her at a KJLY Christian Radio women’s event last spring in Mankato.

“She has really good stories and then she, you know, brings out humor into it,” Foss said. “She had all of us laughing so hard. My ribs were hurting.”

While the acts are performing separately, Foss said she thinks the combination will be a good one.

Haroldson said her performance style is different than that of a stand-up comedian.

“I’m more of a storyteller,” she said. “… I kind of look at ordinary circumstances in life and filter them through hopefully an optimistic lens and then find myself easy to poke fun at. I’m pretty self-deprecating.”

She calls her style “honest and vulnerable.” She tries to make her stories something people can relate to, making light of failures and things that people may have once been embarrassed of but can now look at in a new light. She also weaves in what she sees as lasting truths within Bible stories she sees humor in.

“There are things within the Bible that are incredibly funny, because these are real people,” Haroldson said. Some of the situations described in the Bible can be quite extraordinary, and Haroldson sees parallels in that: Many people now are also ordinary people going through extraordinary things.

“I encourage people to laugh along with me about the fact that life’s a struggle, but we’re all going to get through it together,” she said.

According to Haroldson, the evening will serve as a gathering place for people who want to encourage each other, no matter their faith tradition: to “kind of join hands with people who maybe don’t come from exactly the same place you do, but who maybe are trying to get to the same place.”

She discovered this through her own story and a several defining moments in her 20s, Haroldson said. She was uplifted and encouraged while trying to cope with two unexpected deaths, and humor was a way to do that.

“I’m not sure the psychology behind that, but it all came together, and it all worked,” she said. “And all these years later … I’m pretty much doing the same thing.”

And through this same method, Haroldson hopes the audience can find the evening of storytelling and music working for them, too.

“I can’t think of a soul on earth right now who doesn’t need a little bit of encouragement, and to know that you’re going to come in and no one’s going to subtract from your sense of who you are, but there are going to be plenty of people who want to add to who you are — put a little smile on your face, put a little warmth in your heart and encourage you to take those things home with you,” she said. “At least, that’s my plan.”

Who: The Angie Kelly Band and Tina Haroldson

What: An Evening of Christian Music and Comedy

How much: $15, available at Hy-Vee, Trumble’s and the Albert Lea Convention and Visitor’s Bureau. For more information, call 320-5756.