Keillor pushes back on investigation; says one accuser ‘enjoyed flirtation’ 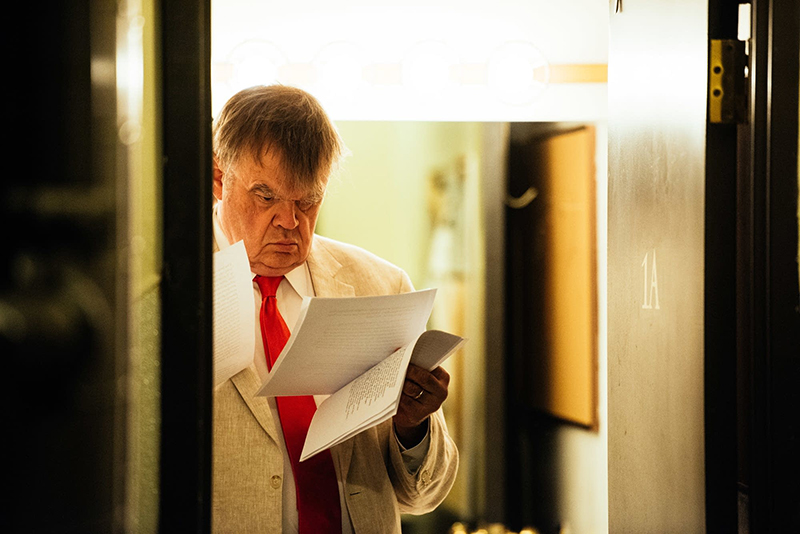 Garrison Keillor reads through scripts backstage at Fitzgerald Theater just before walking out to begin the performance for A Prairie Home Companion on Feb. 27, 2016, in St. Paul. - Nate Ryan/MPR

Two days after an MPR News investigation detailed years of alleged mistreatment, sexualization and belittling of some women who worked for Garrison Keillor, the popular host blasted MPR leadership and said one victim “enjoyed the flirtation.”

“If I am guilty of harassment, then every employee who stole a pencil is guilty of embezzlement,” Keillor said in a statement to MPR News.

He also shot back at a woman who accused Keillor of “dozens of sexually inappropriate incidents … over a period of years,” according to a letter from MPR CEO Jon McTaggart sent on Tuesday to listeners and members.

McTaggart’s letter came after repeated requests for interviews by MPR News reporters who interviewed more than 60 people who either worked for or crossed professional paths with the 75-year-old former host of Prairie Home Companion. MPR — the parent company of MPR News, which is separate from the rest of the company by an editorial firewall — severed business ties with Keillor, who also created The Writer’s Almanac, in November. The investigation outlined in detail the workplace atmosphere that left several women who worked for Keillor feeling mistreated, sexualized or belittled.

Keillor declined requests for interviews. But on Wednesday, in an email to KARE 11 reporter and host Jana Shortal, Keillor said “the allegations are untrue … whatever flirtation occurred between the complainant and me was mutual, believe me.” He added that “she enjoyed flirtation, as many people do.”

On Nov. 29, 2017, Minnesota Public Radio announced it was severing its business ties with Garrison Keillor, creator of A Prairie Home Companion and The Writer’s Almanac. The company had cited alleged “inappropriate behavior” with a female colleague as its reason.

In case you missed the MPR News investigation, here’s a quick recap of the major findings:

• Keillor, creator and longtime host of A Prairie Home Companion, had affairs with at least two subordinates in the last decade. In one case, his production company sent the woman involved a check for $16,000, along with a confidentiality agreement and a new work contract. The woman did not cash the check and signed neither the agreement nor the contract.

• Keillor could be warm and supportive to his coworkers, but he could also be withering in his criticism. Two different women who worked with him on The Writer’s Almanac, a short daily show about literature, described Keillor as a boss who would take evident relish in crumpling up their work and stuffing it into a wastebasket. One of those women says she was fired under pretense of a reorganization and then replaced by a younger woman. She sued MPR in 1999, and her suit was resolved before trial.

• As the proprietor of a bookstore adjacent to the campus of Macalester College and as a temporary, unpaid faculty member at the University of Minnesota, Keillor crossed boundaries with young women. At the bookstore, he wrote an off-color limerick that suggested a certain female employee could “make a petrified phallus stir.” At the university, when a young woman suggested that he give her an internship, he agreed — but added that he would have to suppress his “intense attraction” to her.

Since the story, Keillor, as well as MPR president and CEO Jon McTaggart, have responded to the report to MPR News and elsewhere.

• After weeks of declining to elaborate on his reasons for severing ties with Keillor’s companies, MPR president and CEO Jon McTaggart sat for an interview with MPR News. He also sent a message to listeners and members. In both he disclosed that a woman who had worked for A Prairie Home Companion had filed a list of complaints against Keillor, alleging that he had made “requests for sexual contact and explicit descriptions of sexual communication and touching.”

• McTaggart flatly rejected the suggestion that he had been influenced by an extortion scheme. (Keillor had asserted in emails to MPR News that an employee had been fired and denied the generous severance he asked for, and had then sought out a colleague to allege inappropriate behavior. “This is an extortion scheme and McTaggart gave in to it,” Keillor wrote. “It’s just about that simple.”) “Speaking specifically to blackmail or extortion,” McTaggart declared in the interview, “that was absolutely not any part of this. We’ve made decisions based on the facts we discovered.”

• And, speaking of money: McTaggart said that Keillor, as well as the woman who filed the complaints against him and the former employee who had brought Keillor’s behavior to MPR’s attention, had all asked for some. “I will say that we have received a monetary demand from Garrison,” McTaggart said. “We’ve received a monetary demand from the woman who has been referred to in these things, and from the former employee. I’ll also say that we have not paid anyone anything in any settlements. We have not. We’ve not settled with anyone. So I don’t know what could be meant by extortion or blackmail but that was not in any way part of this.”

• McTaggart said he only recently learned of a 1999 lawsuit in which a former MPR producer who worked for Keillor sued the company claiming age and sex discrimination. McTaggart, who started working for MPR in 1982, said he wasn’t aware of the lawsuit when it was filed, nor did his predecessor and founding president Bill Kling ever pass along that information. “The truth is, I did not know about it. I was not told about it. I was not involved in it and learned about it only as a part of the investigation with these allegations,” he said. “It was not conveyed to me. I can’t explain whether it should have been why it wasn’t. I can say that it wasn’t. I did not know about it.”

• In a Facebook post on Wednesday, Keillor once again mentioned his recent burst of productivity as a writer, and revealed that he has been sober for more than a decade:

“This big wave of productivity is sort of amazing to me. My brain is aging but something up there wants to make the most of these last years. Maybe the fact of Last Years is the stimulus. It also helps to be married to the one you delight to be with. But here I am with four books in progress, two screenplays, and a big urge to resume a weekly column. I went through long dry periods back in my 40s and 50s and now this. All I can say is, Praise God and thanks to Peet’s dark roast coffee. And thank God for that day twelve years ago on a ship to Alaska when I, once and for all, put alcohol aside. The crucial story about [Prairie Home Companion] that no journalist will ever write is the sheer volume of writing that went into it. There is no newspaper that knows how to report hard work.”

• Late Wednesday, Keillor sent MPR News this statement via his publicist. It is quoted here in full:

“Jon McTaggart’s letter was in response to a blizzard of listener anger, all of it richly deserved, after MPR expunged shows that people loved. And listeners smelled a rat. Listeners know me far better than MPR management does and they know I’m not abusive. Management, when it heard a complaint back in October, did not have the good manners to call me, a part of MPR for fifty years, and sit down with me face-to-face and talk about what had happened. If they had done that simple courteous thing, this all would’ve been avoided. Instead, they have been duplicitous from first to last, starting with how they began their Potemkin” investigation” up until the very moment when they issued a letter in the midst of mediation where we had agreed to not to make any public comments.

How to respond to so many untruths in a short space? The woman who complained was a friend, had been hired as a free-lance researcher, an employee of mine, not MPR’s, working a job that she did from home by email. I hardly ever saw her in the office. Our friendship – which was mutual, reciprocal and respectful — continued in frequent emails about our kids and travel and family things that continued to my last show and beyond. She signed her emails “I love you” and she asked if her daughter could be hired to work here, and so forth. She still features “A Prairie Home Companion” prominently on her Facebook page.

Her complaint was drawn up by her attorney, a highly selective and imaginative piece of work. MPR depended on the complaint, it never spoke to the complainant.

If I am guilty of harassment, then every employee who stole a pencil is guilty of embezzlement. I’m an honest fiction writer and I will tell this story in a novel.

I’m a writer and I have better things to do than fight with a committee of faceless people who are in a panic. And I’m glad not to have any connection with an organization that operates like that.”