In northern Minnesota born and raised, near Lake Superior she spent her early days. Chilling out maxing, relaxing all cool. Spinning some flags outside of her school.  When a guy in a van, always up to no good, started cruising around in her neighborhood.  She took one little look and hopped right in and that is how her future life begins. 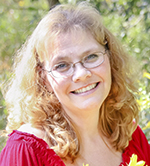 Heaven is a little brighter today. Kelli passed away Sunday, Jan. 28, 2018, in her home — peacefully and serenely after a four-year fight against esophageal cancer. She was a valiant, humble, stubborn, but, most obviously — a beautiful soul. Everyone who met her liked or loved her immediately.

She was born in Duluth, the city she loved and yearned to return to as often as she could. She graduated from Richfield High School, where she met her future husband. She continued her education at Normandale Community College when her future husband asked for her hand in marriage. Proving she was a little insane, she agreed. She wed her high school sweetheart and joined him in Kansas while he finished a hitch in the Army. They returned to Minnesota to be back with family and friends and start their lives together. She blessed him with four daughters who are currently growing up to be the best of them both: Aurora, Karenna, Lorelei and Josie.

Kelli, ever ready for an adventure, again followed her husband from the Twin Cities to the would-be-perfect hamlet of Hollandale. There she would dive into the rural life with zest. She helped found a new mothers group and raised some chickens and goats. Vegetable and flower beds soon followed. She was always active with the girls’ education, band, cheerleading, fundraising — you name it.

She eventually found herself as the local postal clerk. She fell in love with this role as if born to it. When her position was phased out, the Hollandalers wrote more than 200 letters to try to get them to keep her. Next she found herself working at Wedgewood Cove as part of the office staff, another position she loved.

She didn’t want a funeral or to ever be the cause of anyone’s sorrow. Her family will be spreading her ashes among her favorite places, as she requested. Family and friends will gather to celebrate her life in July.