Funeral services for Larry D. King will be at 10:30 a.m. Monday at First Lutheran Church in Albert Lea. The Revs. John Holt and Daphne Hamborg will officiate. Visitation will take place from 3 to 5 p.m. Sunday at Bonnerup Funeral Service in Albert Lea, as well as one hour prior to the service at the church. Interment will be at Graceland Cemetery. Military honors will be provided by the local service organizations. 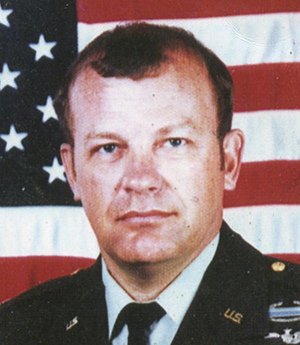 Larry Dale King was born on July 16, 1943, in Albert Lea to Franklin and Deloris (Peal) King.  He graduated from Albert Lea High School in 1961. Larry enlisted in the United States Navy for three years, where he was an aviation mechanic. Larry then enlisted in the Army, where he would spend 21 more years of his life fighting for his country. Through his 24 years of military service, Larry became a skilled, accomplished and decorated soldier. He was a member of the Green Berets, serving as a ranger,  pathfinder,  helicopter pilot, fixed wing pilot and had his own Halo team. He later went on teach other special forces unit soldiers.  For his dedicated service, he received included a Silver Star with an oak leaf cluster, Bronze Star with an oak leaf cluster, Army Commendation Medal, Distinguished Flying Cross, and Air Medal with 37 oak leaf clusters, and two Purple Hearts.

An excerpt from a past article in the local paper: “Warrant Officer Larry D. King, son of Mr. and Mrs. Franklin G. King recently received a direct commission to second lieutenant and was awarded his second Silver Star, the nation’s third highest award for valorous duty, following his heroic actions in Vietnam. King received over 50 medals and awards for his service in Vietnam, where he was a helicopter pilot.”

After that article, he would continue his military career, where he would retire as a captain in the U.S. Army. During his service, he obtained his master’s degree in procurement from Webster University. After his retirement from the military, he would use that degree while he worked for Raytheon as a procurement agent, where he would be sent all over the world. He also taught ethics at the college level.

Larry married the love of his life, Jane (Hesson), in Dayton, Tennessee.  The couple split their time living in Chattanooga, Tennessee, and Albert Lea.

Larry enjoyed fishing, biking and skiing.  When Larry was home, you could most always find him tinkering in his garage or spending time with his beloved dog, Teddy. Larry was blessed to have lifelong friends from grade school. In the last few years, he did all he could to get this group of friends together to go fishing or just to spend time together.  Larry can be described as loving, loyal and fearless.  He liked to tell stories — how much of it was actually true nobody’s sure – but nonetheless, his family loved listening to all of the stories he had to tell. Overall, Larry loved his life and he loved the people that shared it with him.

Larry is preceded in death by parents Franklin and Deloris; a brother in infancy; and brother- and sisters-in-law, Ronald Sorenson, Rosemary King and Beverly King.