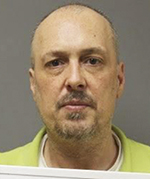 Court documents state Morarend was charged after officers responded at approximately 6:30 a.m. Friday to a report of a suspicious person and possible burglary in Freeborn County.

Dresser doors in a bedroom were all partially opened, and the homeowner said she did not leave them that way.

Officers reportedly followed footprints from the house toward Minnesota Highway 13, finding an undershirt next to the tracks.

Court documents state the officers were led to a residence and were given permission by the homeowner to go inside.

Morarend was allegedly found in the basement of the residence behind a bedsheet hanging from steps, sitting next to a washing machine.

Tennis shoes behind the washing machine had matched the prints in the snow.

Assistant Freeborn County Attorney Karen Sackis Lunn requested Judge Ross Leuning follow recommendations set by the bail study and set conditional bail for Morarend at $30,000, noting Morarend has failed to appear for court appearances before, has been deemed a predatory offender and was found hiding in a home.

Morarend requested he be released on his own recognizance and said he was in the basement of his friend’s house and was entering treatment prior to his arrest, taking issue with the charge.

“The offense itself just does not make sense,” he said.