Memorial services for Linda Marie Herman of Albert Lea will be at noon Saturday at Bonnerup Funeral Service in Albert Lea. Visitation will be from 10 a.m. until the time of service at the funeral home. The Rev. Kent Otterman will officiate. 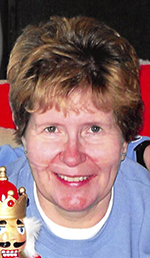 She was 71. She was born Jan. 2, 1947, in Albert Lea, the daughter of Delvin and Dorothy (Hemry) Johnson. She was a graduate of Albert Lea High School and Albert Lea Vo Tech. Linda worked for over 20 years at Woodvale in Albert Lea and for several years with Crest Services.

Linda was united in marriage to William Herman. She loved dogs and cats and her pet blackbird, Squawky, and enjoyed collecting angels and stuffed animals. Together they loved going to the county and state fair and, in good weather, riding around town on their scooters.

She was preceded in death by her parents and husband, William.

Memorials are preferred in lieu of flowers.