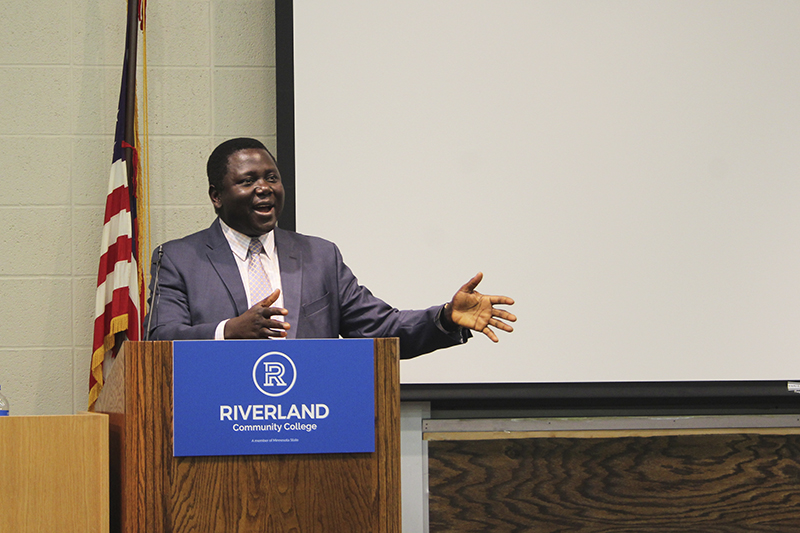 Director of Business Services at Riverland College George Bass spoke about what he sees as true diversity within the country Monday night. Sarah Kocher/Albert Lea Tribune

Dr. Martin Luther King Jr.’s words and actions were the grounding point of presentations Monday night at the 30th annual community celebration of the civil rights activist, whose assassination was 50 years ago.

“We gather here tonight to commemorate a man who lived in more tumultuous times than our own,” Freeborn County Commissioner Chris Shoff said during the event at Riverland Community College. 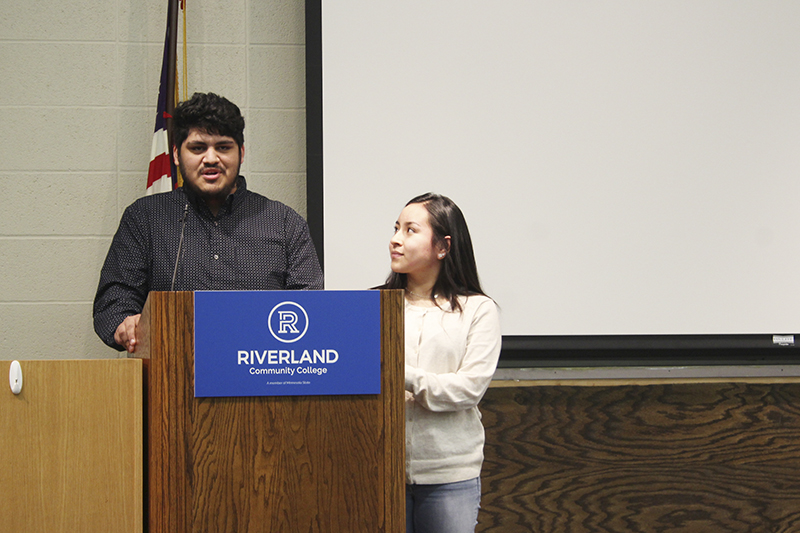 Students Jonathan Sandoval and Yudith Balbuena speak about their connection to DACA and their identity as Dreamers. Sarah Kocher/Albert Lea Tribune

Shoff said the Minnesota state demographer indicated population growth in this area is likely to come from people out of Africa and Asia.

“Whatever those countries might be called by others, those are the countries where our population growth will occur,” Shoff said.

Linda Lares, who has been part of the event committee since its inception 30 years ago, said this year’s focus on immigration was an expression of Dr. Martin Luther King Jr.’s fight against injustice.

De Rosas took her turn at the podium to thank her parents.

“No one has done more for me than my lovely parents, who crossed the desert for me so I could walk this stage,” she said through tears. “… I too, like Martin Luther King, am a dreamer.”

“I don’t know what my future would have been in Mexico, but I know my future here is about to start,” Sandoval said.

Keynote speaker Sara Karki, a staff attorney at the Immigrant Law Center of Minnesota, spoke to the approximately 120 people in attendance about the United States’ current immigration system.

“Right now in the current environment, all types of immigration are under attack,” Karki said.

Karki said the three most popular types of immigration into the United States are through family, through employment and through asylum. According to Karki, more than half of the undocumented residents in the United States came legally and have overstayed their legal time frame.

Keynote speaker and Director of Business Services for Riverland College George Bass said the community has a responsibility to live out its principles of diversity by establishing an infrastructure that allows for success for minorities, immigrants and the poor.

“It’s one thing to talk about diversity,” Bass said. “It’s another to make sure it has meaning.”

Bass called for government to be more representative of diversity. For Bass, this meant ensuring everyone — despite race, nationality or wealth — has equal access to what is necessary to become productive members of society.

“Ladies and gentlemen, if we don’t follow these exact principles, I think we will be failing what Luther King actually set us to do in the first place,” Bass said.

Attendees Jan and Dewey Birkhofer said the event was heartening.

“Hopefully events like this can make the public aware of where we need to be headed,” Dewey Birkhofer said.

This coming together and this awareness, Lares said, is the point of 30 years of a Martin Luther King Jr. event.

“We’re a wonderful strong community, but it’s like anything else,” she said. “When you don’t do something for a while, you kind of fall into ruts. So this way, it always reminds us: We have our community that we want and what it looks like, but we have to work towards it. And this is a visual and an event that reminds us of those challenges that as a community, we face together.”