An Iowa man who was reportedly driving drunk during a two-vehicle crash that injured an Albert Lea man Saturday morning was charged Monday in Freeborn County District Court. 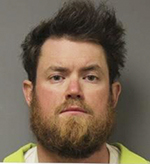 Court documents state two Albert Lea police officers were dispatched to a vehicle crash at approximately 5:30 a.m. at the intersection of Myers Road and U.S. Highway 65. Upon arriving, they reportedly observed a Chevy Impala in the east ditch of the road with heavy damage to its passenger side.

The driver of the vehicle, Randy J. Bremer, 61, of Albert Lea was taken to Mayo Clinic Health System in Albert Lea with chest and knee pain.

Bremer advised he traveled north on Highway 65 to Myers Road, and a vehicle came across Highway 65 without its headlights on, striking the side of his vehicle.

Court documents state Schulte was standing next to the Impala, and his vehicle was in the west ditch of Highway 65.

Schulte allegedly smelled of alcohol and admitted drinking a couple beers a few hours earlier, showing impairment during testing. A preliminary breath test reportedly showed he was more than twice the legal limit. At the time of the crash, he did not have valid insurance on his vehicle.