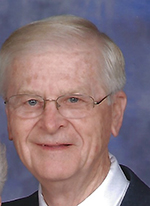 He was born Dec. 17, 1935, in Albert Lea to Elliott and Iva (Clementson) Hall. Ron graduated from Emmons High School, where he was a three-sport athlete and academic all-star. He attended Mankato State University and was a graduate of Cornell University.

Ronald served in the U.S. Marines for four years. He was a high school teacher and basketball coach in Clinton, and also taught at Central Junior High School in Rochester for four years. He later went on to teach earth science, astronomy and math for Rochester Community College until retiring in 1998.

Ron was a member of Gloria Dei Lutheran Church in Rochester and a member of the Elks Lodge. He enjoyed spending time with his family and liked the outdoors, hiking, fishing and golfing. He was an avid Minnesota Vikings, Twins and Gophers fan.

He was preceded in death by his parents and sister, Elinor Johnson.

Funeral services will be at 10:30 a.m. Monday at Gloria Dei Lutheran Church in Rochester. Visitation will be from 2 to 4 p.m. Sunday at Ranfranz and Vine Funeral Home in Rochester and will continue one hour prior to the service at the church. Memorials may be designated to the Wounded Warrior Project.

To share a special memory or condolence, visit www.ranfranzandvinefh.com.