Saying goodbye to a community landmark 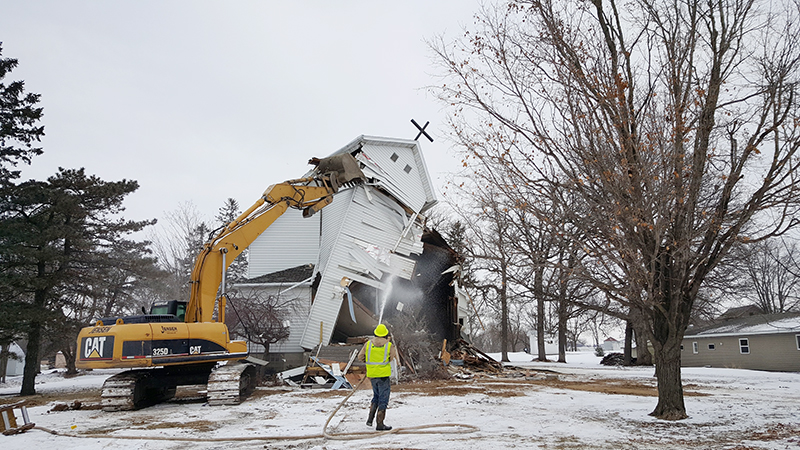 A backhoe with Jensen Excavating demolishes the former St. James Catholic Church building in Twin Lakes on Tuesday. Crews were out at the site most of the day tearing down the building and taking away debris. - Provided

TWIN LAKES — Bundled up in coats and hats and huddled together, a group of nine parishioners of the former St. James Catholic Church bowed their heads Tuesday morning as the Rev. Kurt Farrell led them in prayer.

Standing behind and to the side of Farrell, who leads the congregation at St. Theodore Catholic Church in Albert Lea, were three men from Jensen Excavating — and next to them sat a backhoe. 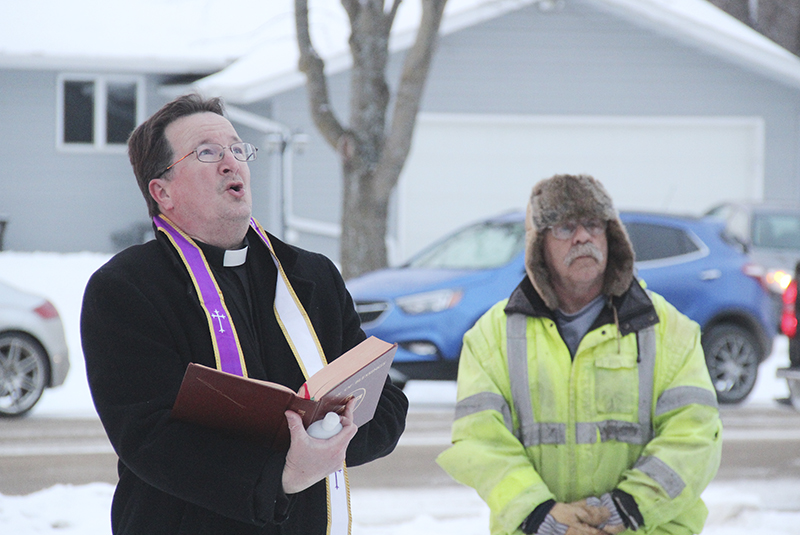 The Rev. Kurt Farrell looks up at the cross on the top of the St. James Catholic Church building Tuesday morning as he blessed the church, the land and the excavators prior to crews from Jensen Excavating demolishing the building. – Sarah Stultz/Albert Lea Tribune

One of the parishioners, Imogene Attig, said when the church contracted with Jensen Excavating to demolish the Twin Lakes landmark, the company’s vice president, Jamie Jensen, contacted Farrell.

“He was very nervous about taking it down because he’s never demolished a church before,” Attig said. “He called Father to say prayers and bless everybody and the equipment because he wanted to make sure everything was OK with the big man upstairs.”

After the church closed its doors June 29, 2017, church members had to decide what to do with the property. 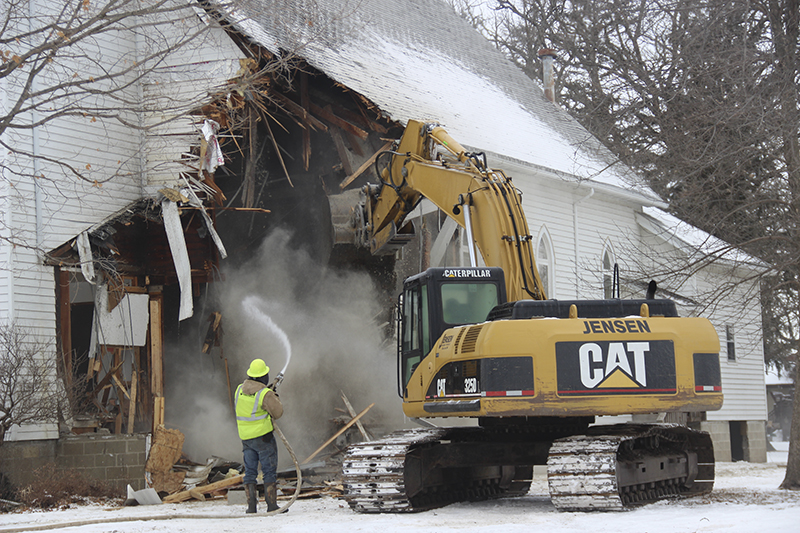 A crew member with Jensen Excavating sprays water as another directs a backhoe during the start of demolition of the former St. James Catholic Church Tuesday in Twin Lakes. – Sarah Stultz/Albert Lea Tribune

“Either we were going to have to walk away and let it deteriorate, or take it down, which we thought was more respectful,” Attig said.

She said if the church was still open and having services, the church members would have fixed some of the problems with the old building, including the roof. However, with the St. James congregation dissolving and parishioners now attending congregations in other locations such as Albert Lea, Round Prairie and Lake Mills, she noted it didn’t make sense to keep the building.

The church and the land it sits on were valued at $21,800, she said, according to an assessment from the Freeborn County Assessor’s Office. Of that value, the land was assessed at $13,100, and the church itself at $7,700.

They hope to sell the land once the demolition is complete. 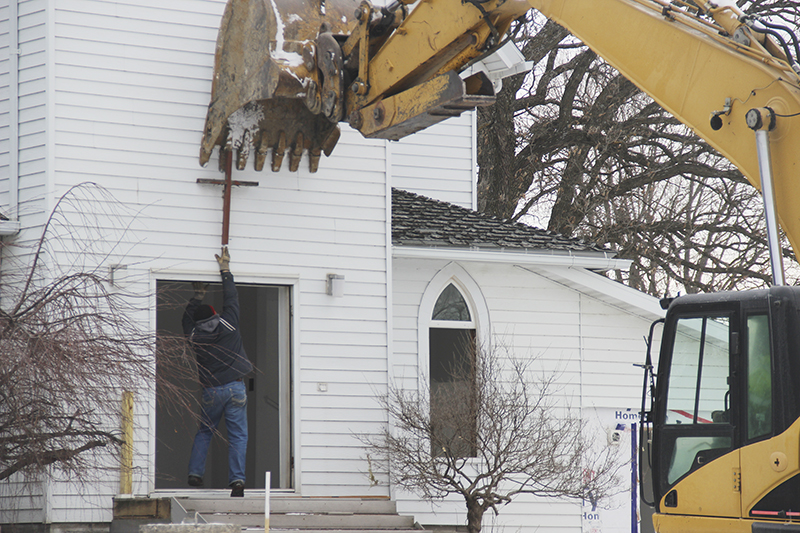 Jamie Jensen of Jensen Excavating reaches up to grab a cross from the front of the St. James Catholic Church as a backhoe tries to pry it off. – Sarah Stultz/Albert Lea Tribune

In 1886, the Rev. James Fleming purchased the land where the present church stands, and James Donnely was hired as contractor for the new church. During the church’s construction and completion in 1887, the Rev. James Donovan became pastor and served the parish for 46 years.

In honor of these men, the church was dedicated to St. James, according to a history of the church.

In March 1950, fire destroyed the original church, and a wooden structure built in 1891 by Pickerel Lake Concordia Lutheran Church was purchased for $1,000 and moved to Twin Lakes. 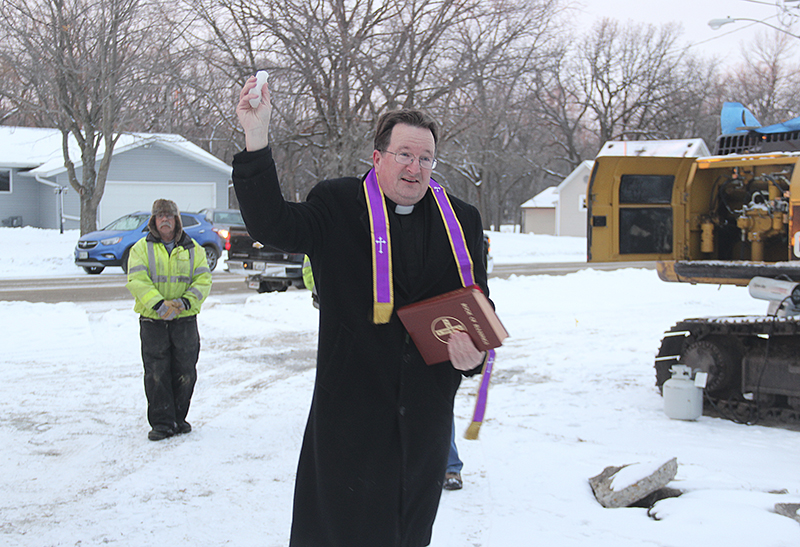 In 1980, the church had extensive damage when lighting struck its steeple.

Although the church had its share of struggles related to damage from the fire and lightning strike over the years, the parishioners had nothing but fond memories of their time spent there.

Janice Stensrude said she has attended the church almost her entire life. She was born in February 1967 and started attending with her family in September that same year.

Attig said she had attended St. Theodore Catholic Church for about seven years, when she moved near Twin Lakes in September 1981 and started attending St. James.

“We started coming here, and they put their arms around you,” she said. 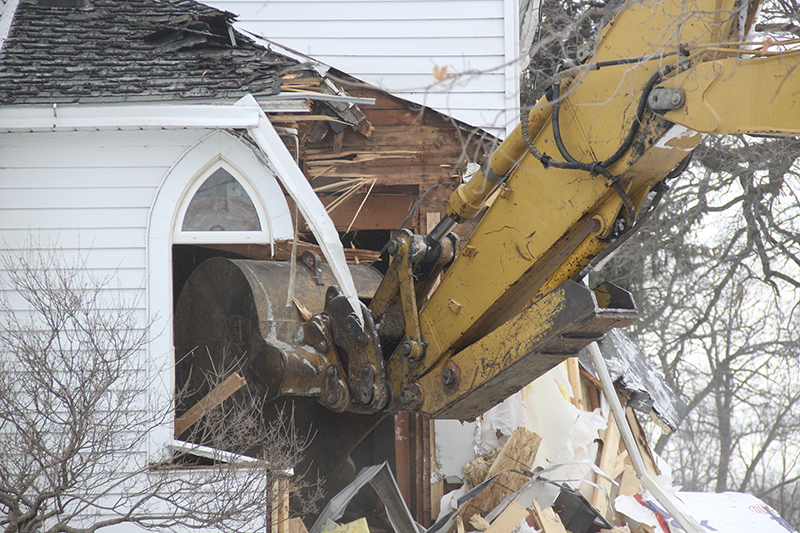 The women recalled opportunities they had to serve the community on a monthly basis, fall festivals, Christmas pageants, church picnics, a party where they invited people from other area churches to attend and a program for seniors, among others.

The discussion about what to do with the church began about two years ago because of a shortage of young men going into the priesthood. Between Albert Lea and the Twin Lakes Catholic churches, the priests had to oversee four different Mass times, Stensrude said. The Diocese felt there was too heavy of a load on the priests, and limited it to three Mass times.

The last Mass at St. James Catholic Church was led by the Rev. Russell Scepaniak. 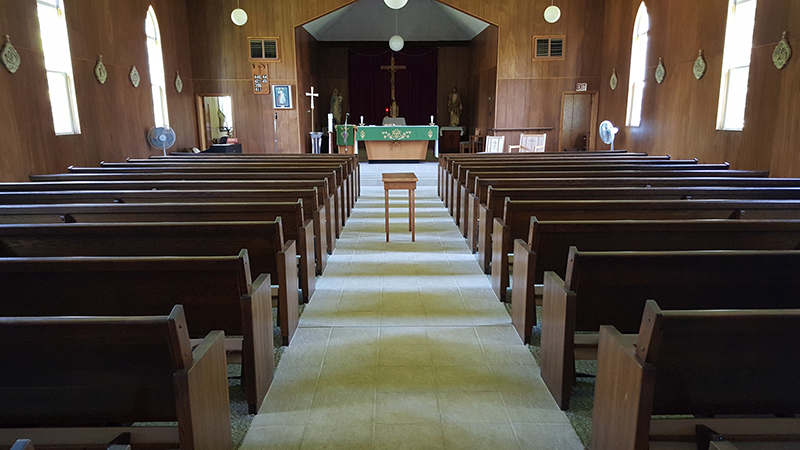 The inside of St. James Catholic Church before it was demolished. – Provided

Attig said she and others have felt sad for a long time knowing the demolition was coming, but they still believe it was the right thing to do.

Prior to the demolition, the church hosted a sale of some of the things inside the building, and some of the items were given to a Polish museum in Winona. All money from the church sale and any additional proceeds from the sale of the land will go to support the church’s cemetery, which is southeast of the church a few miles.

Attig said parishioners hope to put a marker on the corner recognizing the land is where the church once stood.

She thanked Jensen Excavating, which was completing the demolition at cost, and Richard Stadheim, who donated the fill.

Crews worked to bring down the building into the early evening Tuesday, Attig said.

St. Theodore Catholic Church in Albert Lea is the only remaining Catholic church in Freeborn County. 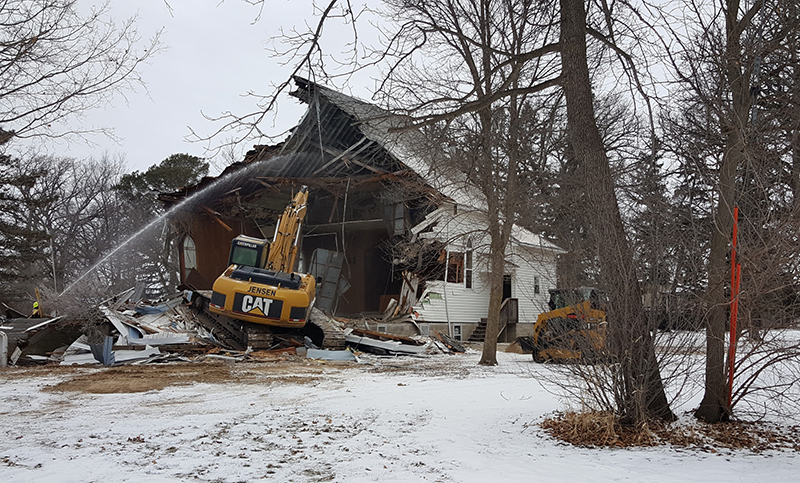 At least half of the former St. James Catholic Church building was demolished at the time this photo was taken Tuesday morning. – Provided