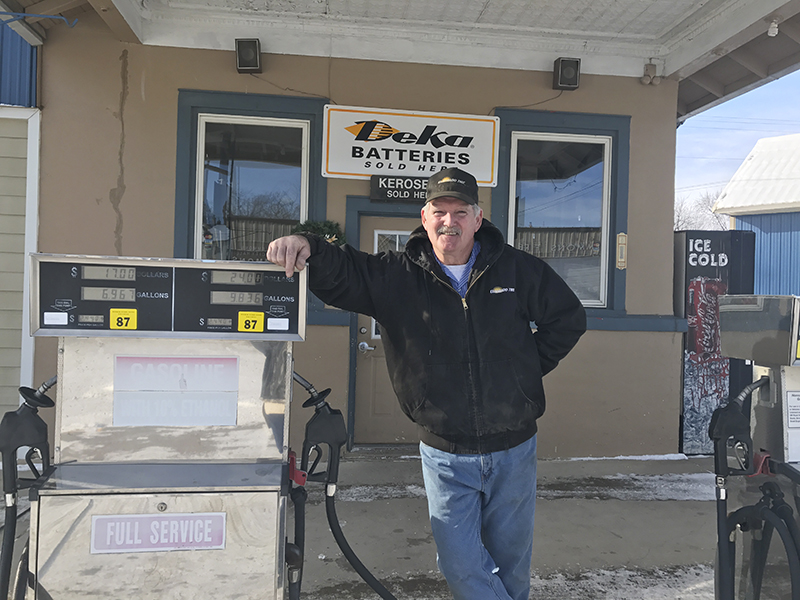 EMMONS — While telephone booths and drive-in movie theaters have become a thing of the past, there are a few full-service gas stations that still offer personalized service to their customers. Among them is Lair’s 66 in Emmons.

In the years that have followed, Lair has, in many respects, been a one-man show. While his wife helps with the business and he has some part-time help on occasion, most of the time it’s Lair himself who will brave the blistering cold of winter or the scorching heat of summer so customers can comfortably sit in their vehicles while he fills their tank.

Born and raised in Emmons, Lair knows most of his customers well.

“I got a bunch of good customers that I really enjoy,” Lair said, noting they are the best part of the job.

Lair also does light mechanical work and tire replacement at his shop.

As part of his full-service station, he’ll check tires and oil if asked and can replace batteries and air filters. His station offers unleaded, diesel and kerosene, as well.

With him frequently being the only staff member available, he encourages those who need more than just a fill up to call in advance.

As far as future plans, Lair plans on providing the same services as long as he can, but is hopeful someone may want to take over so he can scale back a bit as he inches towards retirement.

In the meantime, Lair can be found at Lair’s 66, which is open from 7 a.m. to 6 p.m. Monday through Friday, 7:30 a.m. to 2 p.m. Saturday and 8 a.m. to noon Sunday; volunteering on the Emmons Fire Department or working with the Emmons Commercial Club to promote the town of Emmons.