Funeral services for Shirley Elaine Kallberg, 87, will be at 11 a.m. Friday at Trinity Lutheran Church of Albert Lea. The Rev. Eileen Woyen will officiate. Visitation will be from 4 to 7 p.m. Thursday at Bonnerup Funeral Service and one hour prior to the service at the church. Interment will be at a later date. 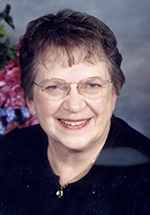 Shirley was 87. Shirley was born July 18, 1930, in Chicago to Arthur and Elizabeth (Larsen) Meyers. She graduated from Albert Lea High School in 1948 and was in the National Honor Society and the Quill & Scroll Society.

Shirley worked for Meighen, Knutson and Sturtz Law Office; Page and Hill Homes and then served as parish and administrative secretary for Trinity Lutheran Church in Albert Lea from 1968 to 2005, when she retired. She was an active member of Trinity Lutheran Church and was active in choir, TLCW, Mary Circle and the Altar Guild, being the directress for many years. Shirley was a member of D.O.E.S. Her favorite pastimes were bird watching and playing bingo with her friends at St. John’s Lutheran Community.

Shirley was preceded in death by her parents Arthur and Elizabeth Meyers; brother, Robert Meyers; and daughter-in-law, Debbie Olson.

In lieu of flowers, donations to Trinity Lutheran Church are appreciated.