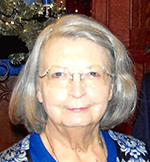 Sylvia died Monday, Jan. 1, 2018 at St Marys Hospital in Rochester surrounded by her loving family. She was 75.

Sylvia was born July 17, 1942, in rural Manchester, the daughter of Kenneth and Elsie (Thofson) Enderson. She graduated from Albert Lea High School in 1960. On Dec. 8, 1962, she was united in marriage to LuVern Thrond at Grace Lutheran Church in Albert Lea. Sylvia worked as a service representative at Security State Bank in Ladysmith, Wisconsin, and as a telephone operator both in Minneapolis and Albert Lea.

Sylvia was baptized and confirmed at West Freeborn Lutheran Church and had been an active member of Mount Mariah Lutheran Church in Byron before transferring her membership back to West Freeborn on her 55th wedding anniversary. She enjoyed decorating the family home and pampering her many pets, but the love of her life was the time spent with her family — especially her grandchildren.

Sylvia was preceded in death by her parents and niece, Delores Radcliff.