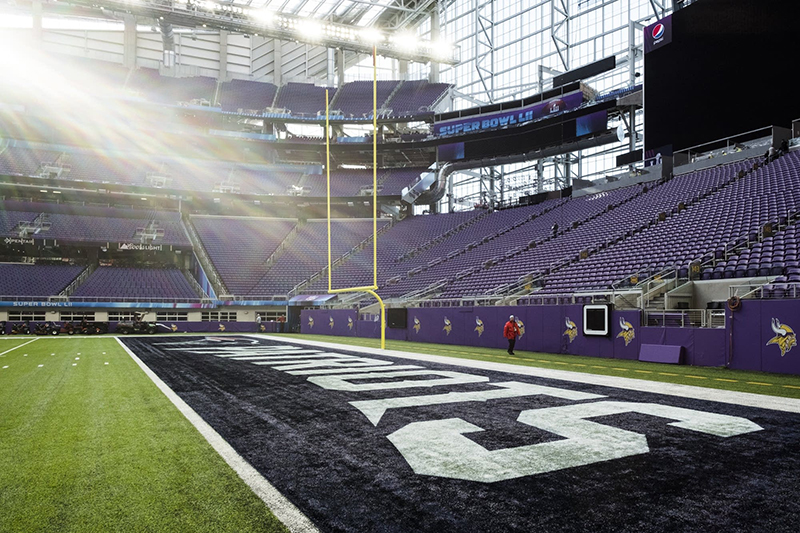 The New England Patriots logo is lit up by the sun inside U.S. Bank Stadium. - Evan Frost/MPR news

The first change in U.S. Bank Stadium that any Vikings fan — especially one still smarting from Sunday’s loss — would notice are the end zones.

“The Norseman is out and we put in the blanks and then we do all the artwork for the teams,” NFL field director Ed Mangan said.

That would be artwork for the Patriots and the Eagles.

In fact, the Vikings logo will mostly be scrubbed from the stadium over the next several days. Super Bowl LII logos will be put over team insignias that surround the field, as well as throughout the stands.

Inside the downtown Minneapolis stadium, hundreds of workers are setting up huge lighting trusses and rigs that will hang above Justin Timberlake’s halftime show, putting up risers for NBC’s commentators and changing the seating.

Eric Finkelstein, senior director of event operations for the NFL, said the league started work in Minneapolis just after the first of the year, even when it wasn’t clear when they could start on the stadium because the Vikings had a postseason. NFL officials had in mind what they needed to do well before the stadium opened in July 2016.

“When we first started coming here and talking through the different elements, (we were) trying to figure out how best to lay everything out and make it work properly for the Super Bowl,” Finkelstein said.

There will be more booths for play-by-play announcers from all over the world. One section of seats in the upper deck is being converted to an auxiliary press area. The Vikings store will become a Super Bowl store. And outside there will be a security checkpoint to screen ticket-holders located 300 feet from the doors. That’s about 200 feet farther than where regular season attendees check in.

This is Finkelstein’s 19th Super Bowl setup. He said it’s different than any other he’s done.

“It’s the most urban setting of any NFL stadium in the league. So you have to work around all of those factors and elements in order to try and make it work,” Finkelstein said. “In many years we have large parking lots that are surrounding the building so it gives us plenty of work space. Here it’s not possible, but that’s OK, we’re able to be creative and find other ways to work around that and make all of that work.”

The workarounds have led to some road closures and restrictions already in effect downtown, and in public areas like Nicollet Mall being used for Super Bowl events.