Wayne B. Thompson, 80, of Faribault passed away Sunday, Jan. 7, 2018, at Three Links Care Center in Northfield.

Funeral services will be at 10 a.m. Friday at Parker Kohl Funeral Home, 1725 Lyndale Ave. N in Faribault. The Rev. Henry Doyle will officiate. Interment will be at St. Lawrence Cemetery in Faribault with military honors provided by the Rice County Central Veterans Association. Visitation will be at the funeral home from 4 to 7 p.m. Thursday and on Friday for one hour prior to the services. To honor Wayne’s passion for Minnesota sports, all are welcome to wear their favorite team gear. 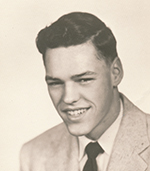 Wayne Burdette was born on July 10, 1937, in Albert Lea, to Melvin and Geraldine (Robinson) Thompson. He graduated from Albert Lea High School in 1955. Wayne married his high school sweetheart, Rose Kirsch, on Aug. 8, 1964, at St. Theodore Catholic Church in Albert Lea. Wayne served in the U.S. Air Force for 20 years. He and Rose raised their family and traveled to many destinations through his military service, including New Jersey; Wiesbaden, Germany; Colorado; Michigan; and Tampa, Florida, before he retired from the military.

Wayne graduated from Faribault Vo-Tech with a degree in small engine repair. He worked for Faribault Rental for about 15 years, then with Four Seasons Small Engine Repair. He purchased the business and operated the repair shop for 22 years until he suffered a stroke, leading to his retirement. Wayne enjoyed fishing, woodworking, hunting, crosswords and working out with his buddies at Therapyworks/Anytime Fitness. Wayne also loved watching his favorite Minnesota sports teams — the Twins, Wild and Vikings. He was a member of the National Rifle Association, North American Hunting Club, Disabled American Veterans and the Veterans of Foreign Wars.