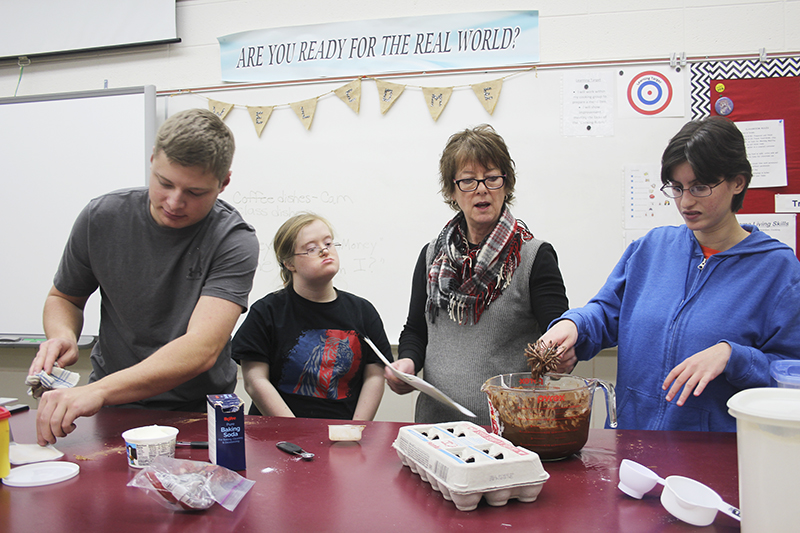 Transitions program students Cameron Schultz, Sarah Thompson and Anita Maloney finish up their chocolatey batter as the oven heats up. Lori Nelson said she has been incorporating baking and cooking into lessons since she began teaching 40 years ago because she sees them as important life skills. Sarah Kocher/Albert Lea Tribune

If you walked into her Emmons classroom in the ’90s, you may have seen something unexpected: a special education teacher taking trimmers to her students’ hair.

Lori Nelson estimated she gave about 30 haircuts during her time teaching. She would get a note of permission from the students’ parents.

“A priority for me was to always build up their confidence,” Nelson said. 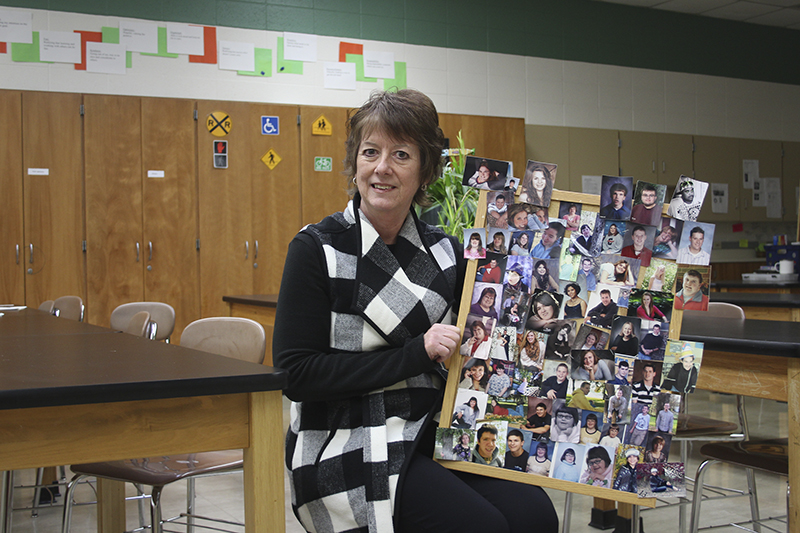 Lori Nelson keeps two picture boards of former students in her classroom at Brookside. She said hearing about how her students are doing after they move on is one of her favorite things about teaching. Sarah Kocher/Albert Lea Tribune

“You know, it doesn’t take much just to get a good picture, but you know, it’s something that you need,” Nelson said.

At the end of this school year, Nelson will retire after 40 years of teaching, largely in the special education field. Nelson is currently running the 18-21 transitions program at Brookside Education Center, where she works with students with disabilities on increasing their independence by building functional and vocational skills.

“I knew all along I wanted to teach special education,” Nelson said.

When she was young, she had an obsession with the story of Helen Keller, she said. Now, there’s a quote about Keller printed out on white copy paper and tacked to the soft fabric bulletin board above her desk at Brookside. It says, “If Helen Keller’s teacher had believed that her learning was hopeless, Helen’s potential would have remained dormant.”

It’s from a book by Tom Cody that Nelson read as part of a teacher’s group last year.

In her classroom now, Nelson’s students are frequently measuring out flour and sugar for recipes they work on together. Nelson said some of her students are able to take these recipes home and cook for themselves or their families.

She has been introducing cooking into the classroom for years.

“Even from the beginning, like my very first job in Iowa, I always thought cooking was important to bring to the classroom because it’s such an important life skill,” Nelson said.

She said she used her own budget to buy ingredients when she taught her math students about fractions using quesadillas.

Although cooking in the classroom is still featured after 40 years, Nelson said education as a whole has changed since she started teaching.

“Things have really changed through the years,” Nelson said. 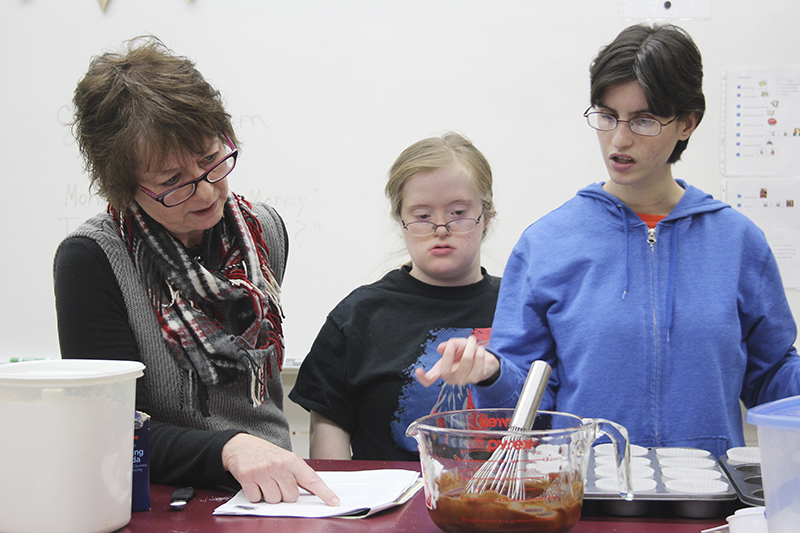 She has also watched as special education has gone through cycles of focal areas. When she was writing her master’s thesis, she wrote it on attention-deficit/hyperactivity disorder because two of her own children were diagnosed with it. Now, Nelson said, awareness is growing around autism.

She has not only seen changes in education, but also in herself. She notices it in the same form she said she is working to grow in those she teaches: confidence.

“I have a lot of experiences,” Nelson said. “I have my experiences with different students, different family dynamics, different schools, that I think are much more beneficial than a college degree.”

Nelson is using that experience while mentoring a first-year teacher through a Minnesota Department of Education program.

“I have been fortunate to have her supporting me,” Lyle teacher Molly Noterman said through email. “She acknowledges struggles I have as a first-year teacher and offers possible solutions.”

This includes a list of suggestions for modifying classroom materials after Noterman needed ideas.

“Her assistance has already had such a positive impact on my career,” she said.

After four decades in education, Nelson is beginning to see the generations come through: her students might be children of former students. Nelson said one of her favorite things is to run into people she has taught before.

“I really enjoy seeing past students because I may think they’ve forgotten me, but they haven’t,” she said. “And I haven’t forgotten them.”

Nelson said she has stayed in the education field because she sees the ways her work impacts her students.

“I can see the value in what I’m doing,” she said.

Nonetheless, the haircuts may end here.

“I think it’s going to be hard to retire … because it’s part of who I am,” Nelson said.

30 – Haircuts Nelson estimates she has given her students