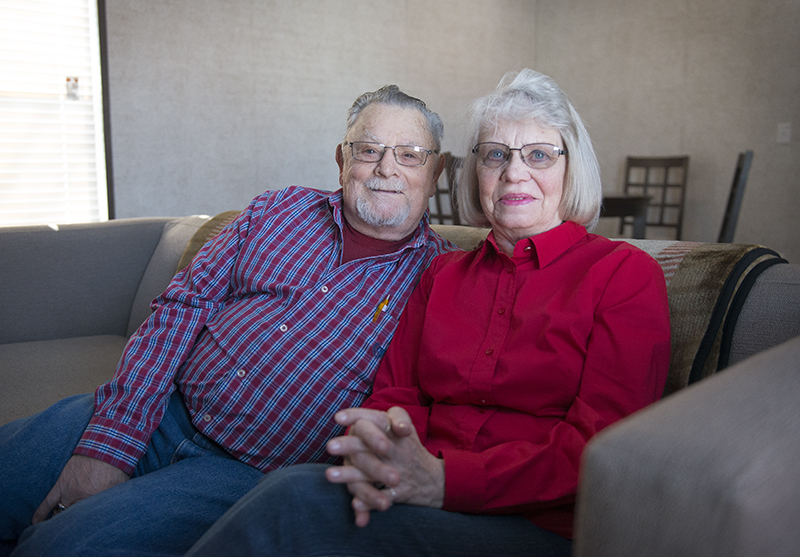 Don and Mary DeSart lost their home to a fire in October. The fire also injured their two sons. - Colleen Harrison/Albert Lea Tribune

Albert Lea family recovers from fire thanks to community support

On Oct. 26, a fire destroyed the home of Don and Mary DeSart, a place where they lived for more than 50 years, injuring their two sons, Dean and Dave DeSart.

Since the house was destroyed in the fire, local businesses and individuals have ensured their family will be able to recover.

A benefit Feb. 3 for the family at the Eagles Club raised more than $7,000, which is expected to help the couple as they hope to build a new home at 502 E. Fifth St., on the footprint of the family’s previous home.

“It was really unbelievable, the amount of people we saw,” Don DeSart said.

The event included a bake sale, bean bag and pool tournaments and live music. More than 200 hamburgers are estimated to have been served from about 1 p.m. to 5:30 p.m.

The family has received cards and donations from businesses, friends and family. Quilts, lawn ornaments and other items have been given.

“It’s unreal,” Don DeSart said. “People from all over — people we don’t even know came up to us at the (benefit) … you can’t believe it.”

Dean DeSart, who was pulled from the house by Albert Lea police, was reportedly unconscious and taken to Mayo Clinic Health System in Albert Lea. He was flown to the Twin Cities, where he stayed for six days at Hennepin County Medical Center. David DeSart was taken to the hospital by police, where he was treated and released.

David DeSart was in an upstairs bedroom when the fire alarm went off. He remembered grabbing for the bedroom door.

David DeSart recalled heading downstairs to try to find his brother before realizing his life was in danger and leaving the house. He began gesturing to passersby to call 911, and police crews soon arrived and removed his unconscious brother from the residence.

“It was the most traumatic thing I have ever been through in my life,” David DeSart said.

“Everybody should have one of those doggone things,” Don DeSart said. “They definitely saved our boys.”

“We could have came home to two funerals very easily. Probably another 15 minutes and it would have been two funerals.”

Despite the fire completely destroying their home, Donald and Mary DeSart said they are thankful the damage was not worse.

“Sure, it’s bad luck, but we still have our sons,” Mary DeSart said.

The couple also credits a higher being for the fire not resulting in any deaths.

“There’s somebody up there watching over us, because the neighbor boy was coming home from uptown and he called 911,” Mary DeSart said.

Don, Mary, David and Dean DeSart now live in a different location as they try to build the new home.

David DeSart said adults who grew up with him in the Fifth Street area attended the benefit.

“It was surreal to see them guys,” he said. “To see them again, even though we’ve lived separate lives, they still think of Fifth Street, our area, the south side, and that meant so much, it really did.