Funeral services for Barbara Jean Geesman, 84, of Albert Lea, will be at 4 p.m. Thursday at Redeemer Lutheran Church in Alden. The Revs. Todd Walsh and Greg Ofsdahl will officiate. Burial will be in Alden Cemetery. Visitation will be from 3 to 4 p.m. prior to the service at the church. 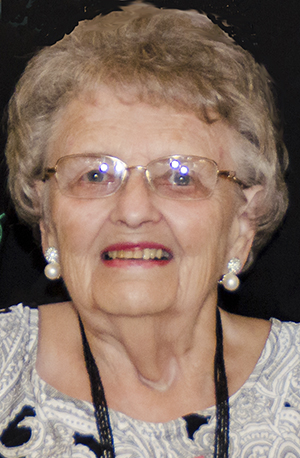 She was born on Dec. 3, 1933, the only child of Ray and Agnes (Tufte) Hanson. She loved to tell the story of how she was born at her aunt and uncle’s farm near Hayward, during a snowstorm. She arrived early and only weighed 4 pounds. They wrapped her up in blankets and laid her in a shoebox.

She was baptized on Jan. 24, 1934, and confirmed on May 4, 1947, at Hayward Lutheran Church in Hayward. She graduated from Albert Lea High School in 1951. After graduation she worked at First Bank in Albert Lea.

Barb married Bill Geesman on Dec. 14, 1952. She was a housewife and farmed alongside her husband for many years. Barb was a very caring, loving and devoted wife and mother. She especially loved being a grandmother and was so proud of her three grandchildren.

She was a member of United Methodist Church in Alden, United Methodist Women and the Naeve Hospital Auxiliary. She enjoyed volunteering, traveling, playing cards, doing crossword puzzles and watching old movies and musicals. Barb was very lucky. Anytime she entered a drawing, she usually won. She also enjoyed cooking, baking and entertaining. Family always looked forward to delicious Thanksgiving dinners at the Geesman home and they especially enjoyed her knack for making the best stuffing.

Barb is preceded in death by her husband in 2002; her parents; father- and mother-in-law Guy and Delia Geesman; sisters-in-law Doris Hinkley and Cleone Hunnicutt-Svenningsen; and brother-in-laws Floyd Hinkley, James Hunnicutt and Harvey (Hop) Svenningsen.