Memorial services for Beverly L. Bera of Albert Lea will be at 2 p.m. Sunday at the Bonnerup Funeral Service chapel. The Rev. Henry Doyle will officiate. Friends may greet the family one hour prior to the service Sunday. 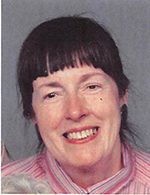 Beverly was born March 26, 1924, in St Paul, the daughter of Samuel and Rhoda (Reeder) Kirkpatrick. She graduated from Albert Lea College and from business school in Chillicothe, Missouri. Beverly was united in marriage to Lewis Bera, who preceded her in death. She was a member of Christ Episcopal Church in Albert Lea.

Bev was a homemaker, staying at home to care for her family, and worked part-time for a few years at Holiday Inn in Albert Lea. She also volunteered at Naeve Hospital in Albert Lea.

She was preceded in death by her parents and husband, Lewis.