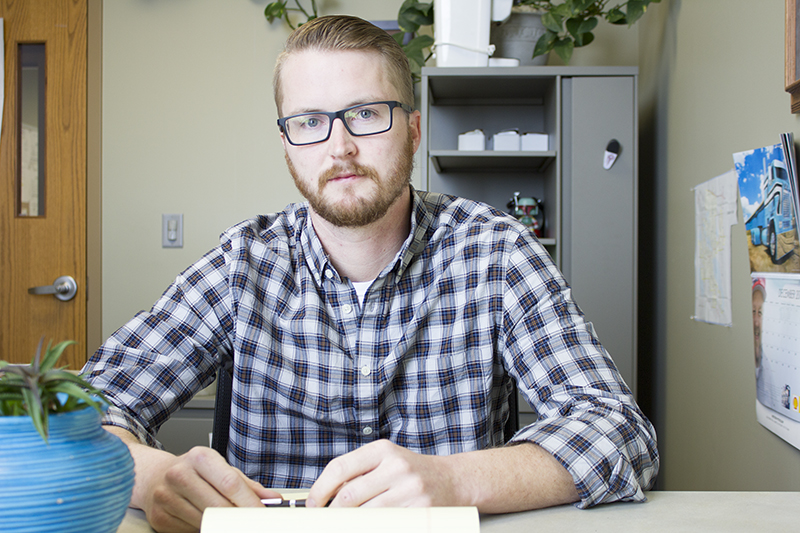 He assists a client and continues his work, which might not end when he leaves the office late that afternoon.

For Routh, though his work is sometimes difficult, the fulfillment he receives for assisting at-risk youth makes the stress well worth it.

As a court services officer, Routh’s main caseload involves truancy cases with students who range in age from 12 to 18. Students are deemed truant by the state if they have at least seven unexcused absences in one school year.

“Our goal is to avoid court action,” he said.

“Our goal in the end is to get them attending and get that diploma.”

Routh notices multiple reasons why truant youth do not attend school on a consistent basis, such as bullying, substance abuse, needing to care for younger siblings, a lack of family emphasis on education and academic difficulties.

Resources in Freeborn County assist Routh in his job, and referrals are sometimes made to a children’s mental health unit where anxiety and depression can be treated. Cedar House Inc. also provides an avenue where at-risk youth can be helped.

“We see a lot of anxiety in regards to social setting … students get anxious at school and aren’t wanting to attend because of that,” he said.

Out-of-home care can include group homes in a setting similar to homes, to non-secure facilities that are similar to a juvenile detention facility. Placements can range from a few days to six to nine months.

“We don’t like sending kids out of the home,” he said. “It’s hard on the parents, it’s hard on the student — it’s hard on myself, as well. I don’t ever like seeing a kid go to placement, because it is very emotionally tolling for them, but sometimes it’s necessary.”

Electronic home monitoring is sometimes used to prevent at-risk youth from being out past curfew. He also reaches out to special education providers to prevent truancy cases.

To Routh, despite a heavy caseload, he finds fulfillment in his position.

“It’s not work for me, I enjoy it that much,” he said. “I’ve been here about 2 1/2 years, and I haven’t had a day that I haven’t wanted to come to work, I enjoy it that much. It’s super rewarding when you see a student who gets it. Not all of them do, but when you do see a student who gets it and goes on and betters himself and stuff like that, it’s good to see.

“Ultimately, they’re giving back to the community.”

Routh has witnessed clients change their lives in a positive way after receiving help. A student who at one point was not attending school is now close to earning his GED, which would make him one of the first members of his family to receive the degree.

“I’ve seen kids that have battled addiction, and by the end of the process — whether they did it on their own or with help from us — I mean they beat that addiction, they stayed sober.”

Routh, who used to work at a state prison in Faribault, said he wanted to work in a position similar to the one he has now for about 10 years because of the interaction with the public a court services officer has and the legal aspect of the job.

“I’ve always enjoyed working with people, and that’s why I went into this,” he said.

A Freeborn County native, Routh said that was part of what drew him to apply for the position.

“So it really was a blessing.”

Some of Routh’s clients are guarded and sometimes personalities don’t mesh, but Routh said being personable is the key to communicating with at-risk youth.

“The style I take is being personable,” he said. “I mean, you need to meet people where they are at. You can’t fully understand their situation, but you can at least hear them and try to come up with a plan based on what their situation is.”

Though it is important to have a rapport with clients, it is also important for Routh to let his clients know when their behavior needs to be addressed.

Routh sometimes receives phone calls and text messages from law enforcement officers or clients who are in a crisis situation. Most times when he is awake he responds, even when he is at home.

“That’s not something that you can just turn off and walk away from,” he said. “It’s something you need to address and set them up with the resources they need.”

Routh sometimes encounters people in the community when he is off work. Some hold animosity toward him, while others appreciate him for the work he does.

His work with at-risk youth sometimes comes at a critical point in their lives. Addressing negative behavior in juveniles can prevent future criminal acts and lead to adults who give back to the community in a positive way.

Routh plans to be in his position well into the future in a community he calls home.

“It’s an excellent field to go into,” he said. “I mean, it takes thick skin at times, but it’s rewarding as well. I’ve been here 2 1/2 years, and I’ve enjoyed every day of it. At times it’s emotionally tolling and stressful, but in the end, it’s where I want to be.”