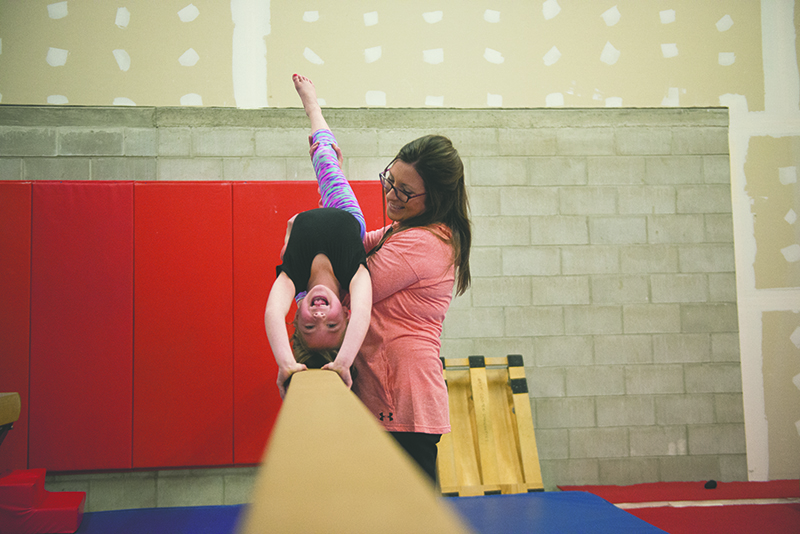 After realizing that taking her daughter, Laina, back and forth between Albert Lea and Owatonna for gymnastics classes wasn’t going to work anymore, Nicole LaFrance decided to open her own studio. - Colleen Harrison/Albert Lea Tribune 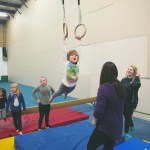 With a bit of a boost for some, gymnastics students try out the rings equipment during a group class. 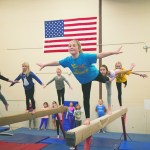 Classes are available for a variety of ages and grade levels at Albert Lea Gymnastics Club. 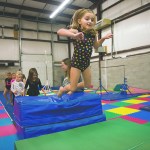 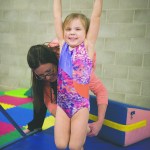 LaFrance shows a student how to point their toes during a preschool gymnastics class. 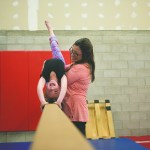 After realizing that taking her daughter, Laina, back and forth between Albert Lea and Owatonna for gymnastics classes wasn’t going to work anymore, Nicole LaFrance decided to open her own studio. – Colleen Harrison/Albert Lea Tribune

Woman takes passion for gymnastics and opens up own studio

After realizing that taking her daughter back and forth between Albert Lea and Owatonna for gymnastics classes wouldn’t be practical, Nicole LaFrance decided to take a risk and open her own studio.

LaFrance started in gymnastics herself at a young age and competed up through middle school. Although she took part in many different activities throughout high school, gymnastics always remained close to her heart.

She searched the area for a building with the appropriate amount of space for the equipment, all while gathering a load of support from community members and organizations.

About three years ago, LaFrance approached Albert Lea City Manager Chad Adams about looking for a building that had enough height and width to accommodate a gymnastics studio. She said Adams has always been in the loop over the years and has been a big help during the process.

She took notice of the old Veterans of Foreign Wars building on Clark Street next to The Meraki Studios and asked the owner, Holly Karsjens, what she thought about collaborating.

“I had mentioned to (Karsjens) that I was thinking about the old VFW building,” LaFrance said. “Because that building needed a lot of work, she offered to let me try teaching a class at Meraki to see if I liked it.”

LaFrance started out teaching a class at Meraki a year ago. She taught a tumbling class for young children that involved balance beams and tumbling aids. It was a class LaFrance described as very successful.

“It went very well,” she said. “The kids loved it. They wanted to come back every day of the week. At the end of it all, they wanted more stuff. So I thought it would be a great thing while everyone was still excited about it, that maybe we could try and start something in town.”

Adams then mentioned the opening of one of the suites at the Northaire Industrial Park. Although she thought it might be a little narrow, she decided it would be great for her new business.

LaFrance obtained the building space and then flew cross-country to buy gymnastics equipment from a closing studio and drove it back to Albert Lea. It took about two months to get everything set up, and she said they had a ton of volunteer help in getting everything in place.

Since opening, she has had a lot of growth in terms of the number of children who have enrolled in classes. Their ages vary from children just learning to walk up to high school-age children. She said taking part in gymnastics can help a person improve and learn in many aspects of life.

“I think it’s the best thing you can do for fine and gross motor skills and for balance and coordination,” LaFrance said. “You can take a lot of the things you learn here and apply them in almost any other sport. There are all these skills that you have to have for other sports, and I think being in gymnastics can greatly help those.”

She said gymnastics can help people build their mental strength as well. There are many difficult maneuvers in gymnastics, and it takes a lot of hard work and determination to keep practicing at something that is difficult. She said people develop a tougher mindset, which helps them in their everyday lives.

Albert Lea Gymnastics Club offers a variety of classes throughout the week as well as open gym sessions. There is a mommy and me class on Thursday mornings, which is for children starting to walk up to about 3 years old. There are scheduled classes for preschoolers, kindergarten through third grade, fourth through seventh grade, and eighth grade and up. Open gym sessions are available from 10 to 11 a.m. every Thursday and from 10:30 a.m. to noon Saturday.

As for the future, LaFrance hopes to set up a class or open time for adults to come and try out the equipment. She also hopes to get a team of gymnasts together at some point to take to showcases and compete against other teams.

LaFrance is grateful for all of the support she has received from everyone in the community and wanted to give a special thanks to her husband, Darin. She said he is one of the main reasons the building looks the way it does today and is thankful for all of the late nights he has put in.

“I love all of the support that I am getting from my coaches,” she said. “I like hearing out in the community that the kids are having a lot of fun. That’s really important to me, because I want to bring something fun to town where everyone enjoys themselves and can’t wait to come back.”