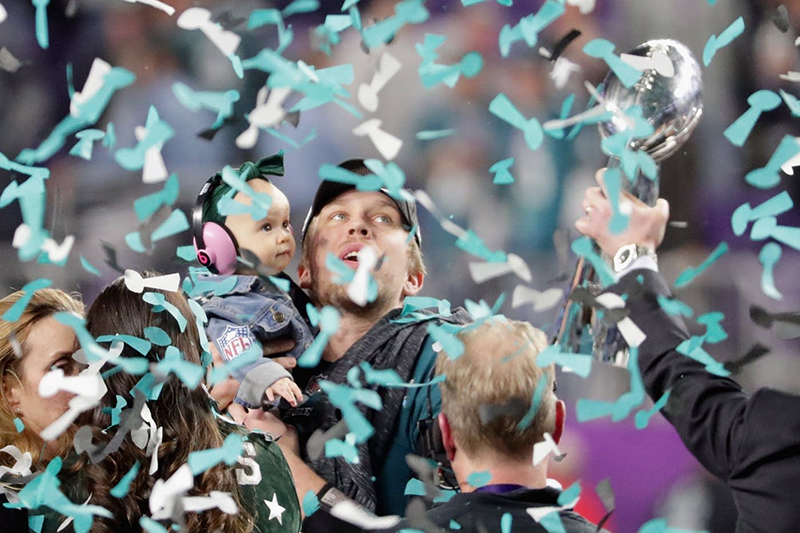 Foles: ‘We dreamed about this moment’ since young

MINNEAPOLIS — As their delirious fans sang their theme song and their owner lifted the Lombardi Trophy, the Philadelphia Eagles’ finally could breathe freely.

Yo, Philly, you really did beat Tom Brady and the New England Patriots in a thrilling Super Bowl that rewrote the offensive record book.

Nick Foles guided the drive of a lifetime, Zach Ertz made a bobbling touchdown catch that had to survive replay review, and an exhausted defense came up with not one but two stands in the final moments Sunday for a 41-33 victory. For the first time since 1960, the Eagles are NFL champions. 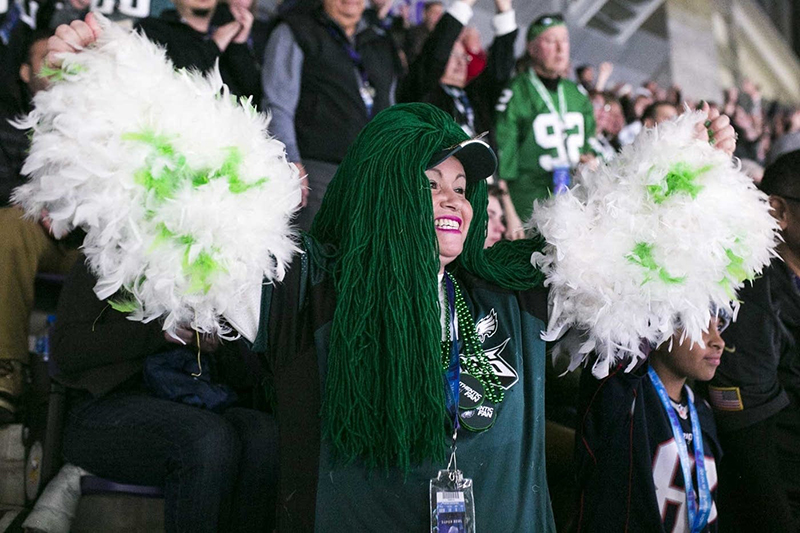 Maria Torres of Philadelphia cheers as the Eagles pull back ahead in the fourth quarter. Evan Frost/MPR News

In a record-setting shootout between backup QB Foles and five-time champ Brady of the favored Patriots, Foles led a pressure-packed 75-yard drive to the winning touchdown, 11 yards to Ertz with 2:21 to go .

Brady got his team to midfield, but his desperation pass fell to the ground in the end zone.

“For us, it was all about one stop we had to make. We went out here and made that one stop,” Graham said.

The underdog Eagles (16-3), even injured starting quarterback Carson Wentz, came bolting off the sideline in ecstasy while Brady sat on the ground, disconsolate.

It was the first Super Bowl title for Philadelphia (16-3), which went from 7-9 last season.

Super Bowl MVP Foles orchestrated the victory with the kind of drive NFL MVP Brady, a five-time champion, is known for. The drive covered 14 plays, including a fourth-down conversion.

“I felt calm. I mean, we have such a great group of guys, such a great coaching staff,” Foles said. “We felt confident coming in, and we just went out there and played football.”

The Eagles had to survive a video replay because ball pop into the air as Ertz crossed the goal line.

“If they would have overturned that, I don’t know what would have happened to the city of Philadelphia,” Ertz said. “But I’m so glad they didn’t overturn it.”

The touchdown stood — and so did thousands of green-clad Eagles fans who weren’t going to mind the frigid conditions outside US Bank Stadium once they headed out to celebrate. But not before a rousing rendition of “Fly Eagles Fly” reverberated throughout the stands once the trophy was presented to Lurie. Later, fans danced along with the “Gonna Fly Now,” the theme from “Rocky,” the city’s best-known fictional underdog.

Then Foles made them forget Wentz — and least for now — with the gutsiest drive of his life.

“We couldn’t make a play to give the ball back to the offense,” Patriots cornerback Stephon Gilmore said.

Foles has been something of a journeyman in his six pro seasons, but he has been spectacular in four career playoff games. He finished 28 of 43 for 373 yards and three TDs.

It was such a wild game that Foles caught a touchdown pass , and Brady was on the opposite end of a Danny Amendola throw that went off his fingertips.

Eagles coach Doug Pederson brought home the championship in his second year in charge. Belichick is 5-3 in Super Bowls and his teams have only a plus-4 overall margin in those games.

So this one was in keeping with that trend: breathtaking and even a bit bizarre.

Brady and the Patriots looked ready for another comeback by opening the second half with a 75-yard touchdown drive. Gronkowski was unstoppable, grabbing four passes for 69 yards, including the 5-yard score.

Philly didn’t flinch, answering with a precise 75-yard march and three more third-down conversions; the Eagles were 10 for 16. The last was on Foles’ perfect pass to Clement over double coverage. The rookie’s reception was upheld by review, and the Eagles were back on top by 10.

Brady shrugged and, getting steadfast protection, connected with Chris Hogan from the 26 for another touchdown.

When all the Eagles could manage was Elliott’s 42-yarder for a 32-26 lead, it seemed inevitable the Patriots would go in front, then become the first repeat Super Bowl winner since they did it in the 2004 and ‘05 games.

Foles, Ertz, and — at last — a revitalized defense said otherwise.

The weird image of Brady ambling downfield on a pass pattern came three plays after New England lost receiver Brandin Cooks to a concussion on a vicious but clean hit by Malcolm Jenkins in the second quarter. Amendola’s pass required an over-the-shoulder grab and the ball fell off Brady’s outstretched hands.

Brady got back to passing after a wild interception. Alshon Jeffery nearly made a spectacular catch near the Patriots’ goal line, only to juggle the ball into the air. Duron Harmon picked it off at the 10. Moments later, Brady was connecting with Chris Hogan for 42 yards.

James White broke several tackles with a brilliant 26-yard run and it was 15-12. That gave White seven touchdowns in his past three postseason games, including the overtime winner in last year’s Super Bowl.

But the Eagles still had 2:04 left in the half — and some more magic in their bag.

A short third-down throw to rookie Corey Clement on a circle route turned into a 55-yard explosion down to the Patriots 8. Philly got to the 1 and on fourth down, it was Foles’ turn to morph into a receiver.

He did better than Brady. On fourth down, Clement took a direct snap, pitched to tight end Trey Burton, and the former Florida QB hit an uncovered Foles. The Eagles were up 22-12 at halftime, the most points New England has allowed in the opening half of a Super Bowl under Belichick.

Each team started with 67-yard drives to field goals — New England had never scored a first-quarter point with Brady in a Super Bowl.

When LeGarrette Blount, who won the title last season with the Patriots, scored on a 21-yard burst, Pederson went for 2, but the pass failed, making it 15-3.

The Eagles and Pederson brushed it off and stayed with their usual aggressive approach. Breathtakingly, it eventually paid off.