Goldie Rebecca Shaw of Ventura, California, went to be with her Lord Saturday, Feb. 17, 2018, in Thousand Oaks, California, a day after her 90th birthday. Goldie was with her husband, George, and daughter, Becca, when she passed of complications from a 17-year battle with lymphoma. On Feb. 16, she was surrounded by her children, grandchildren and friends from Ventura Missionary Church. 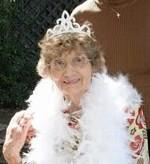 Goldie Dugstad was born Feb. 16, 1928, in Spring Valley and grew up on a rural farm as the youngest of six children to Lewis and Lillian (Halling) Dugstad. After graduating Spring Valley High School, Goldie graduated from St. Olaf College in Northfield, then taught English and Spanish to students in Oregon, Wyoming, Albert Lea and Staples. While in Albert Lea, Goldie taught Sunday school and started a local program for Recovery.org, which assists people with mental health issues. Years later she was awarded the key to the city of Albert Lea for her efforts helping those in need.

Goldie married George Shaw on June 17, 1978, in a religious ceremony on the beach in Venice, California, and moved to Ventura in 1985, where they were members of Ventura Missionary Church for over 30 years. From 1993 to 1994, Goldie and George ran the Christian Friends of Israel in Jerusalem, where they were missionaries to Jewish immigrants relocating to Israel from all over the world who needed guidance and necessities. For years, G2, as their children referred to George and Goldie, were global gospel representatives for the Global Grace Fellowship of Monrovia, California, and as missionaries for them witnessed to students on college campuses, while handing out bilingual Bibles in Hebrew, Spanish and other languages for a cross-cultural ministry in the U.S.

It was said Goldie always had a smile on her face when it came to teaching others about the Lord, and looked forward to her visits to colleges with George.

She was preceded in death by her parents; her brothers Earl and Lloyd Dugstad; and her sisters Doris Falt and Shirley Stilwell.

Goldie’s service will be at 1 p.m. Saturday at Ventura Missionary Church in Ventura. An open celebration of life will follow in VMC’s Firestone Room. Her family will be there to greet guests.

A memorial service will take place at a later date in Austin with burial in Spring Valley.

In lieu of flowers, consider — in Goldie’s memory — a gift to “Missions” at Ventura Missionary Church.