Guest column: Game described as ‘incredible,’ ‘an experience of a lifetime’ 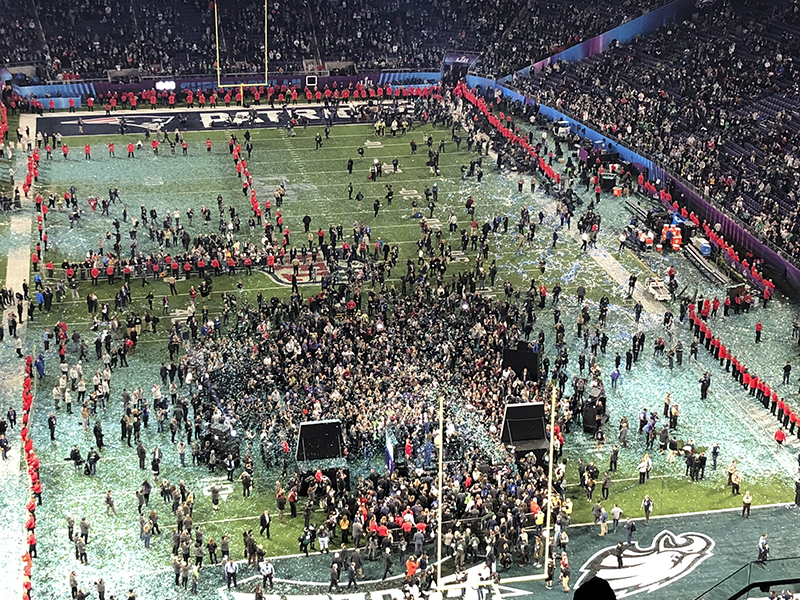 The field after the conclusion of the Super Bowl game was one of celebration. Tyler Julson/Albert Lea Tribune

A little over eight months ago I was just a college senior, hoping to land an internship so I could earn my last college credits and graduate. Fast forward to today, and I just finished covering what a lot of sports journalists would consider the pinnacle of the business — the Super Bowl.

It all started around mid-August, when I was talking with one of my good friends about my job. He suggested that I should try and get media passes to the Super Bowl this year because it was in Minneapolis. I told him there was no way they would credential me. I was still a novice, not even a year into my first job out of college. Well, after a long waiting process, I was approved to not only attend the Super Bowl, but I had a pass that could get me into any NFL-sponsored event the entire week.

I arrived in Minneapolis on Monday afternoon to take part in the annual media day event. This year it was dubbed “Super Bowl Opening Night.” After picking up my week of game credentials from the Mall of America, I headed to the Xcel Energy Center, where the event was held.

Immediately upon arrival, I was star-struck. There were many TV personalities and people I grew up idolizing in the sports journalism industry. Right away I recognized Guillermo, from “Jimmy Kimmel Live.” Teddy Bruschi, Steve Levy, Katie Nolan, J.B. Smoove, Peter King, Dave Portnoy — all of the big time sports media were present. I even made a small appearance on ESPN just behind the anchor desk.

Then, of course, there were the players themselves. Tom Brady was the favorite gathering spot for the majority of the media in attendance. There was at least 250 to 300 people surrounding his podium the entire time he was there. But, there was also Bill Belichick, Nick Foles, Lane Johnson, James White and many other players available during my time on the floor.

I had been to an NFL game before, but there was something about it being the Super Bowl that made it feel more special.

Not knowing how crazy the traffic and pedestrian congestion would be, I arrived in the Cities at 9:30 a.m. Sunday. Surprisingly, there was little to no traffic at all. I’ve been to random Twins games during the week where the traffic was worse.

After sitting in the media room at the Mall of America for a few hours, all the media were bussed to the stadium and screened upon entering.

I got to my seat and time felt like it flew by. I sat there for around five hours before kickoff, but it seemed like it was an hour at most. Before I knew it, it was time for kickoff.

I have to admit, I had a bit of a rooting interest in New England. I don’t particularly like the Patriots, but I just want to tell my children and grandchildren that I grew up watching the best quarterback to play the game, Tom Brady. He’s still the greatest, even without this win, but it would have been cool to see one.

The halftime performance started out a little slow for me, but it picked up towards the end and was pretty enjoyable.

As for the game itself, it was incredible. The only thing I wish would have happened differently is Brady catching that pass and walking into the endzone. The heavily leaning Philadelphia crowd would have went off the walls.

I am so grateful to the Tribune for allowing me to travel to Minneapolis to take part in all of the festivities and the game. It has truly been the experience of a lifetime, and I can only hope I’m still around when the Super Bowl makes its way back to the Bold North.

Tyler Julson is a sports writer for the Tribune.