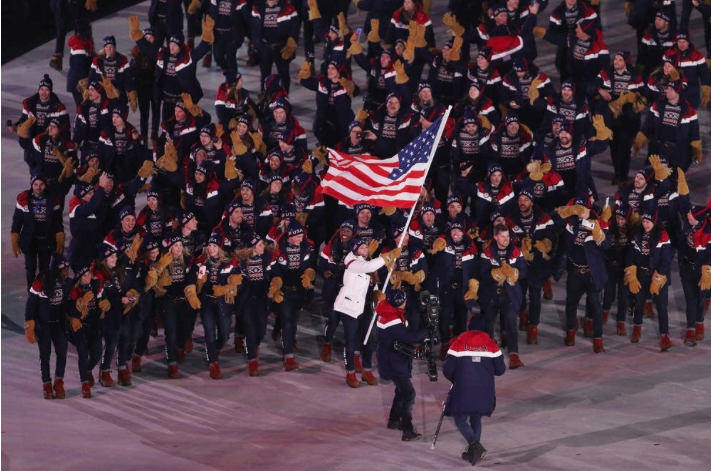 Minnesota is a stronghold for winter Olympians, with the third-largest delegation of athletes headed to compete in Pyeongchang, South Korea, in the Winter Olympics.

Only Colorado and California will send more athletes to the Olympics, which began last week and run through Feb. 25.

Get to know the athletes from Team USA (and one from Team South Korea) who have ties to Minnesota.

David Chodounsky, 33, is a two-time Olympian (2014, 2018) born in St. Paul and now lives in Crested Butte, Colorado. He started skiing at 2 years old when his parents mounted whittled wooden planks on his feet.

“I fell down, started crying, and that was about it for that year,” he said on his website, “so I guess I officially began skiing at the age of (3).”

He joined the ski team at Dartmouth College, and has finished 11th in the giant slalom and 12th in the slalom in the 2017 World Championship.

Wiley Maple, 27, is a first-time Olympian born in Minneapolis and lives in Aspen, Colorado. Skiing is a family tradition; his father, Mike, helped the University of Colorado Boulder to two NCAA ski racing titles, and his sister, Alex, also skied at the same university.

Maple took sixth in the 2009 and ninth in 2010 FIS Junior World Championships in downhill racing.

According to his U.S. Ski Team site, if he’s not skiing, he’s out hiking, biking and enjoying the mountains of Aspen. Aside from sports, he likes “hanging out with good people and kicking back to a little classic rock or bluegrass.”

Lindsey Vonn, 33, was born in St. Paul and lives in Vail, Colorado. Vonn is a four-time Olympian with a gold and bronze medal from 2010. She has raced during the games at Salt Lake City, Torino and Vancouver, when she captured a gold in downhill and a bronze in super giant slalom.

Vonn also holds the American record and is ranked second in the world for most International Ski Federation World Cup victories.

Biathlon athlete Leif Nordgren, 28, born in Marine, attended Forest Lake High School in Forest Lake and lives in Colorado Springs, Colorado. He has participated in the sport since 2007.

According to his Team USA biography page, his dream vacation is “somewhere where you can ski and then sit on the beach in the same day.”

Jessie Diggins, 26, born in St. Paul and a Stillwater High School graduate in 2010, now lives in Afton. She is a two-time Olympian in the cross-country skiing event, and in 2014 Sochi took eighth place in the 15-kilometer skiathlon.

Her personal website says she enjoys other adrenaline-adventures like cliff jumping and sky diving, and she likes raspberries and pickles. “Separately, not together,” she writes.

Rosie Frankowski, 26, born and raised in Minneapolis, is headed to her first Olympics in cross-country skiing. She began cross-country skiing on the Southwest High School team, and raced on the Northern Michigan University NCAA Nordic skiing and cross country running teams.

Frankowski now races as part of the Alaska Pacific Nordic Ski Center, and took 26th in the 2014 FIS U23 World Championships 15-kilometer skiathlon, and 38th in the 10-kilometer classic.

The Pyeongchang games will be her first Olympic competition. She also competed in the 2015 and 2013 FIS U23 World Championships.

Cory Christensen, 23, was born and raised in Duluth and graduated from the University of Minnesota-Duluth. As a skip, she’ll serve as an alternate to the mixed doubles team in curling.

Christensen is a four-time U.S. junior champion, took silver in the 2016 world junior championship and bronze in Women’s National Championship. Her team also took third in the Olympic Team trials.

Tyler George, 35, was born and lives in Duluth, and plays as vice skip of Team Shuster. The team placed first in the Olympic team trials and took fourth in 2014 Olympic trials.

Landsteiner also played on teams that won the U.S. National Championships in 2017 and 2015, and second in 2016. He also received USA Curling’s Athlete of the Year in 2014, and played on the Minnesota state high school championship team in 2007, 2006, and 2004. He curls from the Duluth Curling Club.

Joe Polo, 35, was born in Cass Lake and lives in Duluth. Polo took bronze at the 2006 Olympics in Turin, Italy, in curling. A six-time U.S. men’s national champion, he also won bronze at the 2016 World Mixed Doubles Championship.

Polo will serve as an alternate for the Team Shuster. Polo attended Bemidji High School, and went to Bemidji State University and the University of North Dakota.

Aileen Geving, 30, born and lives in Duluth, will attend her first Olympic Winter Games playing second on Team Roth for the U.S. women’s curling team. She began curling in 1996.

Geving has also won the 2014 and 2015 World Women’s Championship, and 2007 and 2004 World Junior Championships, and is a two-time junior national champion. She curls from the Duluth Curling Club.

In an interview with MPR News in early February, Gelving said she works in insurance but she also keeps a grueling competition schedule, which almost feels like a second job.

“We have probably three or four weekends a month we are on the road training or competing,” she said. “And most of our tournaments, we leave on a Thursday and maybe don’t come back until a Monday.”

Tabitha Peterson, 28, born in Burnsville and lives in St. Paul, will play on Team Roth as the vice skip. She took home the bronze medalist in both the 2016 World Mixed Doubles and the 2010 World Juniors.

In an interview with World Curling TV in 2017, Peterson said she is a fan of “Grey’s Anatomy,” and told an embarrassing memory as a child during Halloween because her dad is a dentist.

“Every Halloween, we’d be the house that gave out toothbrushes. Some people loved it, some people hated it,” Peterson said.

John Shuster, 35, was born in Chisholm and attended college at University of Minnesota-Duluth. He has played in three Winter Olympic Games, taking home a bronze in 2006.

He has also placed third in the 2016 World Championships, and was the Continental Cup champion in 2016, 2014 and runner-up in 2003. He also won gold in the World University Games in 2007. He lives in Superior, Wisconsin, and plays from the Duluth Curling Club.

Caroline Claire, 18, born in Edina, competes in the Slopestyle event in freestyle skiing. She now calls Manchester Center, Vermont, her home. Skiing since she could walk, she won the USASA Nationals in 2014.

Claire took home bronze in the 2017 and 2015 FIS Junior World Championships. This will be her first Olympics competition.

She also competed through the Revolution Tour in 2016, and earned podium finishes in each appearance, including wins at Winter park and Seven Springs.

Will Borgen, 21, was born in Fargo, North Dakota, and calls Moorhead his hometown. He was named to the 2016 NCHC All-Rookie team in his first season with St. Cloud State University as a defender.

Borgen secured a bronze medal with Team USA at the 2016 IIHF World Junior Championship. He also was selected in the fourth round of the 2015 NHL Draft by the Buffalo Sabres.

Hannah Brandt, 24, was born in Maplewood and calls Vadnais Heights her hometown. She played with the University of Minnesota; the team earned three NCAA national championships when she played as a forward.

Brandt and her older sister, Marissa, will attend the Pyeongchang games for ice hockey, but for different teams. Marissa will play for team South Korea.

Marissa Brandt, 25, was born in South Korea and now has South Korean citizenship, but grew up in Vadnais Heights, attended Hill-Murray High School and played hockey for Gustavus Adolphus College as a defender.

Brandt, who will skate under her birth name, Yoon Jung Park, had 13 goals and 21 assists during her career with Gustavus from 2011 to 2015. She also played on the World Championship Division II team in 2017 for South Korea.

Brant has said that in the past, she didn’t have a strong connection to her Korean birth country. Now, with her time playing on the national team, she has learned the language and the culture from her new teammates. The moment her team won the Division World Championship changed her perspective.

“We were lined up and watching the flag being raised. I was, literally, in that moment, so proud to be Korean. I wasn’t ashamed about it in anymore,” Brandt said. “I realized that it’s OK to be Korean and American. And I’m excited to do this with my family, with my team and with my countries.”

Brandt and her younger sister, Hannah, will attend the Pyeongchang game for ice hockey, but for different teams. Hannah plays as a forward for Team USA.

Dani Cameranesi, 22, was born and raised in Plymouth and played for the University of Minnesota in two NCAA national championships as a forward. As a senior, she was named team assistant captain, and in her junior year led the Western Collegiate Hockey Association in scoring.

Marvin helped the Boston Pride win the Isobel Cup in the inaugural year of the NWHL in 2015-16, and the Clarkston Cup for the Boston Blades in 2012-13.

Sidney Morin, 22, was born and lives in Minnetonka and helped the Minnetonka High School win three consecutive state titles. She had a career-high 24 points in her senior year at the University of Minnesota Duluth, and was named the WCHA Defensive Player of the Year the same season.

Morin also earned a silver in the 2013 IIHF U12 Women’s World Championship. She also played a portion of the 2017-18 season with MODO Hockey of the Swedish Women’s Hockey League and was named assistant captain.

Kelly Pannek, 22, was born and lives in Plymouth and played forward for the University of Minnesota, where in the 2016-17 season she led the nation with 62 points and 43 assists in 39 games, and helped the team capture two NCAA national championships. Her freshman season in 2014-15, she led all NCAA freshmen with 44 points and was named to the All-USCHO Rookie team and the WCHA All-Rookie Team.

Maddie Rooney, 20, was born in Duluth and calls Andover her hometown. She played two years of collegiate hockey as a goalie for the University of Minnesota Duluth and will be the first female goalie from Minnesota to participate in the Olympics, according to minnesotahockey.org.

In 2017 she held a shutout in her Team USA debut in a preliminary game against Russia in the IIHF Women’s World Championship tournament. The team went on to win gold. She also earned gold at the Four Nations Cup the same year.

Ryan Stoa, 30, was born in Minneapolis and calls Bloomington his hometown. Stoa played for the Spartak Moskva for two seasons; he was named a 2017 KHL All-Star from the Spartak Moskva-Metallurg Novokuznetsk and Neftekhimik Nizhnekamsk in the KHL. He also played for the Washington Capitals in 2013 for three games and the Colorado Avalanche during the 2009-10 and 2010-11 seasons.

He also played for the University of Minnesota, and was the WCHA scoring champion with 24 goals and 22 assists in 36 games his senior year in the 2008-09 season, and helped Minnesota win the WCHA championship his sophomore year.

Lee Stecklein, 23, born in St. Paul and calls Roseville home. A member of the 2014 Sochi Olympic games that took home a silver medal, Stecklein plays defense and has participated in the women’s IIHF Women’s World Championship, winning gold in 2013, 2015, 2016 and 2017, and played in four Four Nations Cups, with two first-place finishes, a second place in 2014 and third in 2013.