Instructors share their passion for dance at Just For Kix studio 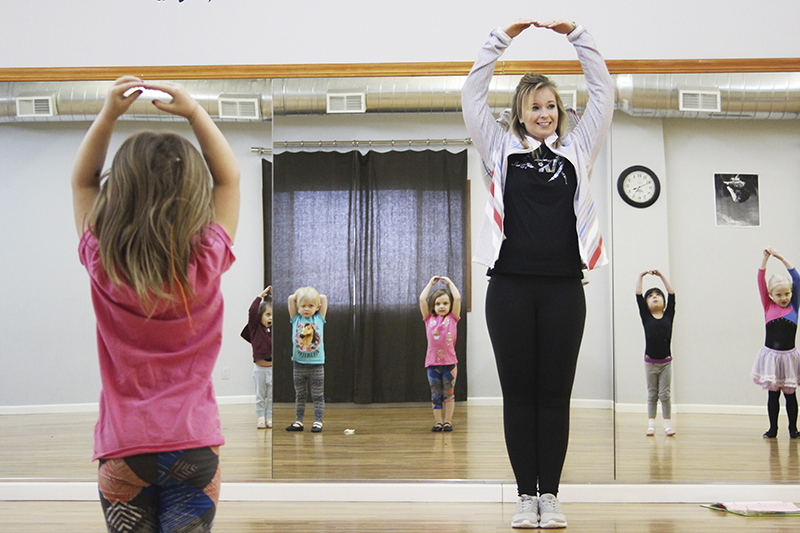 Holly Jackson leads a class of four-year-olds through a routine themed around Valentine's Day. Together, they make the "O" as the song spells "love." Sarah Kocher/Albert Lea Tribune 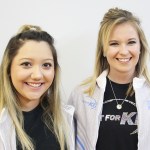 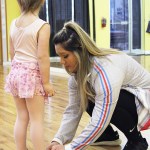 Mitzi Lehocky ties a dancer’s shoe as they prepare to run through their routine one more time. Sarah Kocher/Albert Lea Tribune 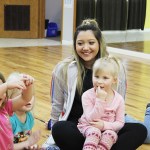 As the dancers get ready for rehearsal, they share their favorite Valentine’s Day treats. Sarah Kocher/Albert Lea Tribune 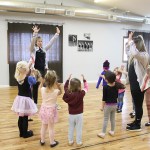 The dance class warms up along to a song. Sarah Kocher/Albert Lea Tribune 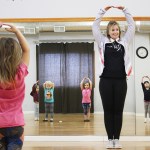 Holly Jackson leads a class of four-year-olds through a routine themed around Valentine’s Day. Together, they make the “O” as the song spells “love.” Sarah Kocher/Albert Lea Tribune

The full-length mirror catches nine small dancers in a line, placed carefully in spots marked by the toe of their instructor. They’re preparing a Valentine’s Day dance. They can see themselves reflected in their black or pink dance shoes, in tutus or stretch pants. At the front of the class, backs to the mirror, are two instructors who made the 180-degree transition from students to teachers.

“It was different, because I was always learning from someone else,” Just For Kix head instructor Mitzi Lehocky said.

Holly Jackson, now the director at Just For Kix in Albert Lea, has been with the program for 11 years. Lehocky has taught in different capacities at Just For Kix for three. Jackson mainly teaches kick, jazz and lyrical to dancers between ages 3 and 18, and Lehocky teaches tap and hip-hop.

“I’ve been dancing since I was, like, 3,” Lehocky said. She’s had experience dancing in a studio and as a member of a dance team. Her dancing has been influenced by geography: She moved from Texas in the sixth grade.

For Jackson, she started right where she is now: with Just For Kix. One of her friends brought her to a buddy night in middle school, and she kept dancing through high school.

“I just loved the environment,” she said.

Although they’re both teaching, it doesn’t mean Lehocky and Jackson don’t still face the mirror.

“We definitely do have nights where we’ll come to the studio and just dance,” Lehocky said.

In some ways, Jackson said she has seen things she’s learned in dance ring true in other aspects of life.

“I think that dance is so important to have confidence, and I feel like just teaching them to have that on the dance floor, it kind of exudes and carries on through other parts of their lives,” she said.

For Lehocky, the lesson is teamwork — this is what it always comes back to for her as a teacher, she said.

“It’s fun to see them become a little family,” she said.

But just like a family, the trick is avoiding the “favorite sibling” dilemma. Lehocky said the biggest challenge of her role as a teacher is dealing with the interpersonal dynamics between students as they change. Part of this means making sure the team gets along, yes, but it’s also making sure students don’t feel soloists are treated as the only piece of the team.

For Jackson, the job is about balance in more than one way. As director, she said she sometimes struggles to keep a work-life balance.

The reward, though, is seeing her students enjoy themselves, and to hear about the impact she’s having on her students. For Valentine’s Day, Just For Kix has displayed messages from its dancers in the lobby about why they love dance. Some of the answers featured Just For Kix teachers.

It’s a reminder that the experience includes more than just dancing.

“There’s always little eyes watching you,” Jackson said. Therefore, her role as a dance teacher extends outward: it’s about being a good teacher, but also being a good role model and a positive member of the community, she said.

But this is what Jackson loves about teaching, and it’s what Lehocky loves about dance itself: It’s a chance to inspire all ages, encourage kids to have a positive outlook and to express their feelings — and themselves — through dance.