Jeffery Andrew Luecht, 56, of Lake Mills passed away at Mayo Clinic in Rochester surrounded by his family and friends.

A memorial service will be at 3 p.m. Friday at Conner Colonial Chapel, 1008 First St. S in Northwood. The Rev. Randy Baldwin will officiate. Per his wishes, Jeffery’s body has been cremated. 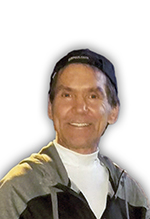 Jeffery was a go-getter and was always finding new things to occupy his time. Whether it be starting a small business venture, picking up new hobbies or trying new activities, Jeffery could be found doing something. He enjoyed time outdoors — fishing the local lakes and rivers, walking around town, riding his bike and especially metal detecting. These joys were shared with the most important people in his life, his family.

Whether it was his love of metal detecting with his brother-in-law, his love of fishing and riding bike with his nephews or playing board games together — time with his family was the most precious thing in life to Jeffery. Jeffery was passionate about playing pool and spending time around the pool table with his nephew, Nate, as well as his many friends and family members. He also found enjoyment in roller skating, a joy he shared with his brother, Terry, and friends for many of their younger years.

He is preceded in death by his parents LeRoy and Zona Luecht; grandparents Augusta and Jonas Luecht and Leland and Olga Baldwin; brother in infancy, Jerold Luecht; and many of his aunts and uncles.