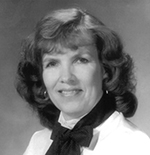 Judith Rae Larson was born March 20, 1940, in Albert Lea to Everet and Pearl (Anderson) Larson. She graduated from Glenville High School before attaining her Bachelor of Science in business education from Mankato State University.

On Oct. 20, 1962, she married Roger Duane Booher at St. Augustine Catholic Church in Austin. The couple was blessed with three daughters and one son.

Judy had many interests, including sewing, attending plays and reading, and she never passed on a boat ride or a trip to the zoo. Bridge was her favorite card game, and she was also an accomplished 500 player. Judy was a great mother, wonderful grandmother and cherished time spent with family and friends.

Judith was preceded in death by her parents Everet and Pearl Larson; and husband, Roger Booher.