Memorial services for LaVerne “Vern” E. Olson will be at 2:30 p.m. Saturday at Bonnerup Funeral Service in Albert Lea. The Rev. John Holt will officiate. Military honors will be accorded by Albert Lea veterans organizations. Interment will be in Graceland Cemetery at a later date. 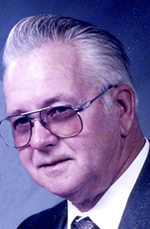 He was born July 2, 1931, in Albert Lea, the son of Vernal and Arlene (Fredrickson) Olson.

He grew up during the Great Depression living a simple life. Vern served his country in the Korean conflict. He married Vera Kaushagen and raised two daughters and a son. He spent many years living on St. Olaf Lake. They were later divorced.

Vern was an over-the-road trucker driving his own truck. He had many friends and was known as “Jellybean.”

Vern retired in 1993 and married Joanne Bergland. He enjoyed yardwork and putting up Christmas lights and decorations for the holidays.

He was preceded in death by his parents; daughter, Jeanette Johnson; and stepson, Jay Bergland.

LaVerne had a heart of gold and will be greatly missed by his family.