An Albert Lea man who allegedly strangled a woman he knew last weekend was charged with a felony Monday in Freeborn County District Court. 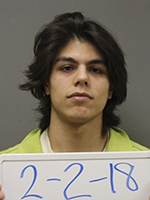 Court documents state Edwards was charged after officers were dispatched Friday to an Albert Lea address regarding a domestic assault.

After officers arrived, the alleged victim said Edwards assaulted her and broke items in the house.

Edwards allegedly grabbed the woman by her neck and squeezed, causing red marks, and threatened to kill her.

Court documents state Edwards admitted getting into an argument with the alleged victim but denied touching her. He admitted taking her cellphone when he learned she planned to call law enforcement, damaging the house and yelling at the woman.

Judge Steven Schwab released Edwards on his own recognizance, contingent on him submitting to random testing, not using or possessing alcohol or controlled substances and following other requirements.

Edwards’ next court appearance is scheduled for Feb. 15.