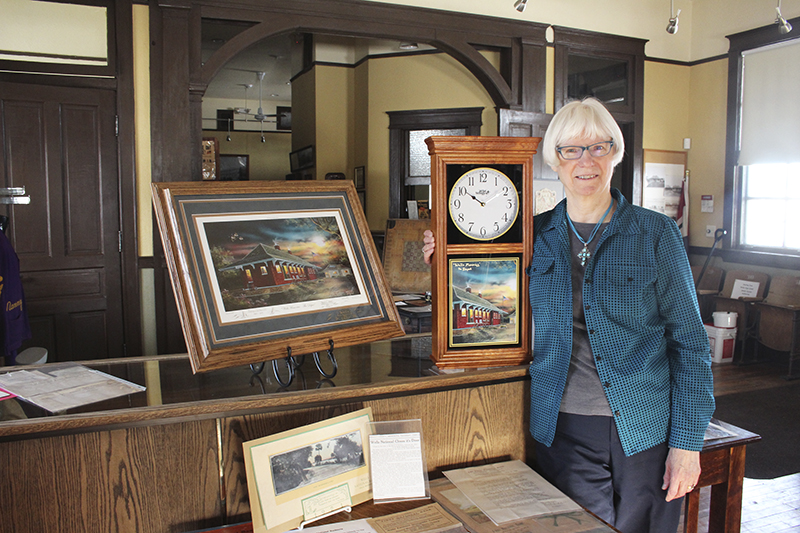 Betsy Hermandson stands in the Depot Museum with a framed print and a clock, which the museum received for selling over 40 prints. Hermandson said the group is considering auctioning off the clock in the future. -Sarah Kocher/Albert Lea Tribune

WELLS — The Depot Museum in Wells has already been immortalized, and now its history is being spread.

Volunteers at the Depot Museum and members of the Wells Historical Society commissioned an artist to create prints of the Depot Museum, which are being sold to help raise money for restoration costs of what was originally built as a lunchroom next door to the depot.

The lithographic prints come from Speltz Studio Wildlife and artist J.D. Speltz, who offers individualized prints for group fundraisers, depicting a scene related to the group. Hermandson said the artist’s fundraising process was recommended to Wells Historical Society President Carmen Meyer in a casual conversation, and they liked the quality of work they could see. 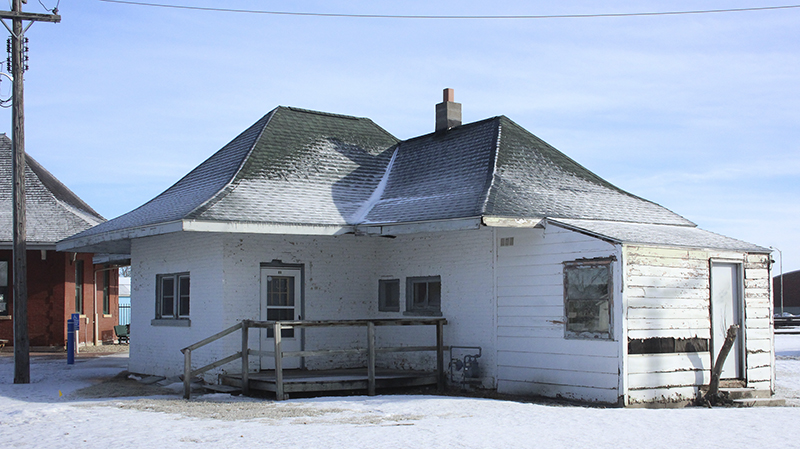 Funds raised from the prints will go toward restoring the depot lunchroom. – Sarah Kocher/Albert Lea Tribune

In the Wells Depot Museum’s prints, you can see the red bricked depot at dusk, lights blazing from the windows, flag raised in front. A trio of geese makes its way out of the left edge of the scene. Off to the opposite side sits the reason for the fundraiser: the small, muted lunchroom, also with lights on inside.

According to Meyer, the depot lunchroom was built in 1903. Hermanson said they just bought it. The goal now is to restore the building and use it as a continuation of the museum.

If you take another look at the print, you can see an old-time wagon sitting sideways in front of the depot. It was an addition.

The print started as an oil painting, which the artist brought in to a meeting with the fundraising group to suggest changes.

“It looked quite finished, but he said, ‘Do you want to add anything?’” Hermanson said.

Hence, the wagon by the freight door.

“We wanted it to look as it was in the past, not as the museum is now, and so he painted it as it would have been in the past, when the lunchroom was an operating lunchroom, too,” Hermanson said.

While there isn’t a specific fundraising goal for the project, the group is planning to sell 150 prints and hopes to earn around $1,500 for the prints. They are available as the print itself or with matting and framing included.

According to Speltz Studio Wildlife’s website, proceeds from the first 40 of the paintings sold offset the studio’s expenses. After those first 40 sales, $15 of the $40 print cost per print goes to the group.

The group has sold over 50 paintings so far. By the time Meyer went to the first sales meeting, she had already sold 11.

“We’ve had a great amount of community support,” she said. Some snowbird residents have contacted her after seeing the print online and asked for one. Hermandson said she hopes the paintings continue to sell quickly.

“Not only are they of historical value, but if you look at them, they’re just a nice print you could hang on a wall anywhere,” Meyer said.

Both Meyer and Hermandson said the event is intended to kick off the Wells’ upcoming sesquicentennial celebration. There is no cutoff date for sales, but Meyer said she hopes some will be available at Wells Kernel Days in August.

According to Hermanson, the most likely next step will be to hire an architect — this is what the fundraising money will probably go toward ­— to assess what work needs to happen on the lunchroom. It will be one of many fundraisers.

“We will just do it in pieces until we get it accomplished,” Hermanson said. “This is our long-term goal.”