Over six decades of ‘going together’ 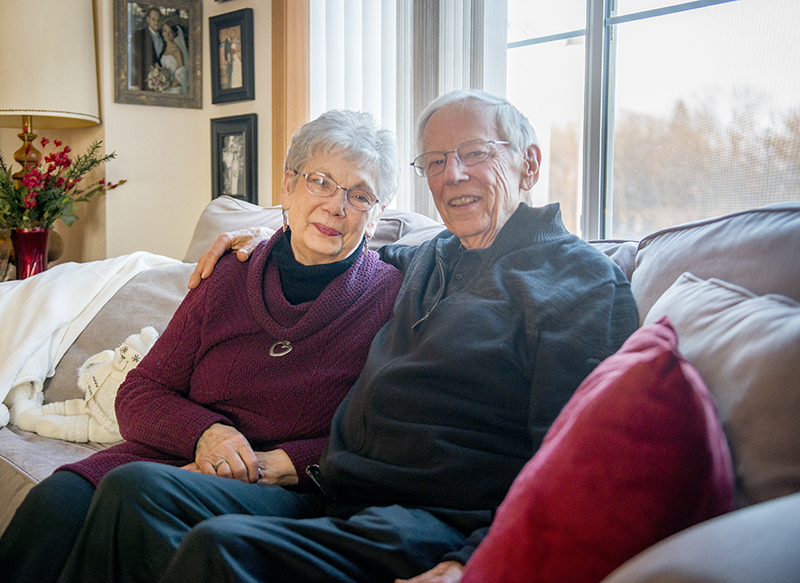 Al and Nancy Stoa have been married for 60 years, and started out as high school sweethearts. - Colleen Harrison/Albert Lea Tribune

In 1953, a boy sat across from a girl in biology class at Albert Lea High School.

The rest is history.

Nancy Stoa — then known as Nancy Skinner — was a sophomore when she first noticed Al Stoa, her future husband. She said she and some of her friends sat across from him at their biology lab table, and Al typically ignored them.

Al was shy because he had definitely noticed Nancy, and didn’t know what to do next. Luckily, fate intervened.

The annual Sadie Hawkins dance was approaching — a dance where the girls traditionally ask the boys — and Nancy’s friends pushed her to ask Al to the dance.

While it took him by surprise at first, Al said the surprise was a pleasant one.

“I was delighted that I was asked, so I wouldn’t have to figure a way to ask her,” he said.

From then on, the couple was joined at the hip, and would even be crowned as King and Queen of Hearts at the dance two years later as seniors.

“We were ‘going steady,’ which is what they called it then,” Nancy said.

While the young couple liked each other from the start, their relationship wasn’t without its doubts from others. Back then, Al came from “the other side of the tracks,” as he put it. He grew up in what he called “the Eddie Cochran neighborhood,” with his family living on Charles Street — where the Albert Lea city pool is today. He said the area was rough then, with more crime than the rest of the town. Younger children would run home from school in that neighborhood, as to avoid issues with the older children.

Nancy, on the other hand, grew up on Park Avenue. Her father owned Skinner, Chamberlain and Co. — which was considered to be Albert Lea’s first “superstore.”

Needless to say, the contrast in backgrounds and upbringing made some question the couple’s relationship. Al said his parents were very accepting and encouraging of his relationship with Nancy, while her parents were a bit standoffish and had more of a “we’ll see” attitude. In addition, there were others telling the couple “it would never work.”

Despite the naysayers, Nancy and Al did have friends who encouraged and supported them, especially when the couple started planning for the future as graduation neared.

After graduating with the class of 1955, Al enlisted in the United States Army and served for two years, but not before giving Nancy an engagement ring.

“I guess he wanted to make sure I’d still be here when he got back,” Nancy said with a laugh.

Nancy went off to Iowa State University while Al served with the Army. The couple wrote to each other every day while Al was in the service, most of which was spent in Germany.

“What’s that they say, about distance making the heart grow fonder?” Nancy said. “That was definitely the case. We learned even more about each other that way.”

Once Al got back from the service, he and Nancy started attending Luther College in Decorah, Iowa, — Nancy for elementary education and Al for sociology. A few months after Al’s return to the U.S., the two got married Dec. 28, 1957. They lived in Army barracks at Luther College, and had their first child — a daughter, Kirsten, in 1958. Two years later, Kirsten would be joined by the couple’s second child, Kari, in 1960. 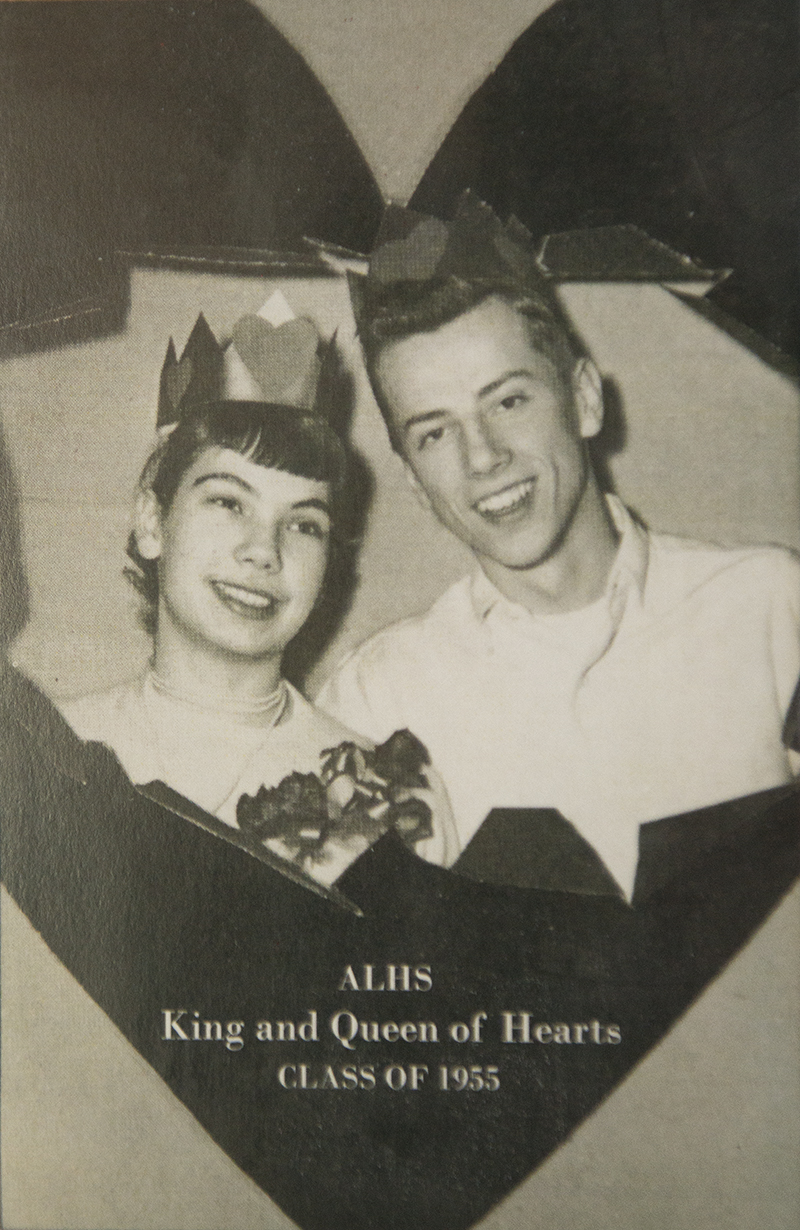 The couple was crowned the King and Queen of Hearts during their senior year of high school in 1955. – Provided

After the birth of their second daughter, Al decided to take a job working with his father-in-law, so the young family of four moved back to Albert Lea in 1961, where Nancy taught kindergarten and preschool as well.

Having grown up going to First Lutheran Church in Albert Lea, Al was once again active with the church, and was mentored by the Rev. Melford Knutson. Al began teaching Sunday school, as well as working with high school students. That time got both Al and Nancy thinking about the church and how to serve, leading Al to the decision of going back to school to attend seminary.

The couple sold their house in Albert Lea and moved up to St. Paul with their two daughters so Al could attend Luther Theological Seminary. During those four years of schooling, Al would attend classes during the day and work at night.

“He didn’t sleep much then,” Nancy said.

Once finished with the seminary, Al would be called down to the Iowa ministry, where the family would remain for about 12 years. Starting out near Sumner, Iowa, and Buck Creek, Iowa, the couple’s youngest son, Leif, would be born in 1971. Al worked as a pastor while Nancy taught off and on — she took jobs where she could be with her children at home when they were younger.

As the years went by and their children grew and moved away, the Stoas would move between the Iowa towns of Clermont, Silver Lake and Northwood, respectively, before moving back to Albert Lea in 2006 after Al retired. He now volunteers through First Lutheran Church in Albert Lea.

The couple’s pride and joy are their five children — with their respective spouses — as well as their 16 grandchildren and 10 great-grandchildren, with two more on the way.

What’s the secret to a long and happy marriage?

“To be kind and giving to one another,” said Al, who will be 81 in a few months.

Nancy, now 81, said forgiveness and thankfulness, and sharing the same values, such as steadfastness, compassion, sensitivity and love of family.

“Nancy has been an excellent and wonderful mother,” Al said. “Love of family and love of people is a big deal.”

Those qualities have helped the couple not only enjoy the happy times, but make it through the trying times, as well. Al faced a cancer scare in 2003, as well as a triple bypass in 2010 and a valve replacement a few years ago. Nancy had a knee replacement right before the couple got into a car accident in December.

“God was good, and everyone was so helpful,” Nancy said. 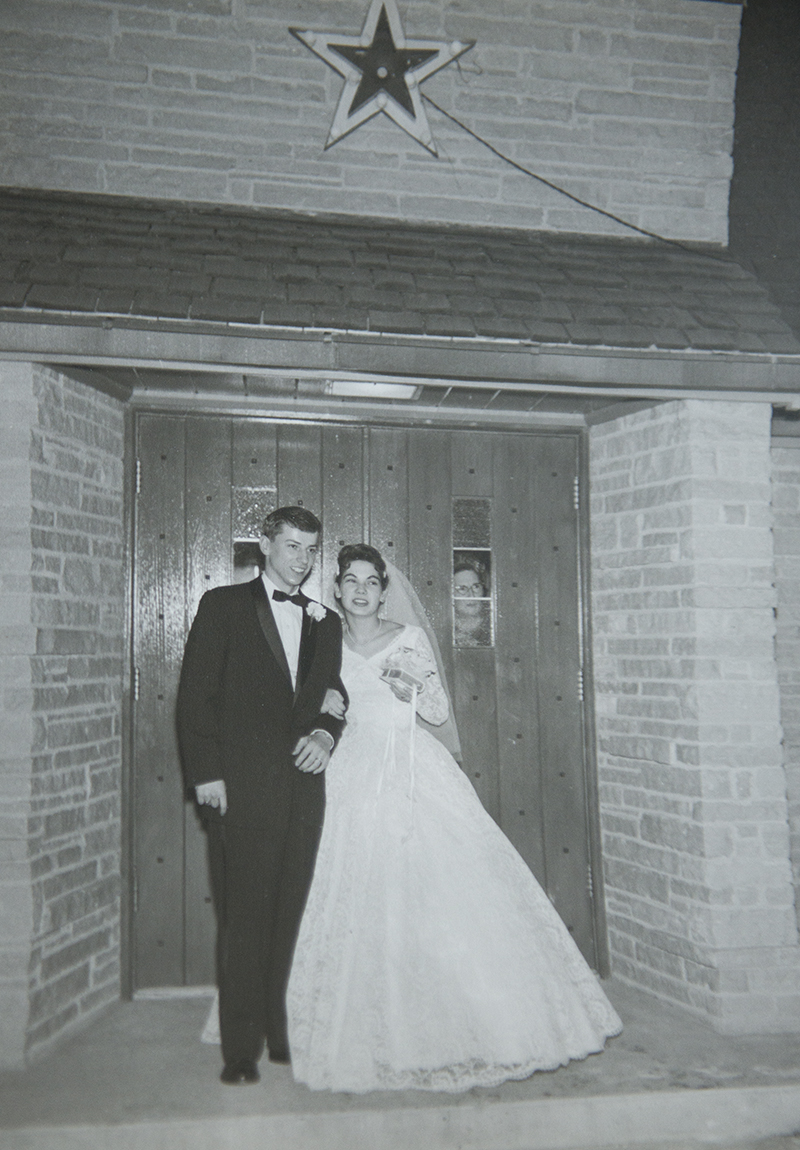